Anita Hassanandani has been giving major inspiration to all the expecting women with her effortless style. On October 30, 2020, she posted her sun-kissed pictures and we canâ€™t stop drooling over them.

The moment a woman comes to know about her pregnancy, her happiness knows no limits. Even though weight gain, hair fall, swollen hands and feet are the obvious changes, an expecting woman makes sure to carry herself in the most beautiful manner throughout the pregnancy. As it is the most beautiful and much-awaited phase in a woman’s life, she makes sure to live it to the fullest. Apart from Kareena Kapoor Khan and Anushka Sharma, Anita Hassanandani is one such actress, who has been surprising us by carrying herself in the most stylish manner throughout her pregnancy. (Also Read: Soha Ali Khan, Kunal Kemmu And Inaaya Naumi Kemmu Twin For Halloween, Little One Steals The Show)

Anita Hassanandani and Rohit Reddy are tagged as the cutest couple of the glamour world. Ever since the actress had announced the news of her pregnancy, the couple has been sharing glimpses of their pregnancy moments. From how they had managed to camouflaged their pregnancy to how everyone had reacted to the much-awaited news, the doting couple has been sharing every detail of the most amazing phase of their lives. And going by Anita’s social media handle, we are in aww of her stylish pregnancy looks.

Anita Hassanandani, who is enjoying every moment of her pregnancy, never skips a chance to share her gorgeous pictures. On October 30, 2020, she took to her IG handle and shared stunning pictures of herself. In the sun-kissed pictures, Anita looked gorgeous as she flaunted her baby bump in a beige-coloured khadi sunflower dress. Giving major fashion goals and pregnancy glow, the soon-to-be-mommy wrote, “Weekend vibes.”

Anita Hassanandani had kept the news of her pregnancy a secret for a few months but she hadn’t kept herself away from posting pictures on social media. She had smartly posted the pictures, hiding her baby bump, though it had sparked off her pregnancy speculations in the media. Sharing four times she had fooled her fans and media by managing to conceal her baby bump, Anita had written, “Four times I managed to conceal my baby bump. Kinddaaa fooled you all!!!” (Also Read: Abhinav Kohli Claims His Son, Reyansh Kohli Is 'Missing', Blames His Estranged Wife, Shweta Tiwari)

On October 27, 2020, Anita had taken to her IG handle and had shared a stunning picture from the sets of Naagin. The picture was taken during the initial phase of her pregnancy when no one was aware about her ‘good news’. Along with the picture, wherein, she had looked gorgeous in her ‘Naagin’ attire and was seen stroking her baby bump, Anita had written, “Initial days when no one had a clue…Dammnnn time is flying by...#MixedEmotions also #MoodSwings.”

Anita, who had conceived naturally at the age of 39, had broken all the stereotypes surrounding the right age to have a baby. In an interview with The Times of India, she had spoken about the same and had stated, “The age-factor did play on my mind. Many people told me that it’s going to be tough, it overwhelms you. But once I conceived naturally, I realised that age is just a number. You need to be mentally and physically fit for everything to fall in place. Jo naseeb mein likha hota hai, woh toh hota hi hai.” Speaking of how she and Rohit had planned the baby when they were ‘ready’ and not when the society 'expected' them to have a child, Anita had said, “Today, Rohit and I feel well-settled — we are financially and mentally in a place where we are ready to have a child.” (Also Read: Ekta Kapoor Shares An Unseen Wedding Picture On Jeetendra And Shobha Kapoor's 46th Anniversary)

Are you also awestruck by Anita’s amazing attires? Let us know. 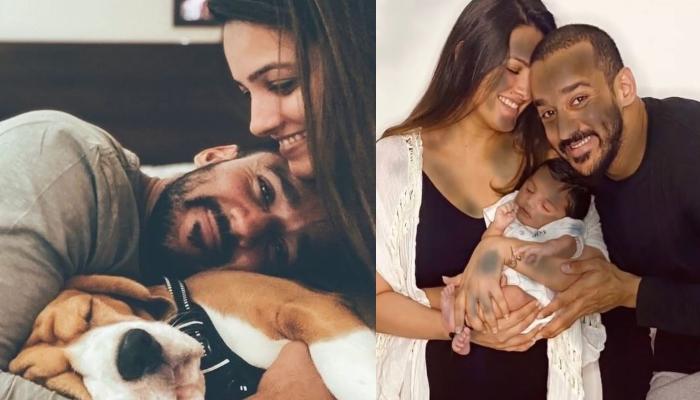 As soon as it’s confirmed that you are expecting, you start planning for the little one’s arrival and shop for the essentials to be fully-ready for your bundle of joy. And just how important it is to baby-proof the apartment with furniture settings, it is necessary for the pet-owners to prepare