Sonam Kapoor Ahuja found solace in a non-industry guy named, Anand Ahuja. The lovebirds got married on May 8, 2018, in a Gurudwara wedding as per Anand Karaj rituals. Here's another PDA wherein Anand went down on his knees to tie Sonam's shoelace! Sonam Kapoor Ahuja found solace in a non-industry guy named, Anand Ahuja. The two had met a couple of years ago, started secretly dating, and were meant to be together for life and beyond. It was on May 8, 2018, that their relationship was solemnised into marriage. (You May Also Like: Aayush Sharma Shares The Most Adorable Picture With Arpita And Ahil In One Frame, Picture Inside)

Ever since Sonam and Anand have tied the knot, we have not only been gushing over their social media PDA but also can’t stop swooning over their PDAs on events. Remember Sonam and Anand were once in Delhi for the promotions of a jewellery brand and the doting hubby would not let go of wifey Sonam Kapoor’s dupatta? In case you don’t remember, here’s the picture:

Well, yet again today on April 18, 2019, Sonam and Anand have set another example. The couple was snapped today at a store launch and whilst the papa were clicking them, the doting hubby again proved to be the best in making Sonam happy as he bent down on his knees to tie her shoelace. Yes, that’s exactly what you read! And without any wrinkles on his forehead, the happily married couple posed with ear to ear smile. Don’t believe us? Checkout yourself (swipe right):

Sonam had earlier talked about life after wedding, and had stated, “It’s the same thing. Life doesn’t change much after marriage. It doesn’t change for a man. So, why should it be different for a woman where work is concerned?” (You May Also Read: Vinny Arora And Dheeraj Dhoopar's Pics From A Wedding Will Make You Feel They Are Getting Married)

In an interaction with Vogue magazine, Sonam had earlier revealed her love life and was quoted as saying, “I was apparently wearing the worst sneakers he had ever seen. I keep telling him that he fell in love with me despite my bad sneaker game… That day, walking and talking in London, I knew he was the love of my life. He apparently knew the first time we spoke on the phone… It was just so easy.” 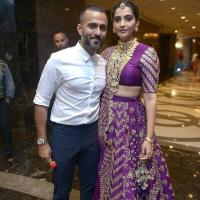 Talking about their similarities and dissimilarities, and how the two keep discovering new things about each other, Sonam had said, “He comes from a business background, so that’s alien to me. I’m the third generation in a film family. So there’s a lot to talk about, a lot to discover about each other, but we have a lot of similarities.” (Do Read: Mohit Sehgal And Sanaya Irani Relive Their Wedding Moments, Share Lovely Pics From Goa)

She had further added, “The first time we met, we talked about our respective work. I was just struck by the fact that I could speak to her so openly about everything. We were chatting on Snapchat one night and she had said, ‘Stop texting, just call me.’ And we spoke for two hours that night. Our friendship started over superficial things like vegan chocolates and sneakers but soon we were having deeper conversations.”

On changing her name post-wedding, Sonam had once told DNA, “I’ve always maintained that I’m a feminist. I have a choice to change my name when I want to do it. The fact is that Kapoor is also my father’s surname. So, I chose to keep both. And just to be a part of our family, Anand has also changed his name. But nobody wrote about that! My husband or his family has not asked me to do anything. Likewise, he did it on his own. We anyway take our father’s names, so if we can give that respect to them, we can give the same respect to our husbands, too. It’s my personal choice and somebody judging me for it is ridiculous.” (Don't Miss: Unseen Pictures From Nita Ambani's Wedding To Mukesh Ambani Proves That She Is A Timeless Beauty) 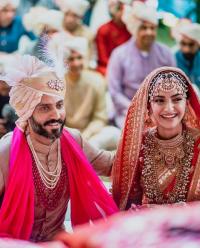 In another interview, Sonam had shared the details of her Anand’s name change. She said, “Anand and I had a very long conversation you know, and we obviously want to have kids eventually, and he had this one friend who had a very long name, his mother’s name, father’s name, blah blah blah. I said, see anyways it’s a patriarchal concept, I have my father’s last name, I don’t have my mother’s name, and I want to be part of your family as well, and he wanted to be a part of mine”.

Such a lovely and madly-in-love duo, right guys? What do you have to say about such sweet gesture of Anand towards Sonam? Keep us posted! If there is one actress on whom we can place our bets when it comes to fashion, it has to be, undeniably, Sonam Kapoor Ahuja. The Neerja actress was recently in Delhi for endorsing a jewellery brand, and as she is walked on the ramp, people couldn't keep their eyes off