On April 23, 2018, ace tennis player, Sania Mirza and her cricketer husband, Shoaib Malik had announced of Sania's first pregnancy. 6 months later, the doting couple became parents on October 30, 2018, when their baby boy was born. They lovingly named their little cotton ball, Izhaan Mirza Malik. Sania Mirza is riding high on life these days owing to her motherhood phase, and the one person, apart from Izhaan and Shoaib, who makes Sania's life heaven, is her baby sister, Anam Mirza. (You May Like: Somya Seth Suggests Of Criminal Background Of Husband, Arun Kapoor Through A Cryptic Post)

Do you remember how during Sania's pregnancy when, one night, she was craving for sweets, Anam had sent her a box of sweets like a caring, dutiful and adorable baby sister? Sania herself had taken to her Instagram stories and had shared a boomerang video of the sweets. Atop of it, she had written, “There are cravings and then there are CRAVINGS. Thanks @anammirzaaa.” 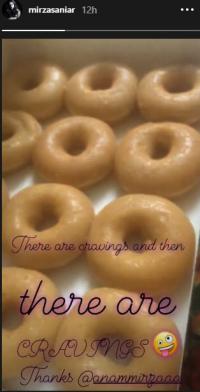 Sania Mirza's baby sister, Anam Mirza became maasi when the cutesy Izhaan Mirza Malik was born last year in October. And seems like the doting maasi is enjoying a lot with Izhaan these days. Anam Mirza has shared an Instagram story in which we can the cotton ball, Izhaan comfortably stationed on his maasi's lap while she is on her phone. Atop it, Anam has written, "Guess who the real boss is?  Izhaan or Of course Izhaan." Looks like there is no choice when it comes to babies being bosses! 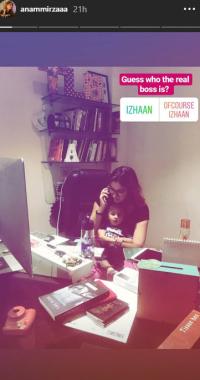 On December 22, 2018, Anam Mirza had shared an adorable picture of Izhaan Mirza Malik. She had expressed the joy of being a maasi by captioning the pic as, "Out of all the things I am, being his khala is my most favorite thing in the world." 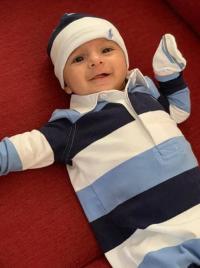 Anam Mirza's equation with her elder sister, Sania Mirza is also adorable beyond words. On Sania's birthday on November 15, 2018, Anam had shared the following childhood picture of the two, and wished her by writing, "From you doing this to me and now me doing this to your baby. Happy Birthday @mirzasaniar. Thank you for being all that you are to me." (Don't Miss: Riddhima Kapoor Shares Uncanny Resemblance With Ranbir Kapoor, Posts A Picture On Siblings Day) Anam Mirza's personal life also has always been under the media radar. Do you know that after her divorce from her first husband, Akbar Rasheed, she is all set to reportedly get married soon again? It was on November 18, 2016, that Anam Mirza got married to Akbar Rasheed at Falaknuma Palace in Hyderabad. But sadly, after two years in 2018, the couple headed for a divorce. A source had earlier shared with Pinkvilla, “The reason for the split is still unknown but we believe the divorce proceedings have come through. Meanwhile, Anam continues to focus on being the stylist for her sister and running her fashion outlet." 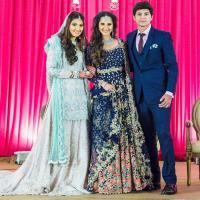 Revealing about how her and Akbar’s proposal moment, Anam Mirza had once shared, “I always had a very movie-like marriage proposal in mind. So, here I was waiting for a filmi proposal from Akbar, while our engagement invitations were already sent out. Of course our families had discussed that we are getting engaged and all, but I was left wondering 'Arey abhi tak Akbar ne mujhe woh movie wala proposal kyun nahin diya!' nd I was definitely not expecting a proposal after the invites were out!” 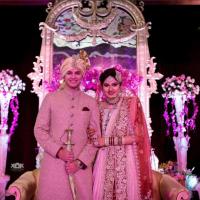 Anam Mirza now is dating former Indian cricket captain, Mohammad Azharuddin’s son, Asad Azharuddin. They are quite active on social media as well. Recently, on Anam Mirza’s birthday on February 24, 2019, Asad had taken to Instagram and posted a beautiful picture along with an adorable birthday wish for her, “Happy birthday to the most amazing person in my life.” No official confirmation has yet been made but reportedly, Anam Mirza is getting married to Asad Azharuddin in 2019 itself! (Suggested Read: Kareena Kapoor Khan, Taimur Ali Khan, Saif Ali Khan Spotted In Gym Together, Set Sheer Family Goals) 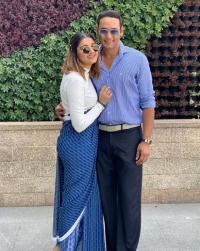 How did you like maasi Anam Mirza's cutesy moment with Izhaan Mirza Malik? Seems like he is the boss, definitely, right?