True love is all about finding the man of your dreams in your best friend. And ace tennis player, Sania Mirza's sister, Anam Mirza has found her 'dressing partner' in her husband, Asad Azharuddin. Once in a lifetime, we meet someone, who changes our entire life! We smile for no reason, we giggle on silly things and we can be our true self when we are with them. They bring a plethora of colours in our life and we grow with them in a beautiful way. That's the beauty of being with the right person as they change us for better. And ace tennis player, Sania Mirza's sister, Anam Mirza has found her soulmate in Asad Azharuddin, who turned her life into a fairytale. (Recommend Read: Nehha Pendse Reveals She Has Met Husband, Shardul's First Wife And Daughters, Recalls First Meeting)

Anam and Asad have been trending on the internet with their unique wedding hashtag 'AbBasAnamHi'. It was on December 11, 2019, when Anam had said 'Qubool Hai' to the man of her dreams, Asad in a nikah. She had looked gorgeous in a Hyderabadi khada dupatta ensemble. On the other hand, her husband, Asad had picked a beige sherwani with a matching golden turban. The duo had radiated couple goals with their pre and post-wedding festivities.

On January 9, 2020, Anam took to her Instagram handle and posted a mushy picture with her husband, Asad. In the caption, Anam shared how much the two love 'dressing up' and wrote, "Finally found someone who is as fond of dressing up as me  #DressingUpCouple". In the picture, we can see Anam donning a gorgeous lehenga with a full sleeves crop top. On the other hand, Asad looked handsome in a white sherwani. Take a look at it below: 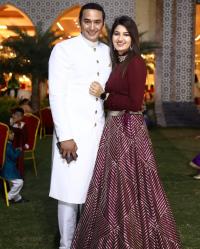 For those who don't know, Anam is a fashion stylist and a curator. She is the mind and heart behind her sister's gorgeous public looks and owns her own label. And maybe that's the reason why Anam's every wedding look became a rage among brides. After her wedding, she had shared a Cindrella moment on her Instagram handle. She had posted a picture, wherein we could see her donning a whimsical powder-blue floral dress. She had accessorised her look with a neckpiece and a pair of earring, but it was her sneakers that had accentuated her outfit. She had captioned it as "And my modern Cinderella moment in @krsnacouture. #AbBasAnamHi". (Also Read: Kangana Ranaut's Brother Aksht And His Fiancee, Ritu All Set To Tie The Knot On This Date) 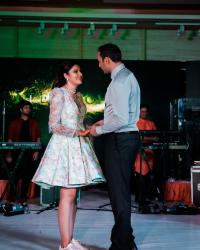 On December 27, 2019, Anam had shared her wedding video which was shot by Daemi Films. The video gave us glimpses of Anam and Asad's fairytale wedding. But what took our heart away was her family's words that they spoke for the newly-married couple. Anam's sister, Sania had shared that she had seen her sister's 'falling in love phase' to her turning into a 'bride phase'. Alongside the video, Anam had written, "Once, in a while, life gives you a fairytale. Here is ours. #alhamdulillahforeverything. My wedding video had to be done by my favourite, @daaemi @asad_ab18." Take a look at it below:

For the unversed, Anam was earlier married to Akbar Rasheed and had tied the knot on November 18, 2016, in Hyderabad. However, the two had parted ways after one-and-a-half years of marital bliss. As per a report in Pinkvilla, a source close to the Mirza family was quoted as saying, "The reason for the split is still unknown but we believe the divorce proceedings have come through. Meanwhile, Anam continues to focus on being the stylist for her sister and running her fashion outlet." (Don't Miss: Ishaan Khatter Reveals His Rumoured Girlfriend, Janhvi Kapoor's One Request That He Had Fulfilled)

Well, we totally love Anam and Asad's cute picture! What about you?