Amitabh Bachchan Has The Most Special Tribute For Mother's Day, Sings An Emotional Song [VIDEO]

Amitabh Bachchan Has The Most Special Tribute For Mother's Day, Sings An Emotional Song [VIDEO]

The relationship between a mother and a son knows no bounds. Such was the bond between Amitabh Bachchan and his late mother, Teji Bachchan. Checkout his Mother's Day gift for all mothers! 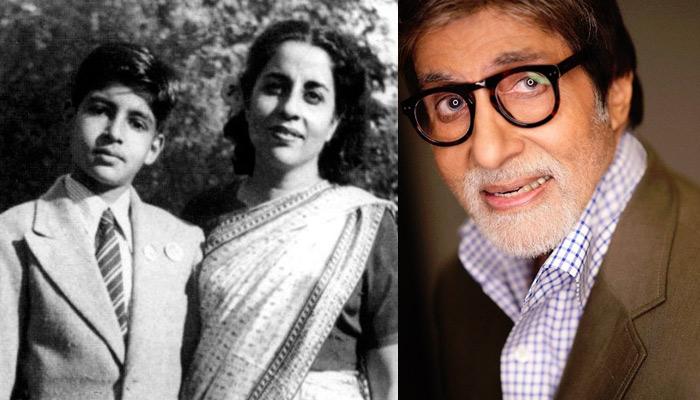 ‘Tu Kitni Achhi Hai, Tu Kitni Bholi Hai, Pyaari Pyaari Hai, O Maa O Maa, O Maa, O Maa’ – this is one of the most special songs for all the mothers and their children and there is no second thought about that. Moms are special and the emotional connect that every child has with his/her mother is something unexplainable. No matter how old one gets, every child is going to be that little kid for their maa, courtesy the way she always takes care of little things like khana khaya ke nahin, office pahunch ke call karna and what not! Such was the relationship between the superstar, Amitabh Bachchan and his late mother, Teji Bachchan ji.

Yet again, Amitabh ji proved his love for all the mothers, and he gets all the accolades for his sweetest gesture on Mother’s Day 2019. Well, the legendary actor has sung a song named, Maa, along with Master Yajat Garg and offered a tribute to all the mothers out there. The beautiful song is written by Puneet Sharma and is composed by Anuj Garg. (You May Also Like: Bruna Abdullah Of 'I Hate Love Storys' Is 5 Months Pregnant With Fiance Al, Flaunts Her Baby Bump)

Amitabh ji himself has shared this good news with his fans on his official Twitter handle. Sharing the below video, he captioned the post as, “Tomorrow on Mother's Day a small tribute under Shoojit Sircar's creation, Anuj Garg's music, his son's voice, lyrics by Puneet Sharma and my voice!” Checkout the music video here:

Last year on August 12, 2018, which happened to be Teji Bachchan ji's birth anniversary, he had penned a heart touching note on his blog that could be read as, “Its Mother’s birth Anniversary August 12 when you failed, she consoled and gave hope. When you succeeded, she wept till her last days she insisted on knowing whether I had eaten and when going out, to advise, not to be late. I had grandchildren by then but that is Mother !!” (Checkout: Chhavi Mittal's Husband, Mohit Hussein's Post Suggests Wife, Chhavi's Labour Has Started)

He had further written, “That ‘piping hot’ cup of tea first thing in the morning - her words her elegance in presence and form as she would walk past the College corridors where she taught for a while, in Lahore, the students would wait for her, to see what she would be wearing and .. to follow her perfume. She loved to drive, and never wasted the first opportunity to pull everyone into a car and take them out for a coffee, or eats at her favourite eatery, or to just see the Republic Day lights at Rashtrapati Bhavan, laughter and song and happiness surrounded her ever, but touch her cubs and the lioness in her would tear into you.”

He had further written, "Even when she was wheelchair-borne, that evening drive to her snack and coffee joint was a permanent feature. The owners still remember her each day. Not just in the city of Mumbai, but in those locations in Delhi. They come over to meet me often and talk gloriously of their time spent with her. She sacrificed her all to give my Father his space and time and bearing. Knowing how valuable it would be for a poet a thinker and philosopher to be so. She introduced me to theatre, films and music and to ballroom dancing took me to the floor at Gaylords, that popular restaurant in Connaught Place Delhi, one evening." (Also Read: Unseen Picture From Isha Ambani And Anand Piramal's Engagement In Italy, Arm-In-Arm Dancing Together)

He concluded with, “Her fashion and aesthetics were beyond comparing. And her love for the red rose, was a must at every home she built. Her rose garden and her garden would win her all the awards at the Annual Flower Show, at Alfred Park in Allahabad. We stood by in admiration and love. Finding my brother and me on the victory podium in the 1st topmost stand at the School Athletics Meet, she would pull out that box camera takes photographs and decorate her bedroom with all the winning cups I won. Where those cups and pictures have disappeared, no one knows. She was a giver all her belongings she would part with to friends, to staff, to anyone she was fond of. I have just her memories with me nothing material, but for me that is more than any else.” (Don't Miss: Arunoday Singh Announces His Separation With Wife, Lee Elton After One-And-A-Half Year Of Marriage)

Long back, on August 12, 2015, Amitabh Bachchan had remembered his mother Teji ji on her 101st birth anniversary. On his blog, he had penned a long note that could be read as, “For long, in my early years I addressed her as Amma ji, then it became Amma, then Maa And now Maa ji, if I need to have reference to her in conversation. But honestly, I loved Amma ji… There was a bit of the ground the earth where I was born, Allahabad, in that address. In various different regions of the world. Ma’ is the very first utterance from the child mouth. The sound that we all that have had the experience of children know.”

What a lovely tribute, Amitabh sir! We truly love this music video, what about you guys? Do keep us posted!