Amitabh Bachchan's Grandson, Agastya Nanda is in the news for he might make his Bollywood debut pretty soon. Scroll down for further details!

The Bollywood industry shall always be indebted to the Bachchan's for their contribution, which has given them their legendary status. It seems the day is not far when the third generation of the Bcahcahn's would grace the industry. Yes, you heard it right. After Shweta Bachchan Nanda's daughter, Navya Naveli Nanda's clear stance on venturing in some field after her graduation, it's her brother, Agastya Nanda who's in the news for he might make his Bollywood debut soon. Scroll down for further details! (Recommended Read: Sayantani Ghosh Of 'Naagin' Fame Celebrates Love Anniversary With Beau, Anugrah Tiwari)

Amitabh Bachchan is a doting grandfather who keeps sharing his happy moments with his grandkids on his social media handles. At the onset the new year, on January 1, 2020, Amit ji had taken to his twitter handle and had posted a picture with his grandchildren, Navya, Agastya and Aaradhya to wish his fans on New Year 2020. In the picture, Navya had looked beautiful in a beige coloured salwar suit whereas, Aaradhya had flaunted her red dupatta over her white coloured kurta. On the other hand, Jaya ji had looked pretty in a yellow coloured suit and Agastya had twinned with his dada ji in the shades of beige. According to reports by the Mumbai Mirror, Amitabh Bachchan's grandson, Agastya Nanda is all set to carry on the legacy of his grandfather, Amitabh Bachchan and his mamu, Abhishek Bachchan in the Bollywood film industry. The star kid has a massive fan-following on his social media owing to his strikingly good looks has got some movie offers, and he is thinking over them. Agastya is spending the quarantine in Mumbai with his family and was even spotted in Neetu Kapoor's birthday bash. Well, we're duly excited for Agastya's debut in Bollywood! Not to forget that Agastya's mother, Shweta Bachchan Nanda, had made it quite clear that she doesn't want her kids to join the film industry. She had talked about her reservations and doubts about the same when she had appeared in the last season of Koffee With Karan along with her brother, Abhishek Bachchan. It would be interesting to know Shweta Bachchan's take on these reports! 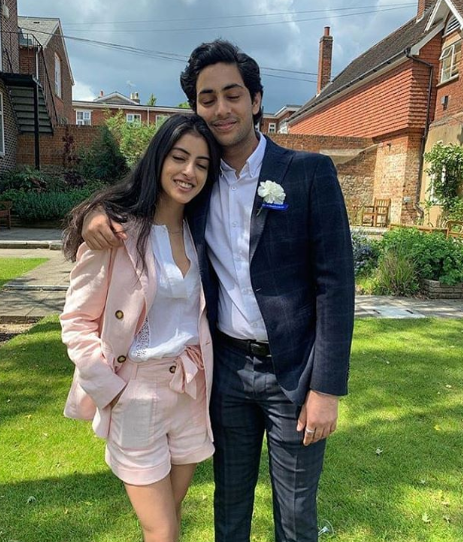 A hilarious incident had happened some time ago, which had taken the internet by a storm. When fans had misunderstood Agastya Nanda for famous YouTuber Carry Minati. On May 21, 2020, Amitabh Bachchan had taken to his Instagram handle and had posted a monochrome picture from his workout session with grandson, Agastya Nanda. In the picture, we could see the veteran actor looking dapper in his rampage look wearing a beanie, gloves, and sleeveless t-shirt paired with trousers. On the other side, Agastya was posing with all smiles for the camera and had looked quite fit. Along with this pumped-up picture, Amitabh Bachchan had written a few inspiring lines that can be read as "Fight.. fight the fit.. fit the fight.. reflective mirrors, laterally inverted imagery.. and the inspiration with Grandson." 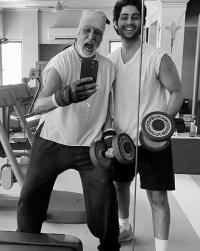 Now, what happened was, tons of fans had mistaken Agastya Nanda as the popular YouTuber, Carry Minati. They hadn't stopped there and had started asking the same question from Big B. Well, one lucky fan had received a reply from the legendary actor and had left everyone in splits on the internet as he had written "Baaju mein mera pota, mera grandson khada hai. Ye carry kya hota hai. (Besides me is my grandson, what is this carry)." After which, a series of comments could be seen with laughing emoticons, while some had praised his innocent and witty reply. (Also Read: Bipasha Basu Makes 'Sattu Ke Laddoo' For Hubby, Karan Singh Grover As She Switch On Her Chef Mode) 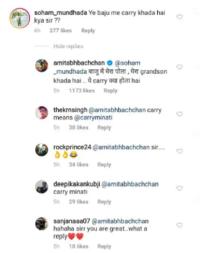 We had seen a glimpse of the three generations of the Bachchan's in one frame on June 27, 2020, when Amitabh ji had taken to his Instagram handle and had posted a rare picture. In the picture, we could see Amitabh ji with his son, Abhishek and his daughter, Shweta Bachchan Nanda's son, Agastya Nanda. The handsome men of the Bachchan family could be seen striking a similar 'crossed-hand' pose for the camera. The legendary actor had captioned it as "Father .. Son .. Grandson .. some years ago .. the folded hands are unplanned .. just happened." (You May Also Like: Sumeet Vyas Shares A Glimpse Of How New Mommy, Ekta Kaul Entertains Their Baby, Ved)

Are you excited for Agastya Nanda's debut in Bollywood?