Amit Tandon And Wife, Ruby Living Together Again As Family After She Gets Relieved From Dubai Jail

Amit Tandon And Wife, Ruby Living Together Again As Family After She Gets Relieved From Dubai Jail

After coming back from serving her 10-month jail term in Dubai in January, looks like Amit Tandon and wife Ruby, are heading towards reconciliation and are once again living together as a family! 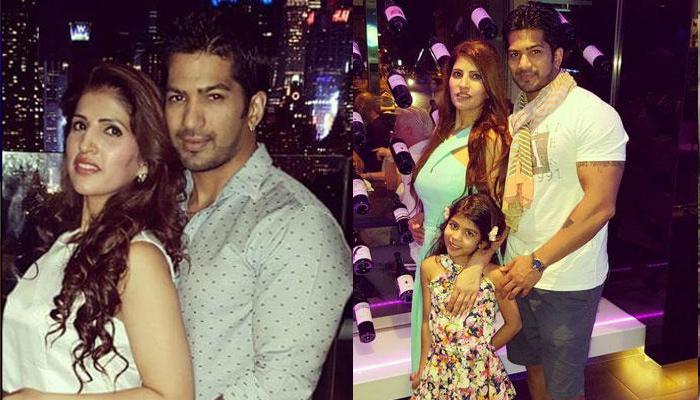 When you decide on forever with the man of your dreams, there are a zillion things which run on our minds. ‘How will we handle responsibilities? How will our in-laws treat us? Will he/she love me the way its always been? What if we fall apart? What about the future?’- are a few questions which run across a couple’s mind when they are all set to enter the bond of holy matrimony. But what happens when a few years thereafter, relationships take a U-turn? This is exactly what happened with Indian Idol 1’s top contestant, Amit Tandon and his dermatologist wife, Ruby. (Do Read: 'Meri Aashqui Tumse Hi' Fame Anmol Pranami Gets Married To His Long-Time Girlfriend, Pics Inside)

Post being happily married for over 8 years, Amit Tandon and his wife, Ruby’s lovelife had hit rock bottom in 2017. After remaining mum about the same for quite a while, Amit had then opened up about his separation with TellyChakkar where he was quoted as saying, “Yes, it’s true. Ruby and I have parted ways. We have already filed for divorce and the final verdict will be delivered in the month of October. We got a joint custody of our daughter. Half a month she stays with Ruby and half a month with me.”

Amit Tandon and Ruby had started to stay separately until a storm befell them. Way back in 2017, Ruby was held at the Al Raffa jail after Dubai Health Authority filed a complaint against her for threatening some government officials in 2017. After coming back from serving her 10-month jail term in Dubai in January, looks like Amit and Ruby are heading towards reconciliation and are once again living together as a family! In an interview with Mumbai Mirror, Amit spoke about the trying times that the family had faced when Ruby was in jail and how their daughter used to cry every night thinking about her mother.

Amit Tandon had shared, “The difficult time helped put things into perspective. There were a lot of upheavals in my life and it was difficult to explain to my daughter, Jiyana, who is seven, what was happening. In a way, I felt guilty for the situation she had to face. I still remember her crying through the night when Ruby was away. We suffered serious financial losses, but all this has only made us stronger. The legal system in Dubai is not easy to work around. We got a court hearing after over 10 months.” (Also Read: Has Vahbiz Dorabjee Asked For Rs 2 Crore Alimony From Vivian Dsena? Says 20% Is Every Wife's Right)

Amit Tandon had further added, “There were news items with certain people claiming that they were looking after my daughter at the time, which isn’t true. In fact, those who I thought were our backbone, our family, turned their backs on us. To me, they are the snakes. Fortunately, we received support from unexpected places.” Joining the incomplete places of the jigsaw puzzle is what the family is doing these days, “Ruby is slowly getting back to work. She has unbelievable strength, I would have gone mad if I was in her place. Our relationship is still work in progress, but we are friends again, at least we know we can depend on each other. We are living together as a family and I’m glad I get to see my daughter every day.”

Earlier, Amit Tandon had spoken about his wife, Ruby being put in jail. The Kasam Tere Pyaar Ki actor had shared, “I am very saddened by the developments that such a hardworking and caring woman who did her best to treat the rich, poor, and disabled to the best of her abilities and genuinely make a positive change has been put through this. Some very influential people or competitors who could not stand to see her succeed, as Dr. Ruby had begun treatments on not only Bollywood but even Hollywood celebrities, levied false accusations against her due to which the poor girl has been held in remand for almost a month. I always want to believe in the due process of law, but sadly this time Ruby is at the receiving end of it.  We still hold faith that the judicial authorities will realize that she is 100 per cent innocent and let her come back to her work and most importantly to her daughter who misses her every day."

Revealing about how Ruby and Amit Tandon are trying to make things work yet again, a source close to the couple had shared with SpotboyE, "Ruby is a changed person. In jail, she realised that what Amit did for her, nobody came even close to doing that. Amit made frequent trips to Dubai and left no stone unturned in making efforts that Ruby should be let out as soon as possible.”

The source had further added, “Ruby and Amit both have developed a respect for each other, which may translate into a patch-up. It is not sure though if both would indeed get into starting their relationship all over again, but it certainly cannot be ruled out at this point of time. Moreover, Ruby also realised that she had got a bit carried away in the world of television and movies. This ordeal also made her eyes open to who are her true friends and who are not. She was shocked to see that many she considered close, were quite fake." (Must Read: Soni Razdan Gives It Back To Kangana Ranaut's Sister, Rangoli For Demeaning Daughter, Alia Bhatt)

But looks like all’s well that ends well! We hope that the Tandon family becomes inseparable, never to be broken again!