The popular South superstar, Allu Arjun was first seen on the big screen in his debut film, Gangotri (2003) and since then, there has been no looking back for the actor. The actor has experienced a lot of success in recent years and has always credited his wife and children for the same. Allu Arjun had gotten married to his long-term girlfriend, Sneha Reddy on March 6, 2011, and the couple was blessed with a baby boy, Allu Ayaan on April 3, 2014. (Recommended Read: Aishwarya Rai And Abhishek Bachchan Remember Her Late Father Krishnaraj Rai On His Birth Anniversary)

After two years, on November 21, 2016, the couple had embraced parenthood for the second time and had welcomed a baby girl, whom they had named, Allu Arha. Now, on her 4th birthday, the doting parents have shared the cutest birthday wishes for their princess on their respective IG handles. Scroll down to see it! On November 21, 2020, South Indian superstar, Allu Arjun took to his Instagram handle and shared an adorable wish for his little princess, Arha on her 4th birthday. In the picture, the doting daddy can be seen giving two big boxes from the largest toy shop in the world, Hamleys to his birthday girl. Along with the cutesy picture, Allu Arjun penned down a beautiful note in the caption, and it can be read as "Many many happy returns of the day to my Arha. Thank you for the infinite cuteness and joy that you give me. Wishing you a wonderful birthday my little angel. #alluarha." The doting mother, Sneha Reddy, also shared a picture of Allu Arjun with their baby girl on her IG stories and put a 'Birthday Girl' crown emoticon atop it. The same picture is shared by Allu as a post on her IG and the dearest daddy captioned it with a sweet one-liner that reads, "Small Surprise in the morning for the bday baby". Take a look: 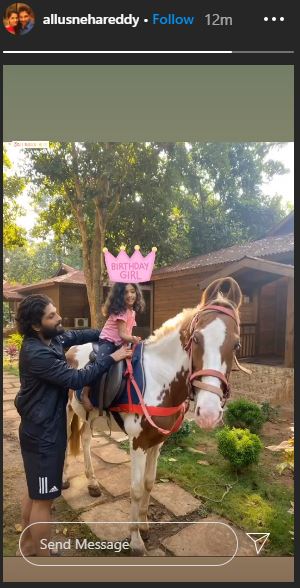 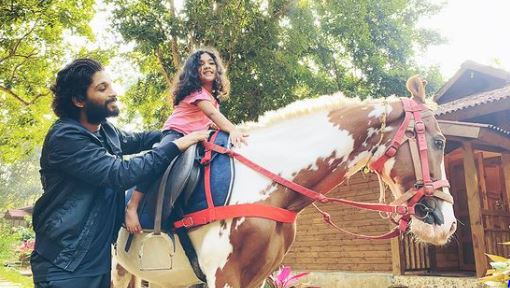 Last year, on November 21, 2019, when Arha had turned 3, the doting parents had shared a similar picture of their daughter on their respective Instagram handles. In the picture, Arha could be seen sitting on the floor in front of her cake as she had struck a perfect smiling pose for the camera. In the background, we could see an artificial wall decorated with balloons, cutouts of doughnuts, candies, and many other favourite things of the birthday girl. Along with the photo, while Allu Arjun had written a sweet and short wish in the caption that could be read as "Happy Birthday to my cutest angel Arha baby #alluarha #happy3", the gorgeous mommy had written, "#happybirthday Arha #ourhappiness #3" in the caption. (Don't Miss: Mahhi Vij And Jay Bhanushali Share Their Daughter, Tara Bhanushali's Post 'Mundan' Look [VIDEO]) 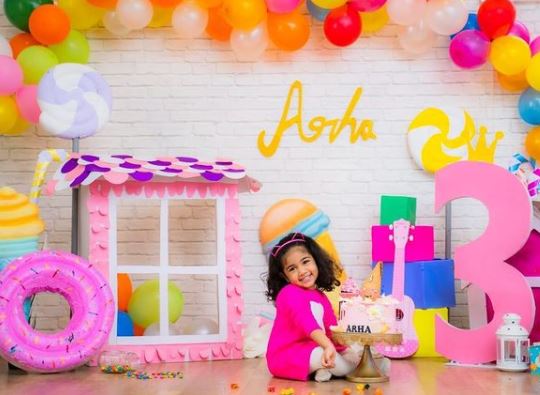 On July 31, 2020, Allu Arjun's wife, Sneha Reddy had taken to her Instagram handle and had posted a mesmerisingly beautiful photo of their daughter, Arha in her stunning outfit for the auspicious festival of Varalakshami Vratam. In the photo, the then 3-year-old princess had looked nothing less than an angel in her traditional wear in the hues of red and orange. The little Arha also had a little bit of makeup on with eyeliner, a red bindi, shiny pink lipstick, and curly hair, which were tied into a half ponytail. Along with the picture, Sneha Reddy had written a caption in which she had called Arha, their family's 'Varalakshami', and it could be read as "Our #varalakshmi" followed by a kiss and a red-heart emoticon. Take a look. (Also Read: Kapil Sharma Takes A Dig At Aditya Narayan For Announcing His Wedding After 'Crush' Neha Kakkar) 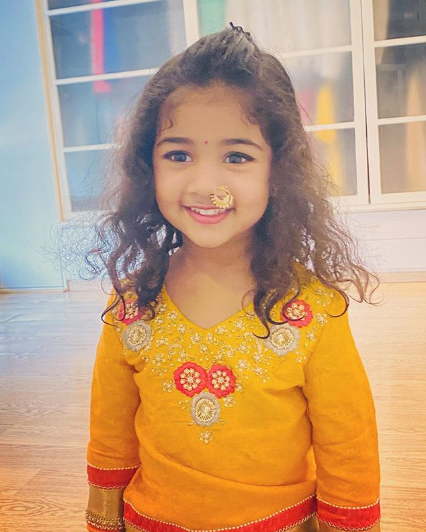