Alia Bhatt and Ranbir Kapoor’s 2020 wedding rumours are all over the news and internet and the actress shed light on her April 2019 roka rumours. 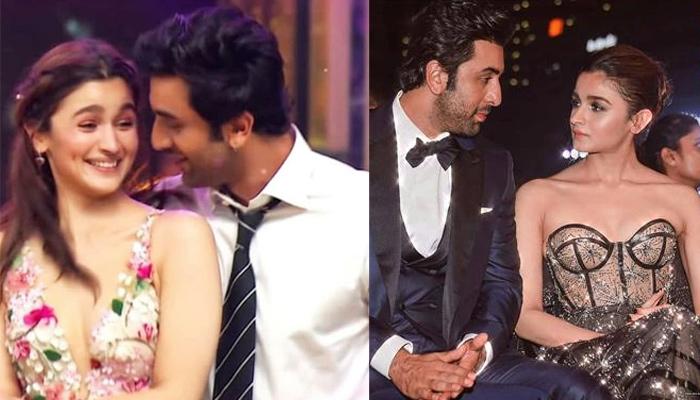 She is an epitome of talent and grace and is a much-needed breathe of freshness that the tinsel town had yearned for the longest of time. Alia Bhatt, one of the reigning queens of Bollywood has converted dream of becoming an actress to actually becoming one, like how! Admit it or not, the moment we hear that there is an Alia Bhatt release happening, a ‘naam hi kaafi hain’ attitude governs us and we simply end up buying the tickets for we know that there would be nothing but praises for this 26-year-old, the moment we come out of the movie theatre! (Do Read: Sonam Kapoor On Father Anil Kapoor, Says I Was Always Given The Independence To Take My Decisions)

Apart from Alia Bhatt’s professional high, the actress is largely in the news for her relationship with Kapoor khaandaan ka chirag, Ranbir Kapoor. She’s had her series of ups and downs in relationship and he has had his share too, but looks like puri kaynaat had tried to bring together these two souls, who are now seen comfortably expressing their love for each other in public, holding hands and giving pecks to each other. And every time we see a glimpse of this duo together, our heart yells a big ‘awww’! 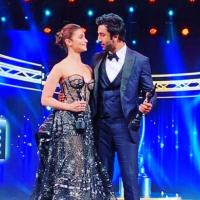 Alia Bhatt is the April cover girl for Filmfare, along with her best buddy and co-star, Varun Dhawan. In a candid chat with the magazine, we got to know about what’s happening inside the Kalank actress’s heart (read Ranbir Kapoor!). Alia Bhatt and Ranbir Kapoor’s 2020 wedding rumours are all over the news and internet! In the similar lines, Alia was asked about her rumoured April roka with beau, Ranbir. To which, she replied, “The only ‘Roka’ I’m going to is the restaurant in London. There’s no roka happening for me. And why are you putting a year to my marriage?” 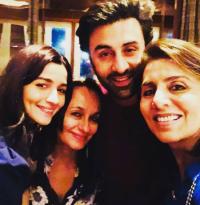 Alia Bhatt also revealed her thoughts about tackling a person as ‘difficult’ as Ranbir Kapoor. She shared, “He’s not difficult. He’s a gem.” She further added, “When I met him for the first time in my life. Again, let me tell you he’s not difficult. He’s a supremely simple person. He’s such a nice human being that I wish I was as good as him. As an actor, as a person, as everything. He’s way better a person thanI am. And about getting married? Well, that’s the only thing that’s irritating right now. Every morning I wake up to the news that I’m  getting married. I tell him what the hell. I guess he’s used to it.” (Must Read: Janhvi Kapoor Reveals One Thing She Fights About With Khushi Kapoor, Every Sister Can Relate With It)

26-year-old Alia Bhatt has already shared screen space with the who’s who of the tinsel town. Having worked with beau, Ranbir Kapoor and his ex, Deepika Padukone’s now present, Ranveer Singh, Alia drew a beautiful comparison about working with the both of them and shared, “They’re both different as actors. When Ranveer is excited, it’s visible. When his preparation is on, you’re aware of his focus, his energy… You can see he’s getting into his shot. But with Ranbir, I wouldn’t know what he’s thinking. He could be thinking of butter chicken yet he’d be giving a shot. That’s the way he is. I don’t know about technique. But his process is more visible. I don’t think Ranbir has a process. He’s just gifted, he just comes and does. There’s no thought. But both are ‘chill’ on the set." 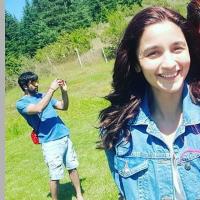 Alia Bhatt was also asked about being a ‘female Ranbir Kapoor’ as she seems to have developed an air of detachment around her. To this, the Gully Boy actress replied, “I’ve always been like that. It has nothing to do with Ranbir. People keep saying Ranbir and I are so similar. I don’t think he’s detached. We don’t have or rather I don’t have the ability to pretend. So, if I’m interested, I’m interested. Also by default, my face wears a perpetual frown. I could be feeling ecstatic. But you wouldn’t know that because I’ve got this frown on my face. So, it’s not because of Ranbir. I’ve always been this way. Of late, there’s just so much going on in my mind, it’s not a good thing. I’m not present in the moment. I’m constantly flying somewhere else. Ranbir is not like that. He’s quite the opposite.” 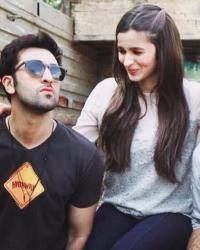 Alia Bhatt also revealed the best advice she had received from her equally superstar beau, Ranbir Kapoor, “I stress about things that are not in my control. I’m an over thinker. I get anxious. There was a period when I was working hard and I was stressed. Ranbir told me if you’re working hard, you need not worry about anything else. Do the best you can and just let everything else be. That helped me. I still stress but it’s easier for me to now let it be. The maximum I can do is put in my 100 per cent. I don’t need to worry about the results.”

Further talking about ‘brilliant friendship’ with Ranbir Kapoor, Alia Bhatt stated, “No. It’s not a relationship. It’s a friendship. I’m saying this with all genuineness and honesty. It’s beautiful. I’m walking on stars and clouds right now. The best part is that we’re two individuals, who are living our own professional lives in its full form right now. He’s shooting continuously. So am I. It’s not a situation where you’ll see us constantly together. That’s the true mark of a comfortable relationship. Nazar na lage. In fact, there’s a beautiful book titled My Brilliant Friend. Ranbir’s my brilliant friend.” (Also Read: Karan Johar Unveils His Wax Statue At Madame Tussauds, Singapore With Mom, Hiroo Johar)

Folks, how many of you want Alia Bhatt and Ranbir Kapoor to get married? Keep us posted!