The summer of 2020 will always be remembered for the immense pain destiny gave us as we lost a profound actor, Rishi Kapoor. Check out as Alia Bhatt bids him goodbye!

'Marne se pehle, main chahta hoon ke mere pariwar ke saath ek family photo ho, jiske neeche title hoga - Kapoor and Sons!, since 1921',! This dialogue from Rishi Kapoor's hit film, Kapoor and Sons, is enough for us to understand why the legendary actor was full of life when he was giving a tough fight to cancer in New York. We all know Rishi ji went through a lot in the past two years, but he never let his pain overpower him. In fact, he kept entertaining his family and celebrating every moment like it is going to be his last. We have seen him pose for many pictures and that is a testament enough that he wanted people to remember him with smile and laughter. (Recommend Read: Neetu Kapoor And Riddhima Kapoor's Emotional Posts For Late Rishi Kapoor Will Leave You Heartbroken)

It is said that some heroes don't die, they remain 'forever', not for just two hours in the recorded footage, but in the hearts and minds of the people, who were lucky enough to experience such a talent. And no doubt, Rishi Kapoor was one of them. His legacy will forever remain in the hearts of every '80s girl, who had known the meaning of 'love' through him. He was born in the renowned family of the Kapoors, who had played an important part in the history of Indian cinema, yet he was successful in making his own mark. He will forever be hailed as an extraordinary actor, who had given a new face to films and had entertained two generations with his acting skills.

April 30 will always be remembered as the saddest date of the year 2020 as we had lost our precious Rishi ji. While we still cannot believe that Rishi ji is no longer with us, the Bollywood industry is also hit hard with the news. Bollywood actress, Alia Bhatt, who attended Rishi Kapoor's antim yatra in the afternoon, took to her Instagram handle and shared a eulogy for the great actor and described her experience of knowing him. Alia shared a note for the great soul and it can be read as "What can I say, about this beautiful man, who brought so much love and goodness into my life."

Alia's note can be further read as "Today, everyone speaks of the legend that is Rishi Kapoor and thought I've known him like that all my life. For the past two years, I have known him as a friend, a fellow Chinese food lover, a total cinema lover, a fighter, a leader, a beautiful storyteller, an extremely passionate tweet and a father! In these past two years, the love I have received from him is like a warm hug that I will always cherish! I thank the universe for giving me this opportunity to know him. Today, probably most of you can say he is like family - because that's how he made you feel! Love you, Rishi uncle! Will miss you forever! Thank you, for being you!"

Alia Bhatt also shared an unseen picture of Rishi Kapoor with his wife, Neetu Kapoor, wherein the two can be seen posing for the camera. Alongside it, she wrote, "Love you", with a heart emoji. (Also Read: After Rishi Kapoor's Demise, Family And Bollywood Celebs Prepare For Last Rites At His Mumbai Home)

Alia Bhatt also shared another unseen picture of Rishi Kapoor with his son, Ranbir Kapoor when he was small. Along with it, she wrote, "Beautiful boys".

During the last rites of Rishi Kapoor, we have seen Alia's heartbreaking picture, wherein she was seen crying inconsolably as she was video calling the actor's daughter, Riddhima Kapoor, who wasn't able to attend his funeral due to the lockdown in the entire nation. In the picture, Alia Bhatt was also seen hugging Neetu Kapoor, who was not able to control her tears. (Don't Miss: When Ranbir Kapoor Had Expressed His Wish To Be Friendlier And Spend Time With Father, Rishi Kapoor)

Well, no right words can describe the pain, we all are going through as we lost a legend! 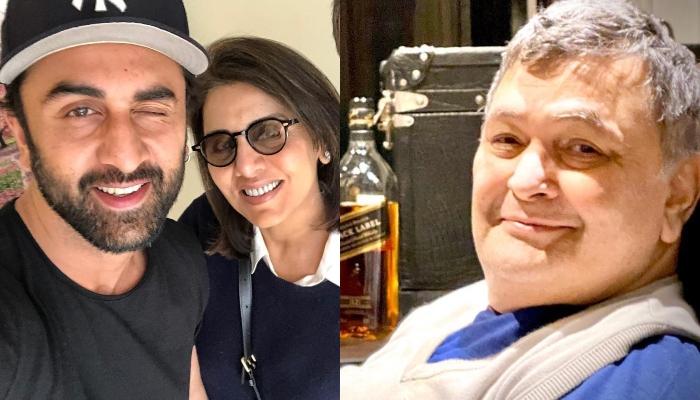 There are dates in our lives that shake us and change us completely as a being. One such date was April 30, 2020, when our favourite star, Rishi Kapoor had left us forever. It came as one of the most shocking news when we had seen it on our television screens. Rishi Kapoor