The much-awaited wedding of Bollywood has finally happened. The much-in-love couple, Ranbir Kapoor and Alia Bhatt had tied the knot in a Punjabi wedding on April 14, 2022. For the unversed, it had all started when Alia had confessed her crush on Ranbir in an episode of Karan Johar's chat show, Koffee With Karan. Later, when they had met on the shooting floors of their first film, Brahmastra in 2017, love had brewed between them and the rest is history.

After the traditional wedding on April 14, 2022, Alia Bhatt had taken to her Instagram handle and had shared a series of pictures with her hubby, Ranbir Kapoor. In the pictures, the duo had twinned in ivory-coloured ensembles and were seen lost in each other. The duo's happiness was clearly visible on their faces. Along with the mesmerising pictures, Alia had written:

"Today, surrounded by our family and friends, at home … in our favourite spot - the balcony we’ve spent the last 5 years of our relationship - we got married. With so much already behind us, we can’t wait to build more memories together … memories that are full of love, laughter, comfortable silences, movie nights, silly fights, wine delights and Chinese bites. Thank you for all the love and light during this very momentous time in our lives. It has made this moment all the more special. Love." 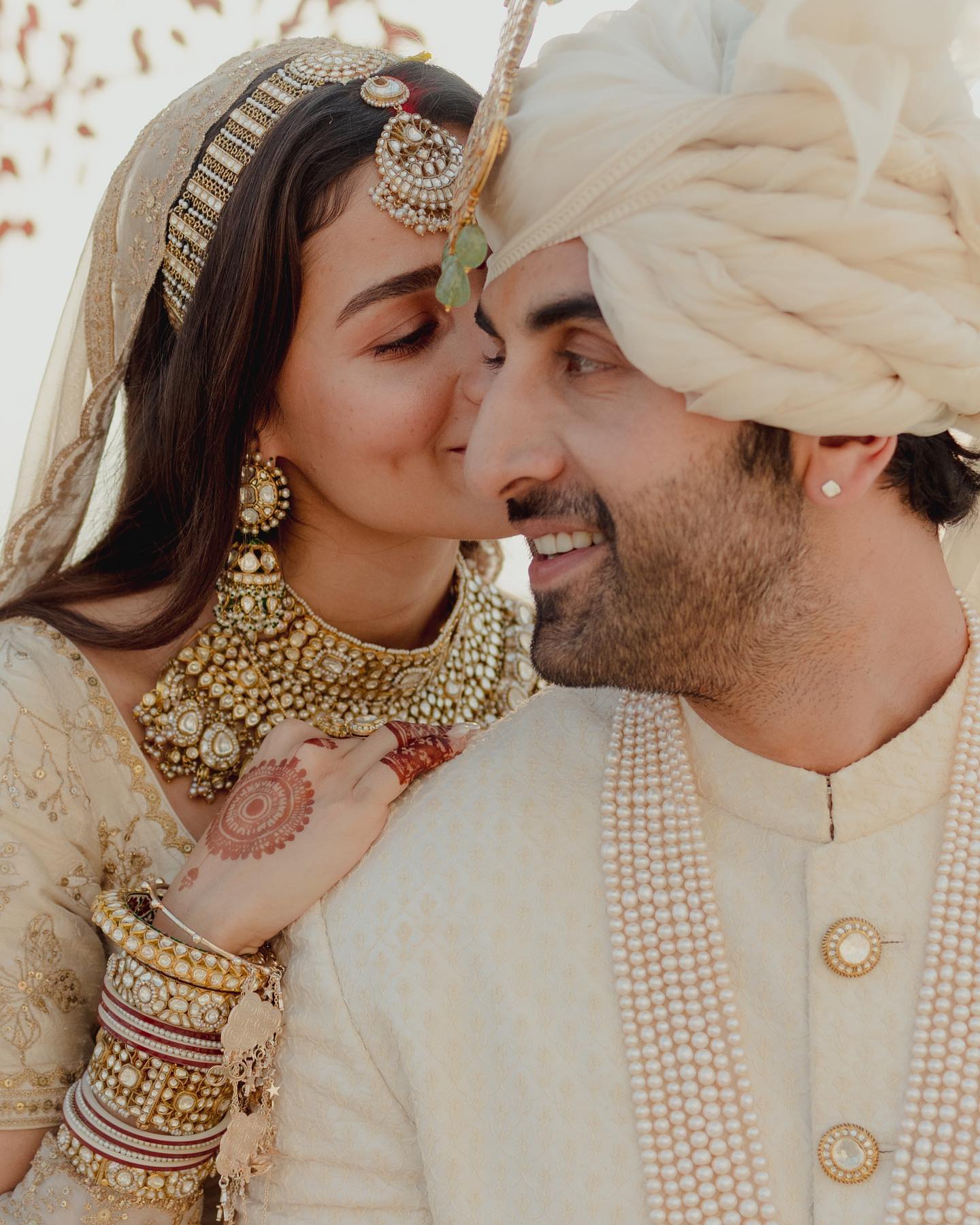 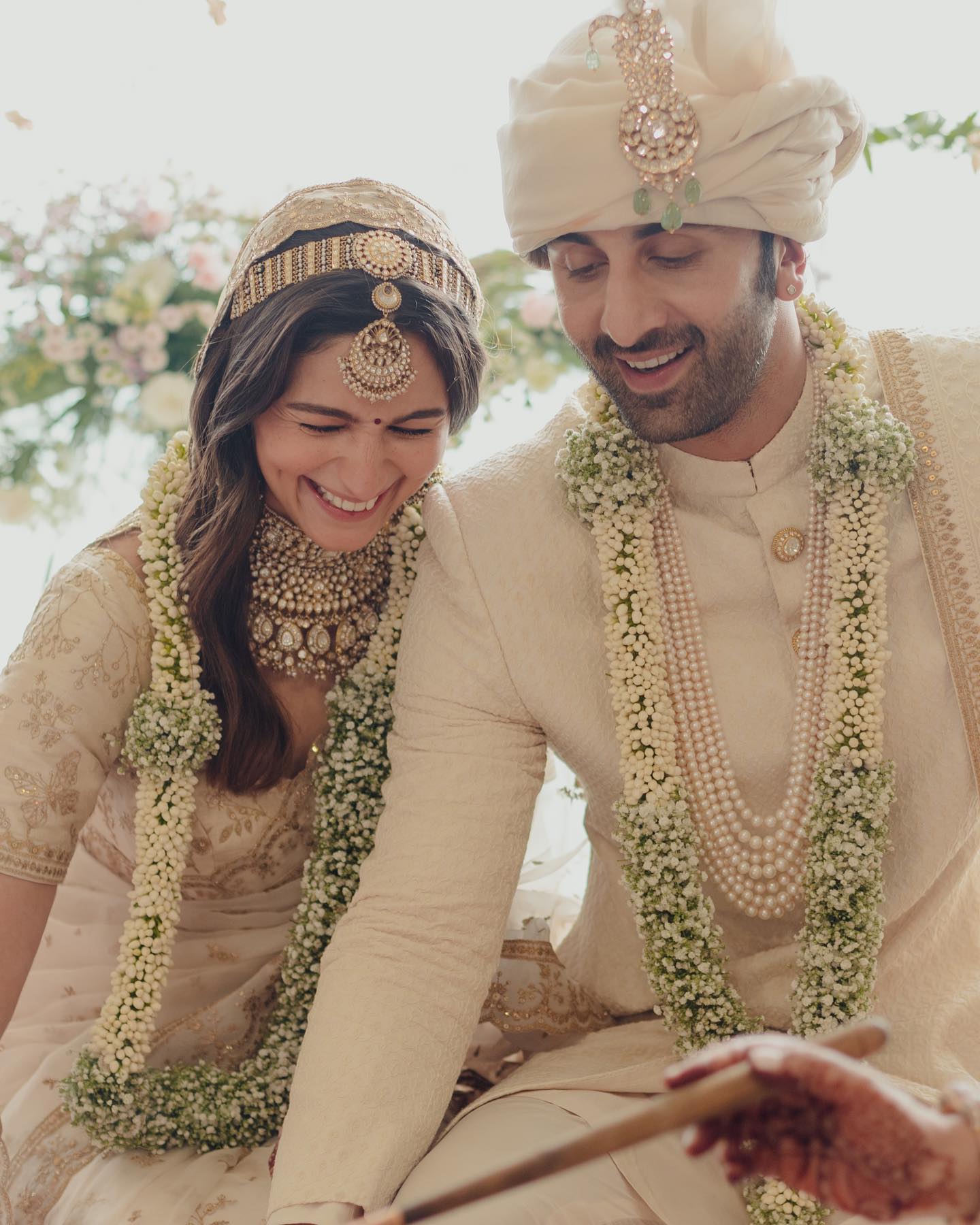 A source close to the just-married couple, Ranbir Kapoor and Alia Bhatt opened up about the expensive wedding gifts given to the groom and the bride, in an interview with the Hindustan Times. The source mentioned that the bride's mother, Soni Razdan had gifted her son-in-law, Ranbir a super-expensive watch which came with a price tag of Rs. 2.5 crores. He also mentioned the Kashmiri shawls as the return gifts for the guests which were picked by Alia herself. The source was quoted as saying:

"Alia's mother gifted her son-in-law with a high-end expensive watch, which is from a brand that’s not easily available. It costs almost Rs. 2.50 crore. And the guests present at the wedding received gifts in the form of Kashmiri shawls, specially picked by the bride. The material of these shawls was incredibly fine and everyone was in awe of it.” 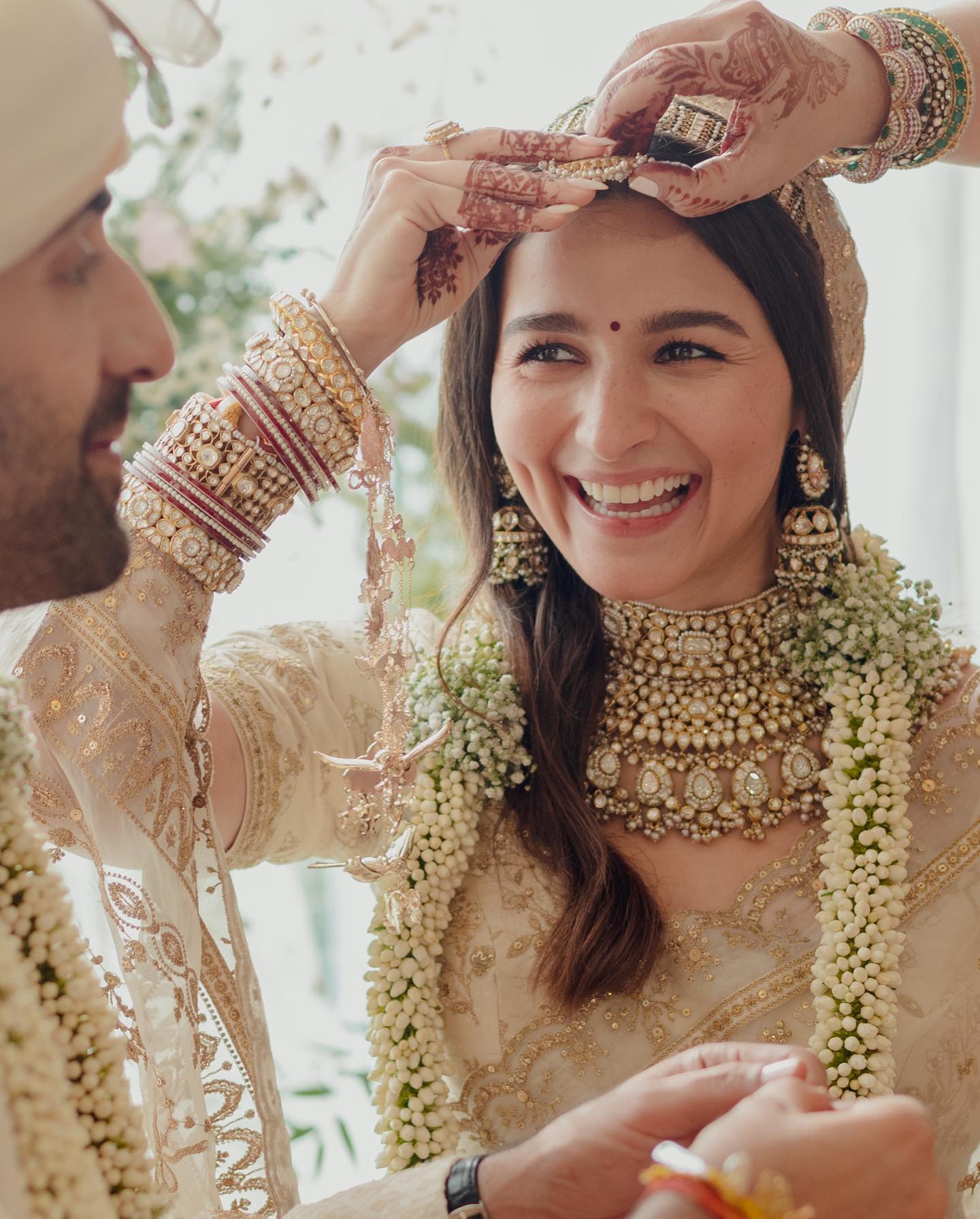 According to the report in the Hindustan Times, Ranbir and Alia had also exchanged rings on April 14, 2022. In the engagement ceremony, Ranbir had got a band ring and Alia had received a beautiful diamond ring. Another source revealed to the portal that during the joota chupai ritual Alia’s girl gang had demanded Rs. 11.5 crores, but they had received only an envelope of Rs. 1 lakh. The source mentioned:

“After much banter, an envelope containing Rs. 1 lakh was given to them.” 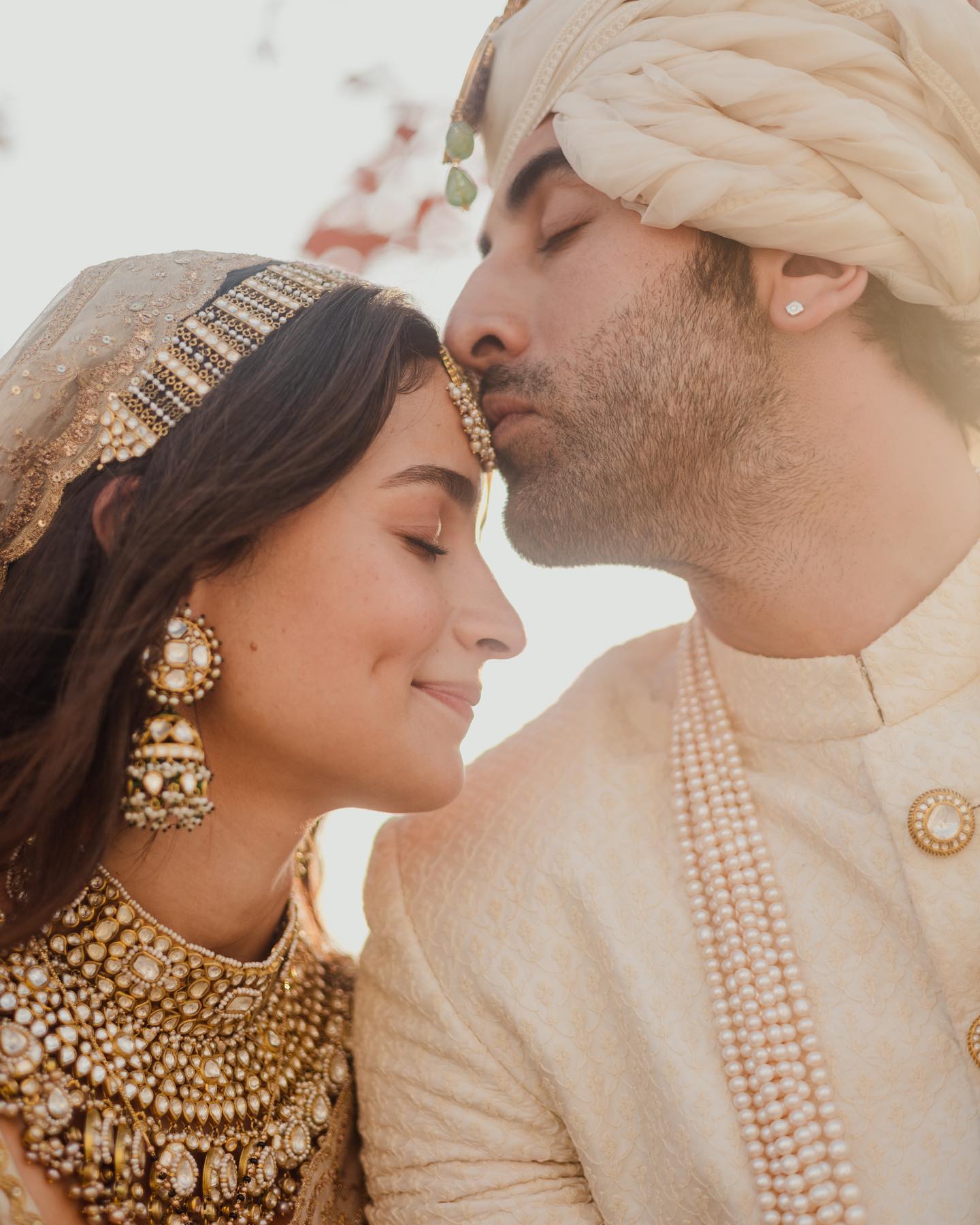 After Ranbir and Alia's wedding, his sister, Riddhima Kapoor Sahni had taken to her IG stories and had shared a few glimpses from their gathbandhan ceremony. In the pictures, we could see Karisma Kapoor tying the knot of the much-in-love couple's gathbandhan and all other Kapoor ladies were seen surrounding the groom and the bride. Neetu Kapoor was also seen guiding Karisma while she was doing the rituall. 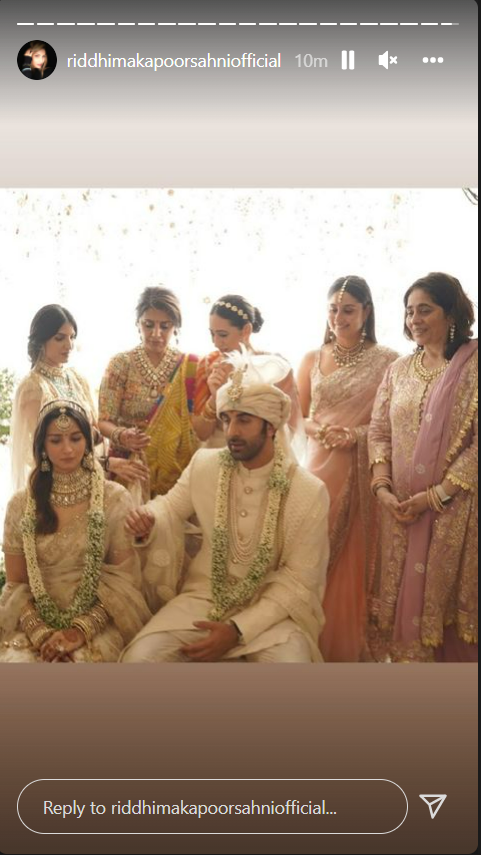 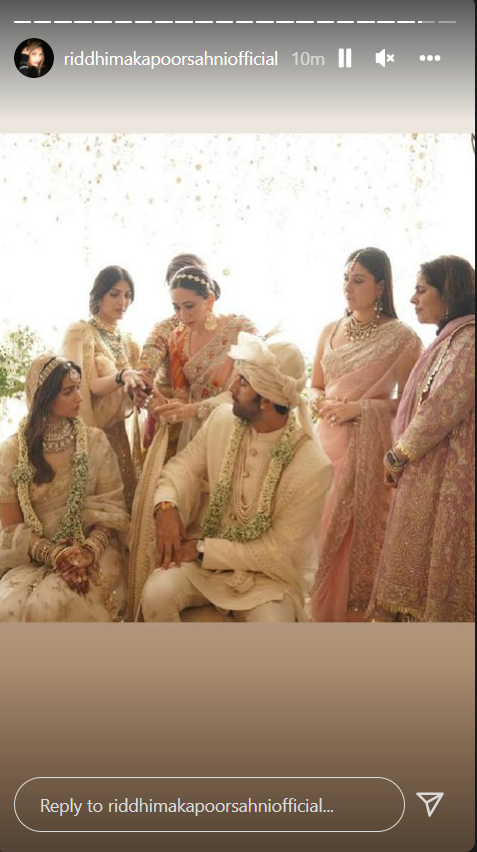 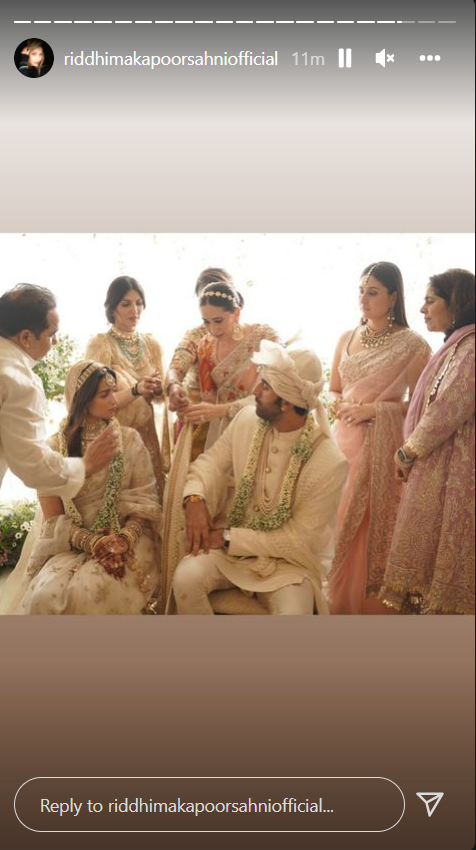 On April 14, 2022, after the wedding rituals were over, Riddhima had taken to her Instagram handle and had shared a picture from her brother, Ranbir and Alia's white wedding. She had darlingly welcomed her sister-in-law to the Kapoor family. Sharing the photo, the doting nanad, Riddhima had penned:

"Couldn'tt have asked for a better addition to our family! @aliaabhatt We love you andcan'tt wait to be a part of this incredible journey you both have embarked on! Welcome to the family my precious girl -But you always were a part of it." 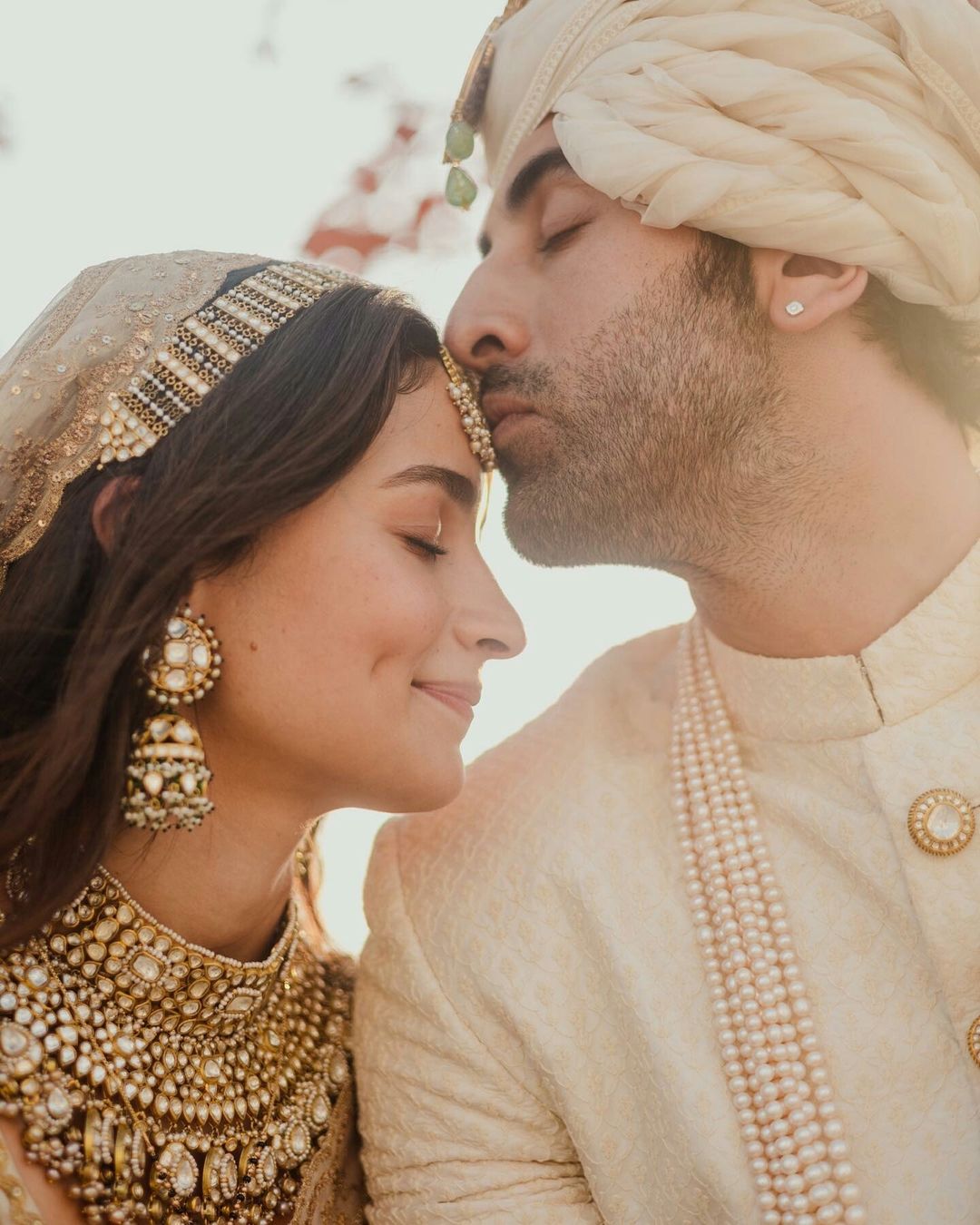 Well, we are in awe of Ranbir Alia's wedding. What about you?

Next Read: Lock Upp: Poonam Pandey Reveals Her Parents Were Kicked Out Of A Society Because Of Her Image