Aarav Bhatia and Twinkle Khanna were spotted at the airport but it was Aarav's mid-parted hair which had caught everyone's attention as he reminded them of Radhe bhaiya from 'Tere Naam'. 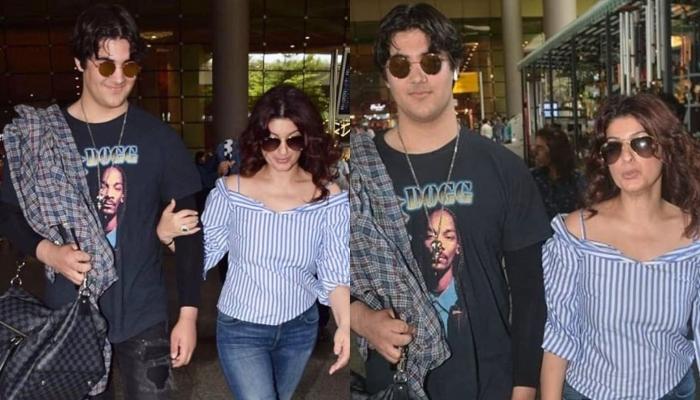 Do you shudder to think of a time when there was no or very little social media? Well, the presence of social media in our lives has its own pros and cons. There were days when if your BFF didn't call you thrice a day, you wouldn't speak to him/her for three days, but in today's time, if he/she doesn't tag you in three memes a day, you would tag her in one which talks about broken friendships! Such is the macro-level reach of social media in today's' times, which makes the world a much smaller place to live! (Do Read: Kajol Breaks Down Into Tears, Hugging Aishwarya Rai At Her Late Father-In-Law, Veeru Devgn's Funeral)

While that was about friendship, let us divert our minds to social media and our favourite celebs! Had it not been for varied social media platforms, we wouldn't have kept a track on how our favourite stars are faring. And with social media, comes trolling, which a variety of celebs are now taking up and talking about it seriously. With many celebs regularly getting trolled (some for their past statements or some for the looks they sport), the latest celeb to join the bandwagon of merciless trolling is none other than Akshay Kumar and Twinkle Khanna's blue-eyed little man, Aarav Bhatia.

Both Akshay Kumar and Twinkle Khanna have always been very protective about their kids, Aarav Bhatia, and Nitara Bhatia. Very recently, Aarav Bhatia and Twinkle Khanna were spotted at the airport, as they smiled, talked and walked together after hugging and bidding adieu to Ibrahim Ali Khan. While they surely get a thumbs-up in their airport look, but it was Aarav's mid-parted hairstyle which had caught everyone's attention as he reminded them of Radhe bhaiya from the super hit film, Tere Naam. And soon enough, an array of trolls filled up the comments section of varied pap's Instagram page. Take a look at some of them below:

While Aarav Bhatia's hairstyle could have definitely been better, he is growing up to be a very good-looking man. In a recent interview with the Hindustan Times, his star daddy, Akshay Kumar was asked about when we would get to see Aarav on the big screen. To which, he answered, "He is just a 16-year-old kid, who is enjoying his life. There’s no need to discuss his career right now and put pressure on him. I feel that [kids feeling pressure] will happen only if the parents – in a way – put some kind of burden. I am very clear that whether my kids want to become a painter, doctor or open a restaurant, I am fine. My dad never put any pressure on me. He was like, ‘if you’re interested in sports and karate; and want to be like Bruce Lee, go for it. But become at least half a Bruce Lee (laughs).’ Aaj wahi cheez kaam aayi na mere." (Must Read: Arjun Rampal Shares How He Met Gabriella, Says His Life In The Past 5 Years Has Been Like Hell)

Akshay Kumar had further added, "See, every parent hopes and tries to ensure that his/her kids’ life becomes easy. They pray for their kids but everything depends on how their kids want to shape and take ahead their lives. No parent can shadow their kids 24/7. They can guide them from far and shield from certain things. So, be it Aarav or Nitara, jo unko karna hoga, woh apne aap karenge. I strongly feel ki be it a king’s son or beggar’s, har insaan apni kismet saath leke aata hai."

In yet another interview, Akshay Kumar had revealed the lessons that he has always taught his son, Aarav Bhatia, "I really want to inculcate the same qualities in Aarav that my father passed on to me. First and foremost, I have taught him to respect his elders. Like me, he is also into sports and outdoor activities. He loves the outdoors just like I do. And he has an amazing sense of humour. That, I feel, is something he has got from his mother (Twinkle Khanna)."

Akshay Kumar had once shared his and wife, Twinkle Khanna's responsibilities as parents. He had stated, "With my son, my job is simple. I let him do whatever he wants. If he feels a particular school is good for him, he checks out its website, fills the form and completes the formalities by himself. My job is to sign as a guardian and just pay the money. It’s as simple as that. Not to forget, my wife, Tina, is also a fabulously responsible parent to both our kids." (Also Read: Katrina Kaif Reveals Real Reason Why Salman Khan Doesn't Want Her To Call Him 'Bhaiya', Check Inside)

Guys, do you have any thoughts about Aarav Bhatia reminding us of Tere Naam's Radhe bhaiya? Keep us posted!