There is no doubt about the fact that Akshay Kumar is a perfect family man. He adores his kids, loves and respects his wife and is always there for them when needed. He has time and again proved that he is the definition of a perfect father, husband, son and brother.

Recommended Read: 7 Simple Ways To Bond With Your Mother-In-Law No Matter How Difficult It May Seem 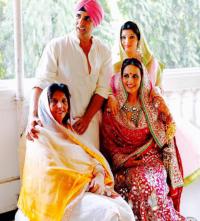 Akshay is married to late actor Rajesh Khanna and veteran actress Dimple Kapadia’s daughter, Twinkle. We have always seen Akshay bond well with his mother-in-law. But, we did not know how deep this damaad-saasu maa bonding was until now.

During a twitter chat with his fans, Akshay revealed something, which will make everyone go ‘awww’. When asked who his best friend in Bollywood was, he replied:

Now that is very adorable, don’t you think? While one would have guessed that he would take his darling wifey’s name, he pleasantly surprised everyone by naming the Bobby star instead. There is a certain fun quotient in the way they behave with each other.

Not many sons-in-law these days share such a warm equation with their in-laws. There is always a little awkwardness between the two parties. But, khiladi Akshay has surely set some really cute #Damaadgoals for every married guy out there.

And if you are wondering how you can make your in-laws fall in love with you, you should definitely check out these simple yet cute ways of impressing them. They work like magic, trust us.

On the professional front, Kumar’s Jolly LLB 2 just released yesterday (March 10, 2017) to some great numbers. We wish Akshay all the best for his future. And of course, loads and loads of praises for being not just a perfect husband and father, but also a great son-in-law.

NEXT READ: 10 Most Famous Sons-In-Law Of Big Bollywood Families