Akshay Kumar went for the shoot of 'The Kapil Sharma Show' for promoting his film, 'Good Newwz' and brought a special gift for his wife, Twinkle Khanna. Scroll down to see what did Akshay gift her. 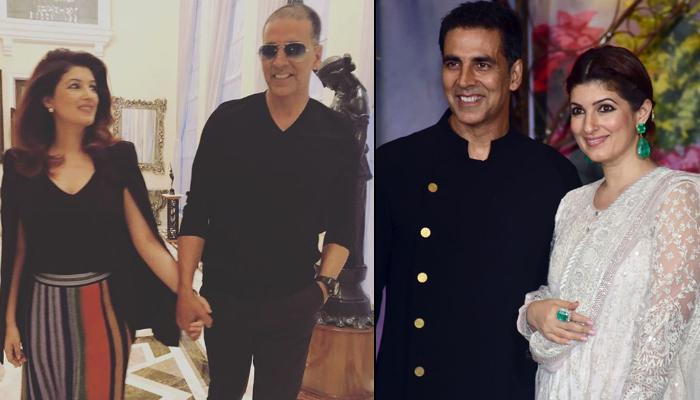 Twinkle Khanna, daughter of Rajesh Khanna and Dimple Kapadia, had made her debut in the Bollywood industry with Barsaat in 1995 to take forward her star family’s legacy. But soon realised that acting isn’t her forte and then started her career as an interior designer. And finally, Twinkle became Mrs. Funnybones and with her subtlety of the humour and the references, she managed to make a place in everyone’s hearts. Twinkle has never shied away from speaking her mind and with every tweet, she makes the headlines. (Also Read: Kim Sharma's Sweetest Wish For Her Ex, Yuvraj Singh On Birthday, Praises His Wife Hazel Keech)

In 2000, Twinkle Khanna and Aamir Khan starrer Mela had released and the former was confident that the film would work. Though it didn’t make a difference at the box office and turned out to be a flop, the film definitely changed the life of Bollywood’s Khiladi, Akshay Kumar. Akshay had asked Twinkle to marry him and she had told him if Mela wouldn’t work, she would marry him. And fortunately for him, the film didn’t work and on January 7, 2001, Akshay and Twinkle had tied the knot. Since then, Akshay and Twinkle have been giving major #CoupleGoals proving that just as much as love and understanding is essential in a relationship/marriage to work, humour is important too!

On December 12, 2019, Twinkle Khanna posted a picture of onion earrings, which is a gift from her husband, Akshay Kumar. Akshay had went for the shoot of The Kapil Sharma Show for promoting his film, Good Newwz with co-stars, Kareena Kapoor Khan, Kiara Advani and Diljit Dosanjh. Revealing why Akshay got this gift for her, Twinkle wrote, “My partner returns from performing at the Kapil Sharma show and says, ‘They were showing this to Kareena, I don’t think she was too impressed, but I knew you would enjoy them so I got them for you.’ Sometimes it’s the smallest things, the silliest things that can touch your heart. #onionearrings #bestpresentaward.”

In another instance of Twinkle Khanna taking a jib at Akshay Kumar, earlier this year, she had posted a picture of her hubby wearing a black turtleneck. Trolling him for not knowing the meaning of ‘exponentially’, Twinkle had written, "A tip for Indian men: A black turtleneck can make most of you seem exponentially smarter- Just don’t ask the woman sitting on the other side of your granola what exponentially’ means. Also it doesn’t help if you call the other person ’Maha Pakau’ when they give you the definition." (Also Read: Divyanka Tripathi Dahiya Feels Grateful To The Show, YHM For Giving Her 'Life Partner', Vivek Dahiya)

Ever since Twinkle Khanna has stepped into author shoes, she has been on a professional high and was honoured as the highest selling female author of 2018, according to a top ten list released by Nielson Bookscan. Giving a stern warning to her husband, Akshay Kumar and kids, Aarav and Nitara, to not disturb her when she is busy writing, Twinkle had tweeted, “Now if anyone bothers me when I am at my desk-to find missing socks, a missing phone or even a missing child I have a valid reason to say - Talk to the hand:) #PyjamasAreForgiving.” To which, Akshay had replied, “And this seems to be the beginning of Abhimaan Part 2. On a more serious note...I’m so so proud of you.”

While you still might be guffawing over Twinkle Khanna’s wit, remember that fun, throwback Koffee with Karan chat, wherein, when Karan Johar had asked Twinkle about that one thing which Akshay has, but no other hero possesses and the Mela star had replied, “A few extra inches (pauses)…vertically.” And when it comes to taking digs at each other, Akshay Kumar too, isn’t left behind. In an interview on a chat show with Rajeev Masand for CNN, Akshay was asked about what he felt on Twinkle’s career switch (from acting to writing). To which, Akshay had hysterically replied, “Yes, looking at the 14 films what she has done, writing has been her best decision!" (Also Read: Anam Mirza And Asad Azharuddin's First Look From Their Reception, Looks Stunning In A Sequinned Gown)

Well, we couldn’t agree more with Twinkle as ‘Sometimes it’s the smallest things, the silliest things that can touch your heart’!

The moment a couple ties the knot, their entire life changes. From adjusting to each other's irritating habits to remembering every important date, a couple's responsibilities double up, and they cannot even afford to miss it. And an anniversary is a reminder of all those happy moments you have spent with