Shilpa Shetty Kundra is currently judging dance reality show 'Super Dancer Chapter 3' and Raveena Tandon appeared on the show as a guest judge and their 'friend-mode' knew no bound!

We have often seen exes bonding like besties, but have you heard of ex’s once girlfriends behaving like Kumbh mein bichri huyi behene when they meet after a long time? If you haven’t heard of the same, we will show it to and you will once again believe what a strange land the Tinseltown is! One of the reigning actors in the industry, Akshay Kumar was a hit among the masses (especially the females) in the 90s and the legacy continues until now! But do you know, two top actresses who were head-over-heels in love with him, accused Bollywood’s Khiladi of cheating on them and ultimately, moved on in life with another actress? Want to know more? Read on! (Do Read: 'Daayan' Star Priyaa Bathija's Second Marriage With DJ Kawaljeet Saluja Has Hit The Rock Bottom?)

With the very mention of Akshay Kumar, we bet that now you must have realised whom we are talking about! Yes, Raveena Tandon and Shilpa Shetty it is, peeps! Raveena Tandon and Shilpa Shetty’s relationship goes down a long way. From ruling the silver screen in the 90s to sharing a common ‘lover’ interest, the two actresses were then famous for not bonding well. And why would they? Akshay Kumar had apparently cheated on his engaged fiancée, Raveena Tandon with Shilpa Shetty and the latter was cheated of with Akshay’s now wife, Twinkle Khanna. This love triangle had created quite a hullabaloo in the 90s. But as pictures speak a thousand words, Shilpa Shetty and Raveena Tandon have let bygones be bygones and are happily enjoying being the new B-town BFFs! Yes, Shilpa is currently judging dance reality show Super Dancer Chapter 3 and Raveena appeared on the show as a guest judge and their ‘friend-mode’ knew no bound! With Shilpa donning a pastel blue floral lehenga and Raveena looking smoking hot in a red saree, this two 'once sautans' were a treat for the eyes! The Tip Tip Barsa Paani star posted a Boomerang of herself and Shilpa, where they were playing with their chunni and wrote, “Funtime always when workin with friends ! #superdancerchapter3 @theshilpashetty.”

Shilpa Shetty Kundra too, took to Instagram and sharing a beautiful picture with Raveena Tandon, was all-praises for her and wrote, “Was sooo good having my friend @officialraveenatandon as our guest judge on the #superdancer chapter 3 panel today. Sooo much fun.. Miss those old times. Can I be #cheezy and say .. “Swasth raho Masssst Masssssst Raho” Tu ab bhi bahut MAST hai #judgemode #friends #friendsforever #laughs #posers #instagood #superdancer #dance.” Raveena too, posting the same picture and a few more, wrote, “#posers @theshilpashetty #superdancer3.” The stars had also posted a couple of Instagram stories with each other. Check them all out below: (Must Read: Parth Samthaan Writes Emotional Tribute For His Late Dad, Remembers The Last Time He Saw Him Smiling) 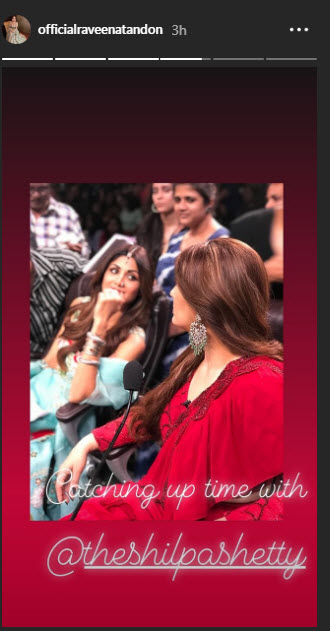 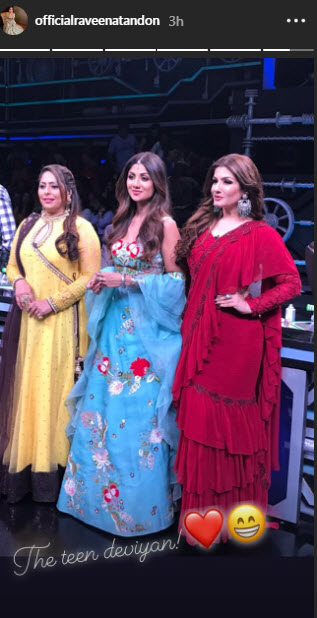 This is not the first time that we are seeing Shilpa Shetty Kundra and Raveena Tandon bonding with each other like how! At Umang 2019, which was held to celebrate the contribution of the Mumbai police, a never-seen moment was witnessed when Shilpa had held Raveena’s hand, which looked like she didn’t want her to go! With sister, Shamita Shetty by her side, look at the three actresses all smiles in their candid best:

On the sets of Super Dancer Chapter 2, both Shilpa Shetty Kundra and Raveena Tandon had taken a fun dig at their past. As reported by Mumbai Mirror, Raveena and Shilpa were giggling over their ‘common mistake’. A source had informed the tabloid, “When Raveena mentioned that she has made a lot of mistakes in life, Shilpa winked, ‘Some of the mistakes were common,’ sending them into peals of laughter. At another point, everyone was discussing Golmaal when Raveena clapped back, ‘Everyone does golmaal in life, Shilpa and I have done it too. You know what I mean, right?” 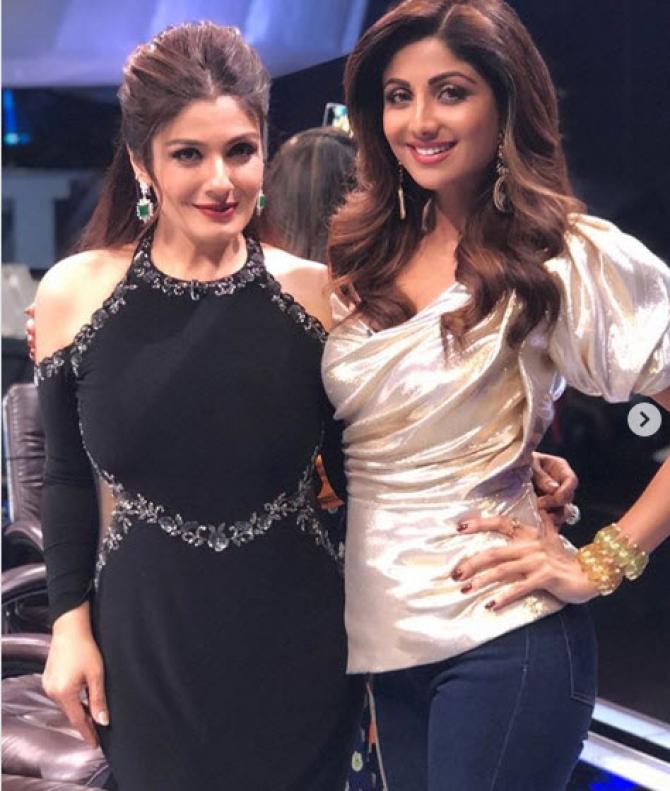 Taking you all into the throwback days, do you know, Akshay Kumar and Raveena Tandon had an elaborate engagement ceremony? At a chat show, Raveena had spoken about their engagement and had shared, “It was a voluntary decision. I was engaged to somebody I knew. This is what I wanted, to lead a very normal life. I quit in advance before marriage because we did think that when there will be last day of my shoot, we will go ahead and get married. Once I re-started my career, he again said that leave it and we will go ahead with the wedding. But, then I told him that once I chose you over my career, but now I will choose my career over you." 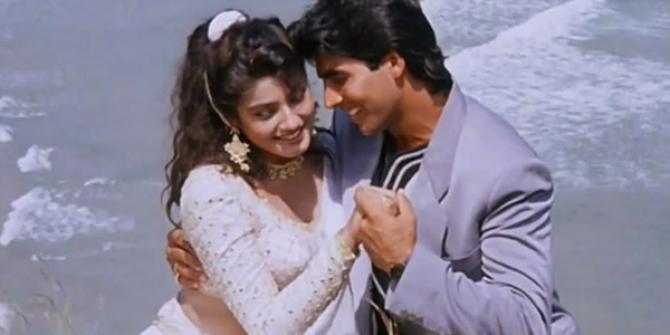 Shilpa Shetty Kundra too, on the other hand, had her own set of revelations to make. Speaking about how unimaginable it was for her to believe that Bollywood’s Khiladi had actually played with her heart, Shilpa had stated, “I never imagined that he could two-time me and that too all along our relationship.” Speaking about parting ways with Akshay, Shilpa was quoted as saying, “It has been a rough period personally. But I'm glad that the ordeal is over. After every dark cloud, there's always a silver lining. All this while, though things were going well professionally, my personal life was pulling me down. It feels good that it's finally behind me.” (Also Read: 'Ishqbaaz' Fame, Navina Bole Sprains Her Ankle In The 9th Month Of Her Pregnancy) 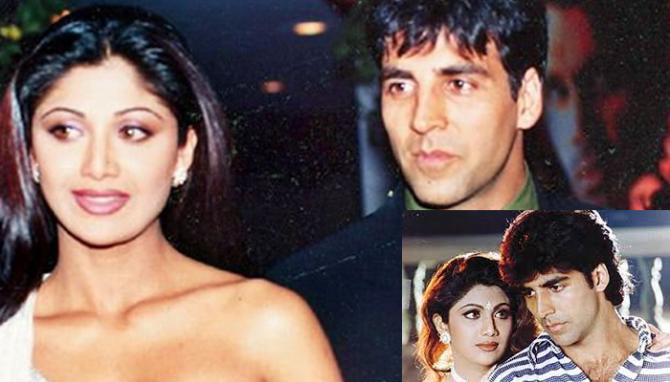 Folks, how do you like Shilpa Shetty Kundra and Raveena Tandon bonding like BFFs? Keep us posted!