Ajay Devgn pens a heartfelt note for his father, Veeru Devgan, on his first death anniversary and shares a video of his unseen pictures. Scroll down to check it out!

Veeru Devgn is a name that needs no introduction. He had single-handedly redefined the scene of action and fights in the Indian film industry. He is known for his excellent, unforgettable work in over 80 films. His unique expertise in directing amazing action sequences was not the only thing the Bollywood industry would forever be grateful to. Yes, he had given an incredible actor to this industry, his son, Ajay Devgn. He had introduced his son, Ajay Devgn in Bollywood with Phool Aur Kante, in which Ajay had done the iconic bike split scene for the first time ever! (Recommended Read: Ranveer Singh's Dad Had Scolded Him For Spending So Much Money On Flowers To Woo Deepika Padukone)

It's been a year since Veeru Devgan had left for the heavenly abode, leaving the whole industry in utter grief, causing irreparable damage. Scroll down to know how did Ajay remembered his father on his first death anniversary! Bollywood's celebrated action director had taken his last breath on May 27, 2019, leaving a grieving family behind. On his father's first death anniversary, Ajay Devgn took to his Instagram handle to relive his memories with some rare and unseen pictures of him. Ajay made a video of his unseen photos and shared it on his Instagram handle. Along with it, he penned a heartfelt note remembering his father and the void that he has left in his life. His note can be read as "Dear Dad, it’s a year since you left. However, I can feel you beside me—quiet, caring, protective; your presence is forever reassuring." Take a look at the video here:

On the chat show, Yarron Ki Barat, Ajay Devgn and director, Sajid Khan had recalled how his father, Veeru Devgan had once saved them from getting beaten up by a mob of around a thousand people. Sajid had narrated the whole incident. In his words, "Ajay had one white jeep in which we used to roam around. One day when Ajay was driving through a narrow lane near Holiday Hotel, a kid, who was running after a kite, came in front of the jeep. Ajay pulled the brakes immediately, the jeep didn't hit the kid but he started crying as he got scared. Some 1000 people gathered around our jeep after that. We tried explaining to them that it was not Ajay's fault and the kid is also all fine. But the people started saying, 'Get out, get out, you rich people drive very fast.' Fir samajh nahi aaya public sab tap tap tapli padne lage. In 10 minutes, the news reached Ajay's dad Veeru Devgan and he bought 150-250 fighters. It was a like Hindi film scene." (Also Read: Kareena Kapoor Khan's 'Matcha' Face Mask With Karisma Kapoor And Soha Ali Khan Is Quarantine Goals) 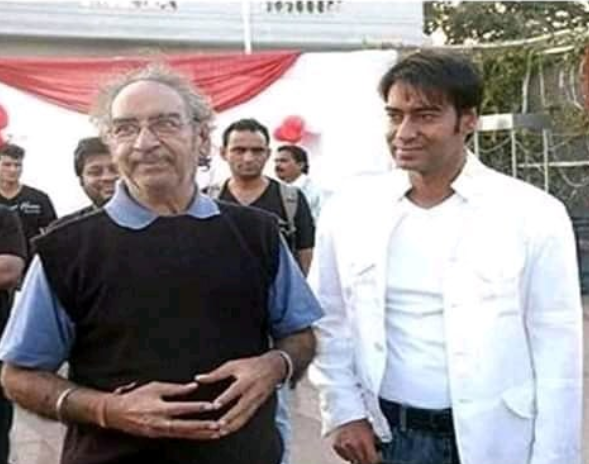 In an old interview, Ajay Devgn had proudly stated that his father will always be the 'Singham' of his life. He had said, "The Singham in my life can only be my father. Because he is a man who came to Bombay at that point in time with nothing in his pocket, wanting to become something, struggled, washed and lived in taxis so he could live here, did not eat food for eight days at times, worked so hard, became a street fighter from there till Mr Ravi Khanna saw him one day asking him whether he would become a fight director. From there, his growth from nowhere to become India’s topmost action director is remarkable." (You May Also Like: Ali Fazal's Funny Apology To Ladylove, Richa Chadha For Not Posting Anything On Eid Is Getting Viral) Do you also share such a bond with your father?