It is one of the happiest moments of a mother to see her child happy and smiling with joy! When your child is loved and praised by all by all, a mom can’t be happier and things like these are no different when we talk about some of the most famous mother-daughter jodis of Bollywood. Any guesses as to who are we talking about? (Do Read: Sara Ali Khan’s Mom Amrita Singh Didn't Recognise Her At The Airport After Her Weight Loss)

Yes, as most of you would have gauged it right, we are speaking about Aishwarya Rai Bachchan and her adorable 7-year-old munchkin, Aaradhya Bachchan! These two are inseparables and have a striking resemblance to each other, don’t you feel so? Of late, Aishwarya, Aaradhya and Abhishek are having a gala time at undoubtedly termed as, one of the biggest and grandest bashes of the year, Isha Ambani and her fiancé, Anand Piramal’s pre-wedding bash.

A latest video captured by shutterbugs showcases mommy-daughter duo, Aishwarya and Aaradhya in a very jolly mood. With almost the whole of Bollywood stationed in Udaipur right now due to Isha and Anand’s pre-wedding bash, two ladies from the Bachchan household are having a blast there. With celebrations and festivities going on almost the whole day, one such video showcases Aaradhya dancing with traditional Rajasthani dancers, while mommy Aishwarya can’t hold her happiness and is seen laughing and clapping for her daughter while she dances. Checkout the video here and get ready to go all ‘awww’:

In yet another video from a party hosted by the Ambanis for Bollywood bigwigs, Aaradhya seemed to make the most out of it. In one of the clippings from the inside party, the star kid is seen shaking a leg to Siddharth Malhotra and Bollywood’s queen, Deepika Padukone, with mommy Aishwarya by her side. Here’s the video: (Must Read: Unseen Dance Video Of Arjun Kapoor And Malaika Arora From Deepika Padukone-Ranveer Singh's Reception)

Anjali Arora Opens Up About Her Bond With Munawar Faruqui, Reveals How Her BF, Aakash Had Reacted

Kangana Ranaut Reveals Being Robbed In A European Country, Says, 'The Whole Day I Was Thirsty'

Suresh Raina's Daughter, Gracia's 6th Birthday Party On A Terrace Is Straight Out Of A Disney Film

Not just this, Aaradhya’s mom and dad, Aishwarya and Abhishek aced the dance floor at isha and Anand’s sangeet ceremony, wherein, one of their actions made us re-live their pre-marriage, ‘Guru’ days! How? Remember their phenomenal chemistry in the film and more specifically a superhit song in the film, Tere Bina? The Bachchan couple created magic at Isha-Anand’s sangeet, as they performed together on the same song after a long time, yesterday, on Isha's sangeet! Checkout a video of the couple dancing beautifully here:

Do you know, Aaradhya goes to Dhirubhai Ambani International School in Mumbai and that Chairperson, Nita Ambani's mother-in-law, Kokilaben, loves her? Aaradhya was one of the few lucky ones to get a special invitation from Nita for the Akash Ambani and Shkola Mehta's post-engagement party! Yes, an insider shared the same with Pinkvilla, "There were other children invited too and that only a handful know is that it was Nita Ambani who specifically invited Aaradhya to the party. Imagine how many people are lucky to get invited to the Ambanis party! When Nita called to personally invite Ash, Nita requested the actress to get Aaradhya too because a small ballet was being presented by some young children at the party. She told Aishwarya that she wanted Aaradhya to enjoy the ballet as the child’s school was closed anyway for spring. Who better than Nita to know that as she’s the Founder and Chairperson of the same school (Dhirubhai Ambani International School in Mumbai) that Aaradhya goes to. She would hardly invite the little girl on a school night for an adult party. Also, Nita’s mother Kokilaben is extremely fond of Aaradhya and always gives her extra stuff like toffee and candies whenever they meet.” 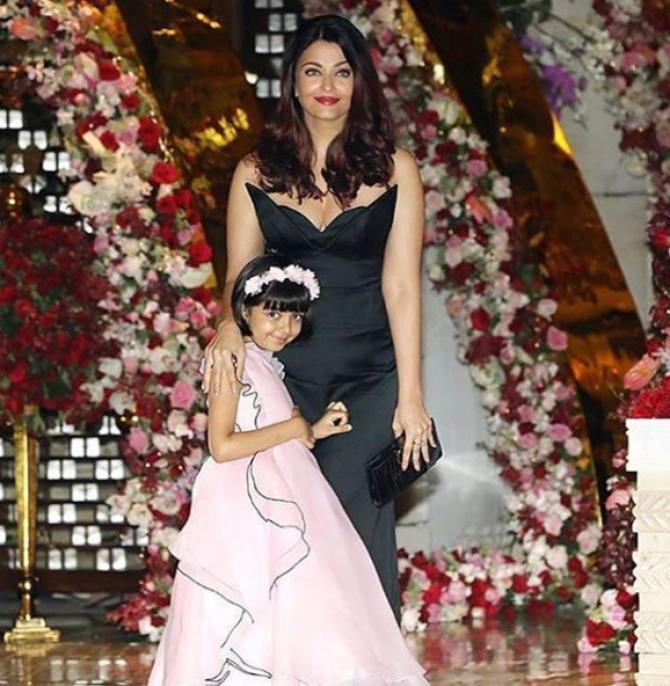 Aishwarya has admitted many a times that she can’t do without her little angel and that is totally visible. Aaradhya is seen accompanying her mom almost everywhere. Speaking about the same, she shared in a throwback interview with Firstpost, “I take her with me everywhere so she is a part of my multi-tasking life. I keep it as real for her as possible, and very normal. Now she is in school like any normal girl. But even when she was a toddler I’d take her to the play-park to be with other children. It becomes difficult in Mumbai. But when I’m travelling I take her out to the park . Even there, there are people who recognize us. But they are normal parents and children. Aaradhya has to have a normal life. I’ve explained to her that is my life and now she’s part of it. So she’s comfortable in it.” 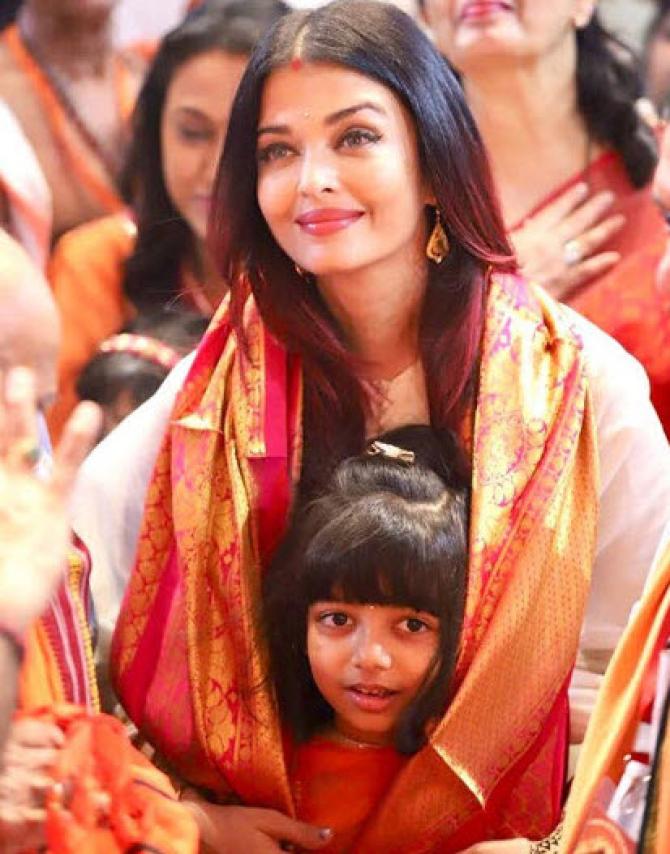 In the same interview, the Jazbaa star also spoke about media attention and paparazzi following her daughter since a very early age. Aishwarya had then shared, “What is really assuring is that she has incredible resilience, by God’s grace. She has seen this (public attention) from infancy. When faced with crowds she becomes very silent and observant, as though taking it all in. Yes, she clings to me in public because there are people screaming and jostling. In fact I get more nervous when I am in crowds with her than she.” (Read On! Ishqbaaaz Fame Additi Gupta Is Getting Married To Boyfriend Kabir Chopra Tomorrow, Details Inside) Aishwarya and Aaradhya, you both give the world some serious mommy-daughter goals! Whu do you guys think?