Aayush Sharma is soaring high on happiness as the quarantine has made him spend most of his time with his two babies, Ahil and Ayat. Check out how he is making the best of his time!

The moment a couple enters the parenthood, their own happiness takes a back seat as all they care about is their kids’ happiness and well-being. They find khushi in the little things done by their toddler. From the first smile to the first walk to the first word, everything and every moment becomes cherishable and special. It seems that having a kid is the ultimate solace for every couple because the amount of happiness their child can bring to them can never be compared to anything in their life. Bollywood actor and Salman Khan’s jiju, Aayush Sharma is soaring high on happiness as the quarantine has made him spend most of his time with his two babies, Ahil and Ayat. (Also Read: Inaaya Naumi Kemmu Gives An Angry Look, Daddy, Kunal Kemmu Reveals The Reason Behind It)

Aayush Sharma is a doting father to his two kids, Ahil and Ayat with wife, Arpita Khan Sharma. Aayush and Arpita had met as a stranger, who ended up falling in love and decided on forever on November 18, 2014. And post the birth of their little munchkins, the life of Khan and Sharma family revolves around these little souls. Every family member can be seen showering love on these siblings and their parents are ready to eat them up with love. Aayush often shares glimpses of his little doll, Ayat on his social media handle, however, the daddy of two does not forget to shower the exact same amount of love on his elder son as well.

On May 13, 2020, Aayush took to his Instagram stories to share videos of his family and his little daughter. While the first story is a video collage consisting, Aayush, his wife, Arpita Khan Sharma, and his two little bundles of joys, Ahil and Ayat. The collage seems like a candid photoshoot session at home, wherein the first clip the couple can be seen posing with Ahil and Ayat, and the second and third clip belong to the father-son bond and the fifth clip is about Ayat and her bond with her elder brother, Ahil. The second video story is too adorable as papa Aayush has to change his voice tone and makes it more husky and squeaky to make his daughter smile. Along with the video, Aayush wrote, “Please avoid my voice… I have to make it funny to make her laugh” atop it. Check out these cute videos below:

Aayush is a protective father, and the glimpse of which was shared by Atul Agnihotri. Ayat’s uncle, Atul Agnihotri had taken to his Instagram handle on May 07, 2020, and had shared a picture of how daddy, Aayush had locked his princess down during the times of Corona. In the picture, Aayush could be seen hugging his daughter, looking at her smilingly, while she had looked amused and perplexed with her father’s gesture. Along with this cute locked-down picture, Atul had written, “Locked down in Papa’s hug #Ayat #AayushSharma @aaysharma @arpitakhansharma." Have a look at the cutest lockdown picture. (Recommended Read: Shweta Tiwari Teaches Her 'Nanhayatri', Reyansh How To Ride A Cycle, Shares Adorable Pictures) Aayush is head over Nike in love with his daughter and Ayat is surely everyone’s favourite hugsie as on April 29, 2020, Aayush had shared a collage of pictures, where Ayat could be seen cherishing her papa’s hugs, lying on his shoulder. Along with the picture, Aayush had written, “Beauty & The Beast” atop it. Take a look at the collage. 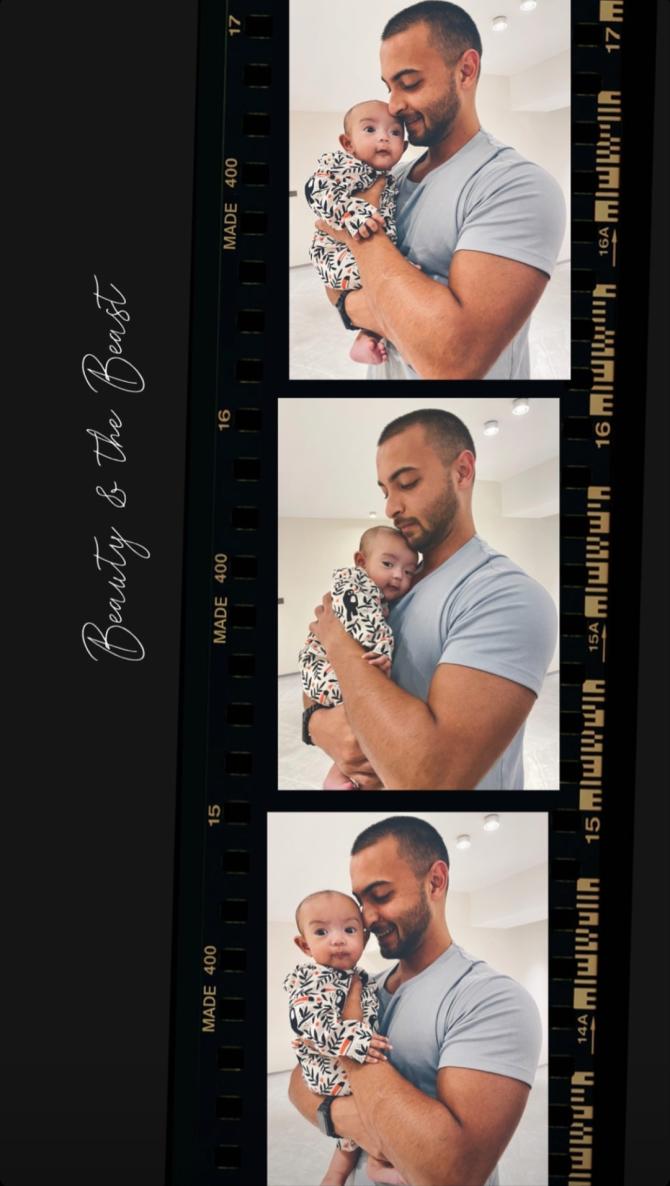 This is not the first time that Aayush has tried to make his daughter smile. On April 6, 2020, Aayush had taken to his Instagram handle to share an adorable video of Ayat, making some funny faces and showing her grumpy smile. Aayush had captioned the video as “Quarantine Drill No. 1 Make this grumpy Smile.” (Don't Miss: Sridevi Had Named Her Daughter, Janhvi Kapoor After This Character From Her Hit Film)

Do you also make funny sounds like Aayush when around babies? Let us know!