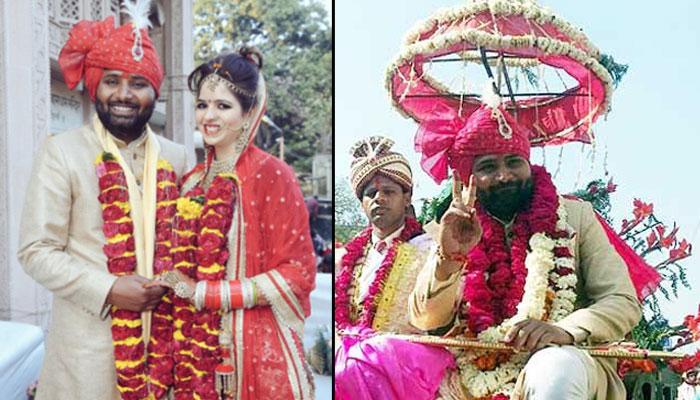 Weddings in India are known for their grandeur and show. People spend huge sums of money on getting the best of everything for their weddings. Given the fact that it is a huge day in their lives, the explicit showcasing of one’s finances is never questioned.

But, have you ever wondered how these grand weddings affect the ones who cannot afford them? At the same time, doesn’t it ever occur to you that spending crores and crores of rupees on a single event is wastage of one’s resources?

Well, in a praise-worthy move towards bridging the gap between rich and poor, an MLA from the Karol Bagh area of Delhi, got married in a community ceremony. Vishesh Ravi, and his wife, Priti, who is a teacher by profession, got married in the Shri Guru Ravidas Vishram Dham temple. The other participants of the wedding were thrilled by the presence of Ravi amongst them.

The community wedding was organised by the chief patron of the Delhi Vikas Sanstha, KC Ravi and it saw eight couples getting married. Among those tying the knot there were a cook, an auto spare parts seller, a tailor and an electrician. The wedding was no less than a huge gala. It had everything a couple could wish for on their big day, ranging from floral decorations to a DJ setup. While talking to a leading daily about his decision to get married din this great humanitarian way, Vishesh said that he did it because it sends out a good message to people. He also revealed that initially his in-laws were not okay with the idea, but later they agreed. The bride also quipped in and said that she had never imagined her wedding to turn out this way, but she was glad that it had.

Well, there are a very few people who believe in sending out good messages through such acts. And these things are the ones that reinstate our faith in humanity and sensibility. Many congratulations to the new couple, Vishesh and Priti. May their married life be a blissful and blessed one.