Aamir Khan's Daughter, Ira Khan Reveals Why Her Engagement Ceremony Was Not A Star-Studded Affair

Aamir Khan's daughter, Ira Khan revealed why she did not invite big Bollywood stars to her engagement ceremony. Read on!

Aamir Khan’s daughter, Ira Khan is on cloud nine at the moment as she got engaged to her boyfriend, Nupur Shikhare, on November 18, 2022. She has been dating him for a long time, and finally, the two made it official by throwing an intimate yet fun engagement party. From her father, Aamir Khan, his two ex-wives, Reena Dutta and Kiran Rao, to Imran Khan, many family members of Ira were seen at the bash.

For the party, the gorgeousness opted for a beautiful sweetheart neckline strapless red gown. On the other hand, Nupur looked dapper in a black pantsuit. Though people have been trolling the star kid for her bold outfit, she looked absolutely gorgeous on her special day and paid no heed to the bullies. Recently, Ira Khan revealed the secret of throwing the best parties in the world. Taking to her IG feed, Ira posted a dreamy picture from her ring exchange ceremony. However, what caught our attention was her insightful caption, in which she stated why she was extremely picky with her guest list for the ceremony. As Ira is Bollywood superstar, Aamir Khan’s daughter, people expected her engagement to be a star-studded affair. But, Ira invited only a handful of people because that is what makes her parties the best ones. She penned:

“This moment. Multiple people on multiple occasions have told me that I throw really good parties. I think they give me a little too much credit. The main difference between my parties and other people parties is the guest list. The people in our lives are what make it happy and fun and quirky and so very, very wholesome.”

Earlier, on June 17, 2022, she had taken to her IG stories and had dropped a sneak peek from her date night with her then-boyfriend and now-fiance. In the cosy picture, the lovebirds were seen clad in baby pink and grey-coloured robes, enjoying an intimate time together at home. The duo was seen hugging each other while posing with all smiles for the camera. Atop the picture, Ira had penned: 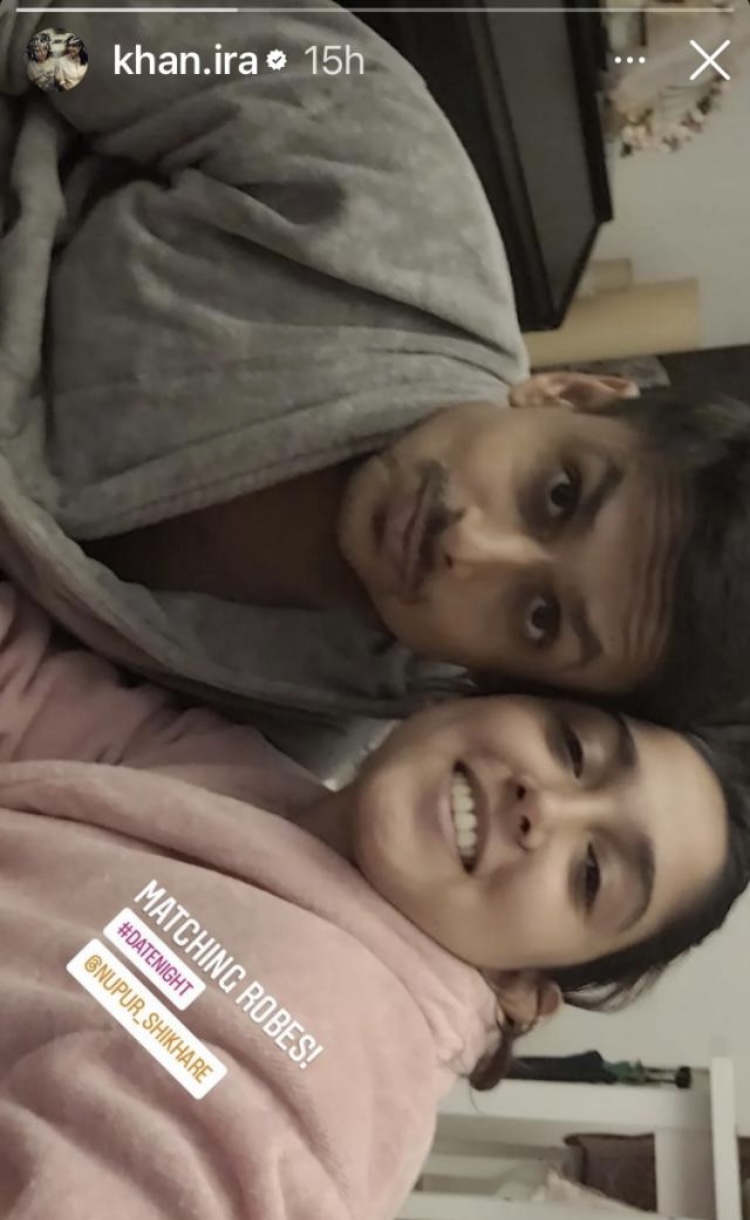 Ira Khan has always been vocal about mental health awareness. Se had also shared how she used to suffer from depression and anxiety in the past. Earlier, she had shared in one of her IG posts about how Nupur's presence had helped her overcome the anxiety attacks. She had stated:

“But while it’s building, talking to Popeye (Nupur) and breathing has helped make it not come to an attack. At least for a few hours. It also depends on if I get re-stressed by another stimulus later. Life’s full of variables. If you’re trying to be mindful, remember to take them all into account.” We are eager to see Ira and Nupur’s wedding pictures!

Next Read: Malaika Arora Talks About The Trolling She Receives, Says 'It Was A Bit Startling And Overwhelming'