On August 30, 2020, Aamir Ali took the internet by surprise when he introduced his daughter, Ayra Ali to the world. As Ayra turned one, the doting daddy shared the first pictures of his baby girl. 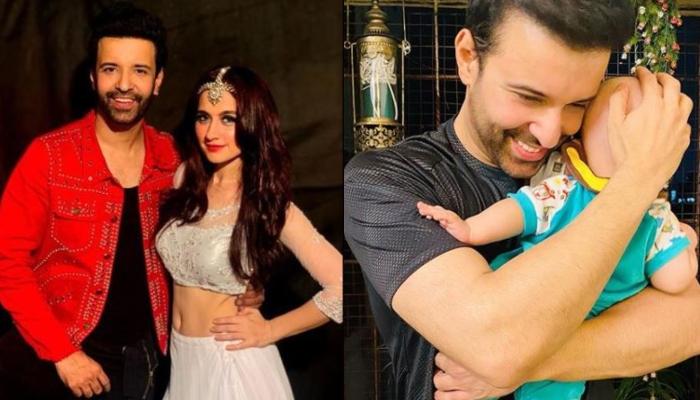 There’s no greater blessing than embracing parenthood as just one smile from your little one turns your sadness into happiness, your sorrows into joy and makes you forget every problem of life. You haven’t experienced love at first sight until you see your little one for the first time, and it is your child, who teaches you the true essence of unconditional love. Alleged estranged couple, Aamir Ali and Sanjeeda Shaikh were blessed with this blessing a year ago, on August 30, 2020, and they had kept this news a secret from their fans. (Also Read: Mahesh Babu And Namrata Shirodkar Wish Son, Gautam With Unseen Childhood Pictures On His Birthday)

It was early this year when reports of Aamir Ali and Sanjeeda Shaikh parting ways after eight years of marital bliss had broken our hearts! After dating for seven years, Aamir and Sanjeeda had said Qubool Hai in a nikaah ceremony on March 2, 2012. But according to a few reports in January 2020, Aamir and Sanjeeda have been living separately for quite some time. And soon after those reports, a Bombay Times report had stated that Aamir and Sanjeeda are proud parents to a baby girl and apparently, the couple had opted for surrogacy.

While neither Aamir Ali nor Sanjeeda Shaikh had confirmed or denied the reports of their separation and welcoming a baby girl via surrogacy, but finally on August 30, 2020, the Woh Rehne Waali Mehlon Ki actor introduced his daughter to the world. As his daughter, Ayra Ali turned one on August 30, 2020, Aamir posted two pictures with his angel and penned a heartfelt wish for her. He wrote, “Didn’t know how angel’s look like, until I saw her exactly a year back… My Lil girl from heaven, had come down to earth… didn’t believe in love at 1st sight, until I saw her de first time… So much has happened this 1 year, my Chota sa jaan kept me strong n going… My love, My jaan completes 1 year… Ayra Ali #ayraali #love #life #30thaugust.”

In January 2020, a SpotboyE report had revealed that Sanjeeda Shaikh had moved out of Aamir Ali’s house in Lokhandwala and had shifted to her mother’s residence in Bandra. And another report had suggested that Aamir was spotted visiting Sanjeeda’s mom’s place to meet their then-four-month-old daughter. A source had informed about the troubles in Aamir and Sanjeeda’s relationship to a media portal, “Yeah, Sanjeeda and Aamir are not staying together since some time. They are having issues.” When Aamir was contacted by SpotboyE to comment on the same, he had retorted, “I don’t know what you are talking about.” (Also Read: Aftab Shivdasani Goes Out On A Stroll With His Baby Girl, Pens A Sweet Note)

Suggesting differences in the marital life of Aamir Ali and Sanjeeda Shaikh, a source had shared to a media portal, “Differences started cropping up between them some time ago, but they were trying their best to not let it hamper their relationship. Matters escalated a few days after Sanjeeda returned from a shoot in London in October last year, and she left for her parental home. Though they continued to be in touch for some time after that, they stopped talking to each other over a month ago. Since the differences are a result of minor issues, we are hoping that they will reconcile.” But when Hindustan Times had contacted Aamir to comment on the same, he had clarified, “All is Ok.”

In a post-wedding interview in 2012, Aamir Ali had spoken about the pressure to starting a family after marriage, and had said, “My mom, my friends and my family members now want us to have a child, but I guess it is too early. But yes, everyone including Sanjeeda and I are pretty excited about having kids. Since both of us are sooo.... fair, we wonder how fair our kids would be! Woh toh pakke firangi honge and agar zyada gore hue toh I would tan them under the sun.” (Also Read: Mira Rajput Kapoor Spills The Beans On Having A Third Child, Reveals The Birthday Theme Of Zain)