8 TV Actresses We Bet You Did Not Know Are Married

8 TV Actresses We Bet You Did Not Know Are Married 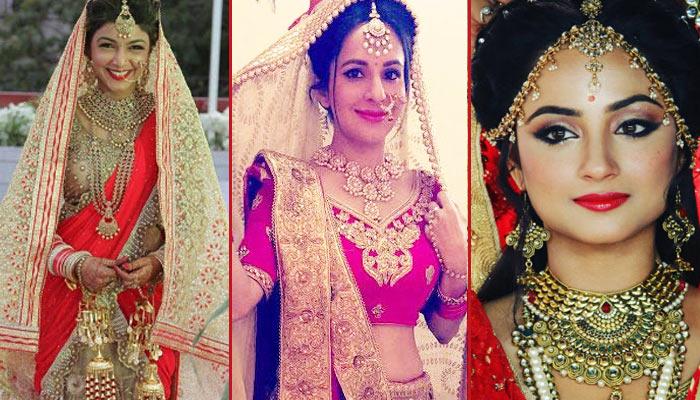 Weddings have always been a big deal in India. Ever heard of the phrase ‘my big fat Indian wedding’? Of course, you must have! In a country that is so steeped in culture and tradition, it becomes second nature to make every effort to impress and reflect the same when it comes to weddings. But, as a matter of fact, not everyone wants to have a big fat Indian wedding.

Recommended Read: 7 Indian TV Co-Stars Who Are Rumoured To Be Dating In Real Life

There are plenty of people who prefer a simpler ceremony, without inviting tons and tons of people. You will be even more surprised to know that we are talking about TV actresses! It is very rare to come across a celebrity who likes to keep things low-key. You would think that celebrities are all about glitz and glamour. But, these 8 actresses just proved you wrong! So, go ahead and scroll down to read about the actresses who are married and you probably did not know.

Actress Ankita Sharma, who is known for starring in TV shows such as Baat Humari Pakki Hai, Rangrasiya and the popular Chakravartin Ashoka Samrat, tied the knot in 2015. She got engaged to Mayank Sharma, who is also an actor, while shooting for Chakravartin Ashoka Samrat. The duo met on the sets of Box Cricket League and got married on March 9, 2015.

This actress from the popular TV show Sasural Genda Phool is not just married, but also the proud mother of a baby boy! Neha, who was also seen in TV shows such as Dil Se Diya Vachan and Rangrasiya, married beau Salil Gautam three or more years back. Salil is an IT professional and the two make an adorable pair. Their son, Avyan, was born in 2015, thus completing their family.

Must See: 14 Sizzling Bollywood Divas Who Married In Their 30s

Binny Sharma, who starred in the show Sanjog Se Bani Sangini, tied the knot with Akshat Gupta, popular for his TV show Do Dil Bandhe Ek Dori Se, in January 2016. It was a hush-hush wedding, which took place in Ahmedabad, the city from where Binny hails. The reception was held in Delhi, Akshat’s hometown. The duo went on a honeymoon to Singapore and Bali.

Famous for starring in many shows including Tu Mera Hero, one of the television’s most famous actresses, Pooja Sharma, found love on the sets with the show's director, Pushkar Pandiit. The two had a private roka ceremony in 2016, and tied the knot on February 22, 2016, in a quiet ceremony.

Also See: 10 Bollywood Divas Who Are An Inspiration For Every Woman Out There

The popular TV show Siya Ke Ram’s Sita, aka Madirakshi Mundle, is also married! Hard to believe, isn’t it? Reports say that she has a small family and is very happily married. The actress has till date never commented on her marital status. Nonetheless, we are so happy for this beautiful actress. We bet you are too!

Badi Doooor Se Aaye Hai fame Shruti Rawat aka Bhairavi, got hitched to her longtime boyfriend Nikkhil Agawane in 2015. While rumours said that they would tie the knot in April 2016, there seems to be no news about the same. We wonder if they are trying to keep it quiet, just like all the others.

You Might Like: 7 Celeb Couples Who Are Married For So Long And Fans Are Excited To See Their Kids

The pretty woman, who played the leading role in Colors’ show Krishnadasi, is married to youth show director Aijaz Sheikh. They had a short and quick engagement in 2015 and went on to tie the knot in January 2016. The wedding was a small affair, with only a few close relatives and friends present to bless the couple. The best part about Sana is that she began to shoot immediately after her wedding. Talk about commitment.

Bubbly actress Roop Durgapal has starred in a number of popular TV shows – Balika Vadhu, Swaragini and Kuch Rang Pyar Ke Aise Bhi to name a few. The actress though, likes to keep her personal life personal, so, nobody knew what was happening in her life. Well, the actress has been married to the man of her dreams, Deepak Naliwal, who works as a creative director for a sports channel. It was an arranged marriage, but the duo were given a long courtship period, so they dated and got to know each other before saying ‘I do’. How sweet is that!

And that folks, was a quick roundup which, we’re sure, has left you stumped. We are sure you are finding this very hard to believe. But, let’s just leave it at this - even though they are celebrities, they are entitled to a sense of privacy. We wish all these actresses the best of everything in life.