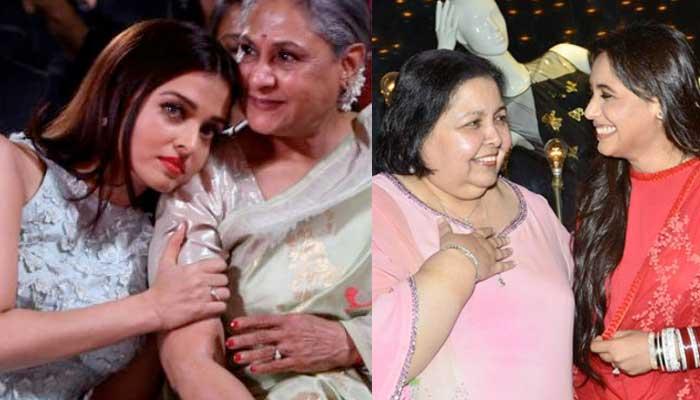 The relationship of a girl with her in-laws is generally perceived to be volatile and fickle. But that doesn’t mean we should imagine all the saas-bahus, nanad-bhabhis and devar-bhabhis’ rapport to be appalling and awful. There are hundreds of examples from the world of Bollywood which makes us think otherwise.

Let’s have a look at a few of our B-town divas, who create a more than just perfect equation with their saasu maa, sis-in-law, bro-in-law etc. and are setting new relationship goals.

Aditya Roy Kapoor must be the happiest brother-in-law on the planet after his mega-star bhabhi Vidya Balan had asked for his autograph. Well, we are talking about the moment when devar, Aditya’s movie Aashiqui 2 got released and had left the actress in complete awe of the beautiful love story it unfolds. That is when bhabhi was all praises for her dear brother-in-law and asked for an autograph making it all amazing for Aditya. Well, a really cool moment. Isn’t it?

The special bonding between the dove-eyed beauty Aishwarya and mom-in-law Jaya portrays one of the best relationships one can dream of. And the entire world witnessed this when the Bachchan bahu was at ease, while resting her head on Jaya Bachchan’s shoulder during an award ceremony (Stardust Awards 2016). Well, such a close intimacy has a lovely story behind it. Aishwarya had won an award for her performance in Sarbjit which she expected, will be announced by hubby Abhishek. However, it wasn’t done by him and that left the lady sad and took to her mother-in-law’s shoulder saying “aww he didn’t announce it”. Well, whatever be the reason, at least this is clear that she treats Jaya like her mother.

There is another daughter-in-law and mom-in-law jodi that proves wedding is not just about joining of two hearts, it is also about joining families. Many times, we have seen a smooth connection between bong babe Rani Mukerji and mom-in-law Pamela Chopra. They share a kind of bond that can positively influence your relationship with your mother-in-law. One such moment was at the launch of Pamela Chopra’s store named Diva’ni. We could see Rani all by her mother-in-law’s side, to support and assist her in her venture. We are happy to see the young Mrs. Chopra conveying a positive and impressive attitude towards her MIL. Perhaps, she is just trying her best to fit into the role of a daughter-in-law. What say?

Seeing mums-in-law and daughters-in-law bonding over a cup of coffee or shopping is not a big deal in today’s era. But, living up to the spirit where you can bare it all in front of your mother-in-law is still a taboo. Well, we aren’t talking about baring your heart, but baring it in a bikini. Yes, the youngest begum of Pataudi pariwar, Kareena Kapoor Khan made an important point by wearing a bikini in the Maldives on her vacation with mom-in-law. They feel free and liberated in each other’s company. Surely, the mother-in-law is a blessing in disguise for bahu Bebo who was quoted as saying:

Kareena you are definitely lucky to be in such a happy state.

Once you get hitched, there is someone you will get attached to even more than your husband. She is none other than your sister-in-law. And, the more time you spend with each other, the better it is. Our Bollywood queen, Aishwarya is well aware of this beautiful rishta and does her best when it comes to building a relationship with her husband’s beloved sister. Mrs. Bachchan forms a lasting bond with Shweta Nanda by catching up with her every now and then.

But, there was one lovely moment which made their camaraderie all the more stronger and adorable. The Maldives trip they went together for Abhishek Bachchan’s birthday saw a cool rapport between the two sisters-in-law. The Bachchan ladies had blast at the vacation and looked gorgeous in their cool summer outfits. The two constantly kept in touch and indulged in girl talk every now and then. So, dear girls, now you know how to win over this relationship.

Every relationship needs time to grow and blossom. This can well be put as an example in the case of Sanjay Dutt’s wife and sisters’ great and the not-so-great moments. It is a well-known fact that sisters Namrata Dutt and Priya Dutt never approved of brother’s relationship with third wife, Manyata. In fact, it was just impossible for the Dutt sisters to stand Manyata as a new family member. But with time things have changed and they are all out of the family tragedy.

The sisters-in-law have started seeing each other more often and pulling together for events and occasions. One such event where we saw the girls as a close-knit family was at Shilpa Shetty's baby shower held in Mumbai. It was really great to see them talking and making time for each other. As per the sources, the three ladies have also been bonding at Sanjay’s Bandra house.

Also Read:8 Bollywood Actors Who Got Married Early In Their Lives

Bonding with the mother-in-law is an important step for any woman. And for the angry man’s wife Kajol, it’s no different. Kajol loves her mom-in-law, Veena Devgan a lot and takes care of her like a doting daughter. As per the reports Veena Devgan was rushed to the hospital after she relapsed, post a chest congestion. But, Kajol took all the charge of looking after her mom-in-law on her shoulders. While she was there with her during the day, hubby Ajay was for night patrolling. And not only this, after the discharge, Kajol’s happiness knew no bounds and she thanked the hospital for their services on Twitter. So, what we can make out from this incident is that Kajol is the same warm-hearted bahu; be it happiness or sorrow.

The oldest nanad-bhabhi jodi on our list, Neetu and Reema get along really well and are more like gossip buddies. They always hang out, communicate about a lot of things and go shopping together. They are mostly spotted together at various events, giggling and chit-chatting. Reema Jain shares a great rapport with bhabhi Neetu and even shares her birthday with nephew, Ranbir. Neetu fondly calls her nanad ‘Bhoks’.

A video of Aish and Big B is going viral from the Stardust Awards 2015, where we can see the excited actress behaving almost like a crazy fan with her sasurji. Though there have been many adorable moments between this jodi, but this has been the cutest one so far. In the video, Aishwarya can be seen saying:

And pat came her reply:

Take a look at the video here:

While you have always looked up at stars as a source of inspiration for fashion, upcoming trends and glamour, this time let’s have other goals from them. There is a lot to learn from the bond that Bollywood divas share with their mothers-in-law, fathers-in-law, sisters-in-law or maybe the kids from the in laws' family. They teach us how to be in good terms with each other.