Weddings are dreamy affairs. Even if some may deny it, but the fact is that everyone dreams of their own wedding since childhood, and hopes it to be the best day of her life. Well, celebrities or not, everyone wants their weddings to be grand and beautiful, right?

Celebrities are no exception! To make their wedding a grand one, many of them choose to get married in the capital of the country. Delhi has become a hub for celebrity weddings. Be it all the wedding ceremonies or just the reception, this city has hosted a lot of celebrity weddings already. Eager to know which ones? Read on to find out! 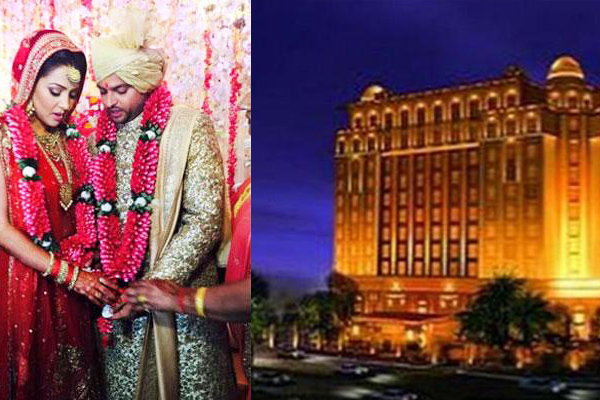 Star cricketer Suresh Raina got married to his childhood love Priyanka Chaudhary in 2015. The sportsman chose New Delhi as the spot for the wedding since most of his friends came from this part of the country. Raina and Chaudhary tied the knot at The Leela Palace in New Delhi.

This hotel is one of the best in the city and so was their wedding! The event was attended by hundreds of important and famous people. Suresh Raina, in his gold woven suit, complemented his bride in her beautiful traditional red lehenga, completely. The couple looked blissful, happy and completely in love! 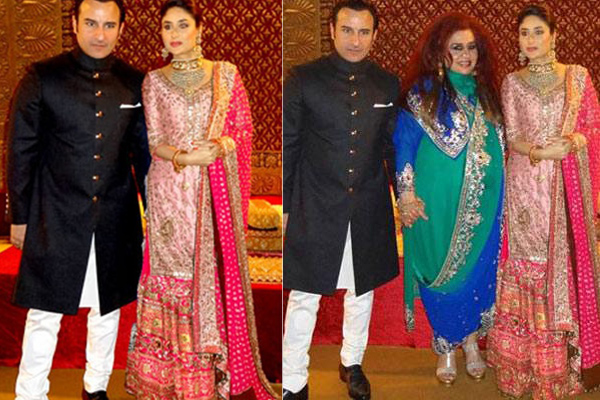 The dapper Pataudi married his lady-love Kareena in Mumbai. It was a simple registered marriage. However, the couple pulled out all the stops for their wedding reception, which took place in New Delhi.

Attended by tons of high-profile celebrities and politicians, the reception was a splendid affair, with beautiful arrangements having been made for the décor and a Mughal-themed buffet. Kareena looked like a blooming rose in her blush pink Manish Malhotra sharara and her makeup was perfect too. Saif Ali Khan looked handsome as ever in an ethnic black achkan teamed up with gold buttons.

You May Like: When Royal Met Regal: Everything You Need To Know About Saif And Kareena's Love Story 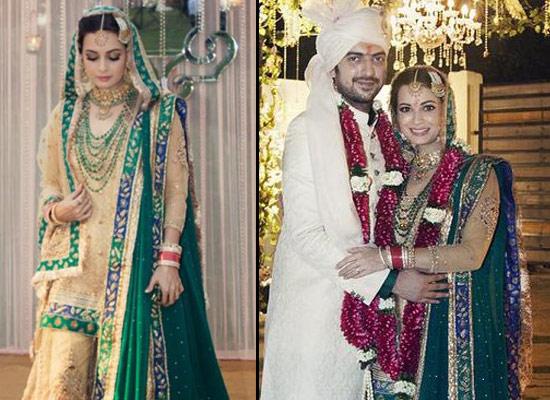 The former beauty queen, actress and director, Dia Mirza tied the knot in 2014 with her longtime beau-producer Sahil Sangha. While their engagement took place in New York, the wedding ceremony was conducted in a farmhouse in Ghittorni, New Delhi.

The couple looked splendid, each dressed in their best. Dia Mirza was dressed in a beautiful beige and green outfit by Ritu Kumar whereas Sahil Sangha sported a Raghavendra Rathore cream achkan. 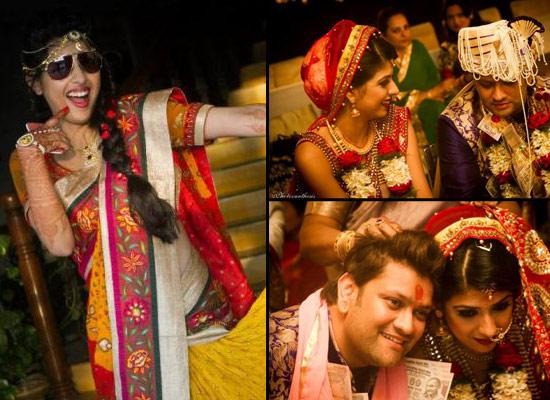 Aishwarya Sakhuja and Rohit Nag’s love story is an adorable one. From Nag spotting Sakhuja’s picture in a newspaper to developing a huge crush on her, the duo slowly started dating. Eventually, they ended up tying the knot in 2014 in New Delhi.

It was a classic winter wedding in the country’s capital and the couple looked super-happy. Aishwarya was dressed in the traditional red and gold lehenga while her beau was dressed in a rich purple sherwani, complementing the love of his life beautifully.

You May Read: 7 Famous Bollywood And Television Celeb Couples Who Had A Gurdwara Wedding 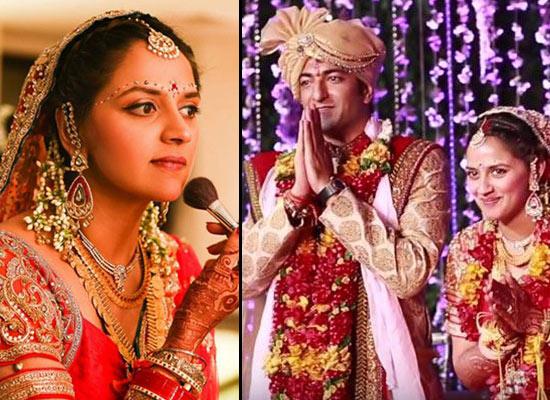 Hema Malini’s younger daughter Ahana tied the knot with Delhi businessman Vaibhav Vohra, in Mumbai, in a grand and larger than lifestyle. However, their wedding reception was held in Delhi, at the Vohra farmhouse. 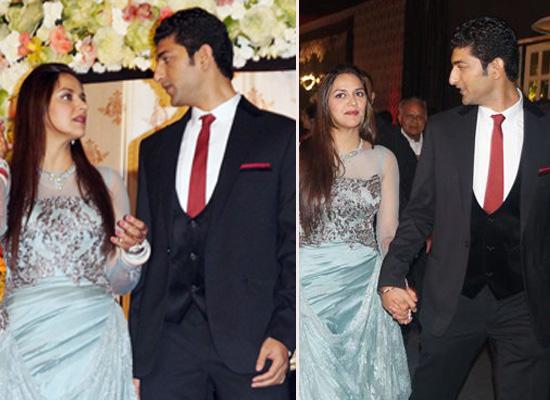 It was a star-studded affair, with several dignitaries who came and graced the occasion. The couple looked great together. Ahana was dressed in a mint green gown by Shantanu and Nikhil. Vaibhav wore a dapper tux with a red tie and pocket square. Here’s another adorable love story. Harbhajan Singh and Geeta Basra dated for five long years before deciding to get hitched once and for all. While this golden couple chose to get married in good old Jalandhar, they organised a beautiful wedding reception in Delhi. 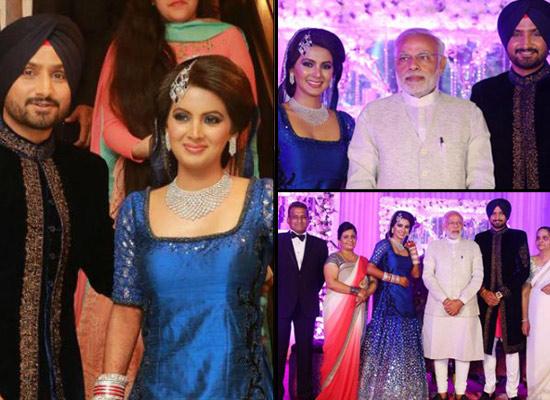 The guest list included an impressive array of people – from PM Modi and other politicians to Shah Rukh Khan and Priyanka Chopra. Geeta Basra looked supremely elegant in a blue lehenga, while Harbhajan looked handsome and sophisticated in a dark blue sherwani. 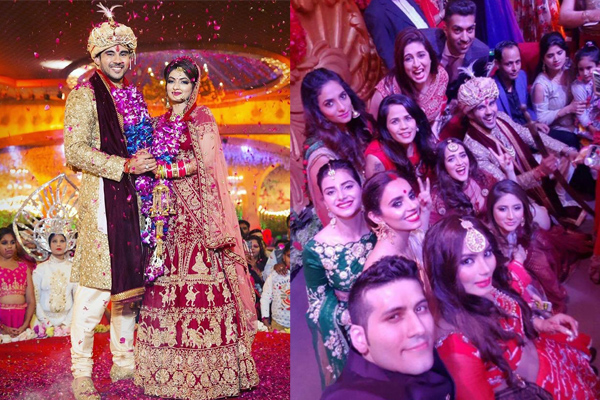 Here is the cute love story about another adorable couple, Dil Deke Dekho fame actor and his lady-love Akanksha Jindal. After their cute proposal on a Yacht ride at the Gateway of India, Mumbai, followed by going on his knees and proposing to marry with an obvious ‘Yes’ to their grand engagement in Hotel Holiday Inn, their wedding was a gorgeous one.

Their pre-wedding functions began from November 29, 2017, and it was a fun-filled and a lavish one comprising of haldi, mehendi and sangeet. The wedding took place in a grand venue, Kohli Tent House in Delhi with industry friends and family who graced the occasion. The Indian cricketer, Virat Kohli secretly got married to Bollywood actress, Anushka Sharma in Tuscany, Italy on December 11, 2017. While it was a close-knit family and friends ceremony, the beautiful couple gave a grand reception in Delhi on December 21, 2017 for their family and friends and it was a high-security celebration in Durbar Hall of the Taj Hotel. Even honourable PM Modi also graced the occasion to bless the couple along with cricketers and Virat’s close friends Shikhar Dhawan, Suresh Raina along with their families also came. 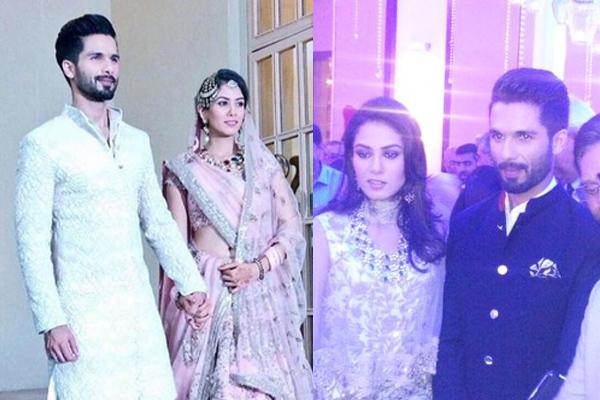 After getting married in a gurudwara wedding on July 7, 2015, the aww-dorable celeb couple, Shahid Kapoor and Mira Rajput hosted a reception party in The Oberoi, Gurgaon the same night. In their elegant attires and their charming face, the newlyweds looked like a perfect couple made-in-heaven. Mira wore Anamika Khanna creation while her hubby Shahid looked dapper in a black bandhgala.

Recommended Read: Bollywood And TV Celeb Couples Who Chose To Tie The Nuptial Knot In A Temple

Maybe there is some strong connection of Bollywood celebs and Delhi that never ever fades away, don’t you think so? All you fellas, you can continue to follow us to keep yourself updated about celebs from Bollywood and telly land.