Gone are the days when at weddings, the bride and the groom are all shy, sweet and subtle, these days, tables have turned. The bride and the groom do everything under the sun to make their wedding fun, memorable and a little hatke. When we talk about hatke weddings, we figured 5 popular celebrities who spruced up their wedding celebrations by making the coolest entry.

Kudos to these celebs who dared to be different on their wedding! 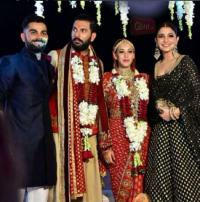 Let’s accept it; Yuvraj Singh did make one of the coolest grooms of 2016, didn’t he? Imagine who does a kickass, carefree bhangra with their partner right in the middle of the airport? And if this wasn’t giving us enough reasons to call him the groom of the year, Yuvi paaji got us talking again when he made a crazy entry on a quad bike at his Goa wedding.

Who said bikes are for guys only when you have pretty lasses like Megha Gupta who slay it and how. After a court marriage in August 2016, Megha Gupta and Siddhant Karnick got married again in January 2017 with all the taam jhaam. The highlight of the wedding was when Meghna made a entry on a Royal freakin’ Enfield. We were bewildered too when this happened!

Here's the video of this macho bride: 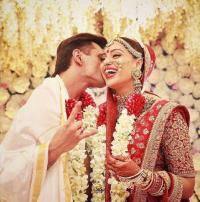 One of the most talked about weddings of 2016, Bipasha and Karan’s wedding grabbed a lot of eyeballs for various reasons. But, one of the reasons, why it was a much hyped marriage is because of the cute little things Karan and Bipasha did at their wedding. This also includes the groom’s super-awesome entry on a hover board. Oh, what a sight it was! 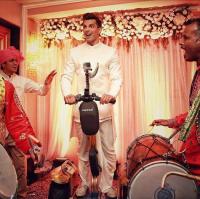 And here's a video too:

Recommended Read: 5 Bridal Looks Of Bipasha Basu From Her Wedding: Decoded For Every Bride To Take Inspiration From

At a time when couples were expected to look all subtle and coy on their wedding day, Gul Panag and her husband, Rishi Attari were busy defining what a cool couple looks like. The much in love couple made a dashing entry on the meanest machine, i.e. a bullet with a side car. Yes, they did it and we are pretty sure they totally set an all new wacky benchmark couples.

Though Sameera Reddy had a hush-hush wedding with her beau Akshai Varde in January 2011, but there’s one thing why people still remember this celeb wedding. And it’s got something to do with Ms Reddy’s better half, Akshai.

Here’s a little background - the gentleman, who owns Vardenchi Motorcycles, has been customising bikes for almost a decade now and has also served Bollywood celebs like Jackie Shroff and Karan Grover. So, on his wedding, he came on a customised mobike and stunned everyone out there.

Must Read: Indian Bride Rides Into Wedding Reception On A Motor Cycle

Our celebs sure know how to go a tad bit crazy on their own wedding! And what better way to kick-start the fun than make the wackiest entry? Can you think of any more television or Bollywood celebs who had the most hatke entry at their wedding? If so, please do share in the comments below and also do tell us which celeb’s entry impressed you the most!