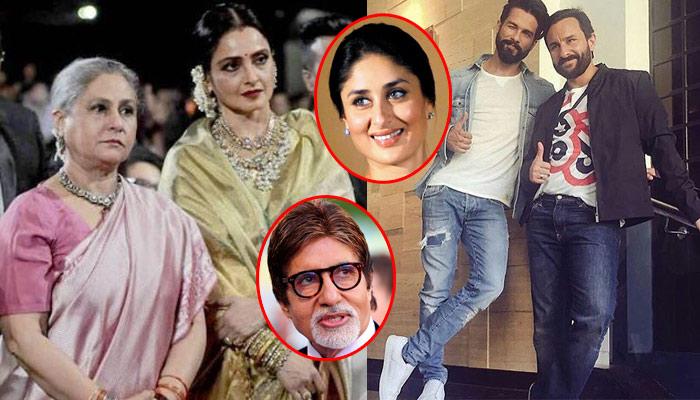 Bollywood has always been in the limelight for its rags-to-riches stories, fairytale weddings, as well as scandals and controversies. And, one thing that has always kept audiences on their toes is the love affairs of the tinsel town stars. While some stars are able to find their happy endings in love, there are a few actors whose relationships end on bitter notes. So, let us talk about a few real-life love triangles of our Bollywood stars.

Recommended Read: Bollywood And TV Celebrities Who Became Dad After 40

Amitabh and Rekha’s love blossomed on the sets Do Anjaane and ended, both on-and-off screen, with Silsila. Although, Amitabh was married to Jaya, it was rumoured that he had secretly tied the knot with Rekha as she turned up with sindoor and mangalsutra at Rishi Kapoor and Neetu Singh's wedding. The duo parted ways when they realised that they do not have a future together.

Ranbir Kapoor and Deepika Padukone met, became friends, and fell in love with each other at the beginning of their career. But, the couple broke up after two years when Deepika found out that the Casanova of Bollywood, Ranbir was cheating on her with Katrina Kaif. Even Ranbir admitted that he cheated on Deepika.

Don't Miss: 5 Bollywood Divas Who Have Been Married More Than Once

From being friends, Shahid Kapoor and Kareena Kapoor became lovers, but soon their relationship started facing troubles. The final blow came when it was rumoured that Kareena and Saif Ali Khan were spending more and more time with each other on-and-off sets of Tashan. Soon after, Kareena ended her relationship with Shahid and found love in the arms of Saif.

Love Story 2050 was the film that bought Priyanka Chopra and Harman Baweja closer. But, the film flopped, and so did their relationship. She then fell for Shahid Kapoor during the shooting of Kaminey, but their relationship also ended soon.

Hrithik married his childhood sweetheart in 2000. This fairytale couple was victim to rumours of several link-ups from time to time. During the shooting of his film, Kites, Hrithik was rumoured to have become cosy with his on-screen ladylove, Barbara Mori. However, at that time the couple put rest to all such rumours. Sussanne and Hrithik went for a divorce in 2014, ending their 17-year-long relationship.

Don't Miss: 11 Bollywood Divas Who Became 'The Other Woman' And Led To Famous Divorces

When Abhishek and Karisma got engaged, it was a big deal. Two of the most revered families of Bollywood were going to be united. But, then things soured between the two under mysterious circumstances. They broke their engagement without any explanation. And, Karisma went on to marry industrialist Sunjay Kapur soon afterwards. However, the two are not together anymore.

Salman Khan and Aishwarya Rai were a much-in-love couple while shooting Hum Dil De Chuke Sanam, but soon things turned sour when Salman was accused of physically and mentally abusing his ladylove. Aishwarya Rai, then found solace in Vivek Oberoi. But, their relationship ended just as soon as it had started.

Kangana Ranaut was a struggler when she met and fell in love with 20 years older Aditya Pancholi. Aditya was married to Zarina Wahab, and was a father, but it did not deter him from falling in love with the young actress. However, things went kaput when news of physical abuse started doing the rounds. The lovebirds soon parted ways for good.

Check Out: Most Expensive Divorces Of Bollywood That Made Celeb Husbands Almost Bankrupt

Romance bloomed between Akshay Kumar and Shilpa Shetty during the shooting of Main Khiladi Tu Anari. Shilpa was deeply and madly in love with the actor. But, the news that Akshay was two-timing her all along in their relationship with her best friend, Twinkle Khanna, left her devastated. This revelation led to a break up after which Akshay married Twinkle.

Also Read: 9 Bollywood And TV Actresses Who Are Above 30, Single And Rocking It!

Zarine gave up her career as a model to be with Sanjay. They had three daughters together, and when she was pregnant with their son, rumours started pouring in that Sanjay was having an affair with his Abdullah co-star, Zeenat Aman. It is believed they even had a secret nikaah. However, things ended badly for Zeenat and Sanjay after he bashed her up during an altercation.

Katrina started dating Salman, and soon her career took off. On the sets of Ajab Prem Ki Gazab Kahani, Ranbir and Katrina’s romance kindled. Ranbir was seeing Deepika at the time. Amongst rumours of cheating, the two broke up with their respective partners and started dating each other officially.

Also Read: 10 Ex-Couples In Bollywood Who Are Still Friends After Break-Up

Kamal Haasan was married to classical dancer Vani Ganpathy. After 10 years of marriage, he got involved with Sarika and left Vani for her. Sarika and Kamal had two daughters before they tied the knot. After being married for 16 years, their marriage also broke apart due to a rumoured affair between Kamal and a much younger actress, Simran.

Raj and Nadeera met while studying at the National School of Drama, and they got married soon after a short dating period. Raj and Smita met on the sets of Satish Misra's film Bheegi Palken, and romance blossomed from thereon, even though he was married with kids at that point. He divorced Nadeera to marry Smita. When Smita passed away in 1986 due to childbirth-related complications, Raj went back to Nadeera.

Don't Miss: 10 Bollywood Divas Who Are An Inspiration For Every Woman Out There

It was rumoured in the 1980s that Sridevi and Mithun had secretly tied the knot. Mithun was already married to actress, Yogita Bali then. But, when Sridevi realised that Mithun would never leave his wife and publicly accept her, she decided to move on.

Father of two, Boney Kapoor, was happily married to Mona Kapoor, before Sridevi took shelter in their house. Boney Kapoor and Sridevi came close to each other during this period while Mona was unaware about their brewing relationship. But, soon the whole world came to know about their hidden relationship when it was uncovered that Sridevi was pregnant with Boney’s child. Soon after, Boney and Mona separated and got divorced.

Check This Out: 6 Bollywood Celebrities Who Got Married Thrice

Shatrughan Sinha and Reena Roy were a hit couple both on-screen and off-screen. After doing a couple of films together, they grew fond of each other. Reena wanted to marry Shatrughan even after knowing that he was already married to Poonam Sinha. But he refused, leaving Reena with no other choice, but to move on.

Javed Akhtar was married to Honey Irani and had two kids when he fell in love with Shabana Azmi. Javed eventually divorced Honey Irani. Although, Shabana’s parents were against their marriage, they went ahead and tied the knot.

Check Out: 7 Bollywood Stepmoms Who Share A Beautiful Bond With Their Stepchildren

Dharmendra fell head over heels in love with Hema Malini on the sets of Tum Haseen Main Jawan. Even though he was married to Prakash Kaur and was a father of two children that did not stop the 'He-Man of Bollywood' from wooing the Dream Girl. After some time, Hema Malini finally said yes to his proposal and married him. Both actors converted to Islam before marriage, since Dharmendra’s first wife refused to divorce him.

Raj Kapoor was married to Krishna Kapoor when he fell in love with Nargis. But, their romance soon bit the dust when the actor refused to leave his wife for Nargis. The heart-broken Nargis then left him, and later married Sunil Dutt.

Everything was fine in Guru Dutt and Geeta Roy’s marriage until the actor met Waheeda Rehman and launched her Hindi film career with CID. The growing proximity between the actor and his muse created some tension in his marital life. As a result, Guru Dutt and Geeta Dutt eventually separated.

So, here we are now! These were the Bollywood's 21 most talked about love triangles ever. Who is your favourite couple amongst all of these? Do let us know in the comments section below.