List of 13 Bollywood celebrities who were fat in the past and have lost oodles of weight to look slim and fit on screen.

Are you tired of your bulging belly and those 'googly-woogly' cheeks? Relax! You are not alone in your battle with the bulge. Our dear Bollywood stars too have faced their share of “weighty” issues in the past. So, worry not! If they can do it, so can you. But for now, just sit back and enjoy the ride as we look at the celebs who went from 'fat to fit'. 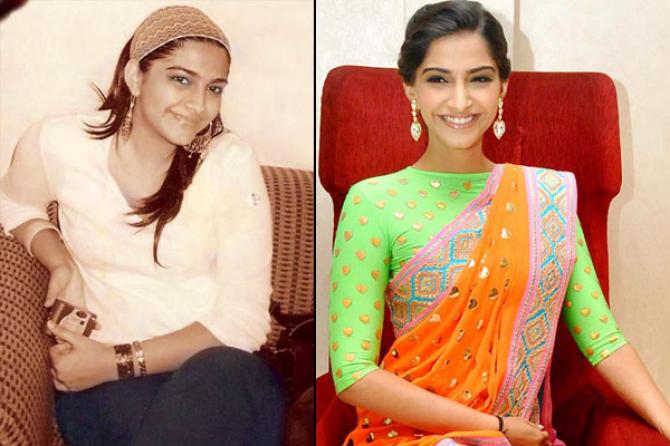 On number 1, we have our darling 'Miss Style Icon' of Bollywood, Sonam Kapoor. The diva, who is known for her clothes rather than her acting skills, weighed 86 kilos before she signed her first film, Saawariya. She reduced 30 kilos to get that subtle yet sensuous look in her film. If you want to know what the diva did, click here.

In an interview, while talking about her weight loss, Sonam said:

“In all fairness, it was my mother who helped me get rid of my excess weight. The first thing she did was to keep me off the stuff I was so fond of as a teenager- chocolates, ice creams, fried foods and sweets.” 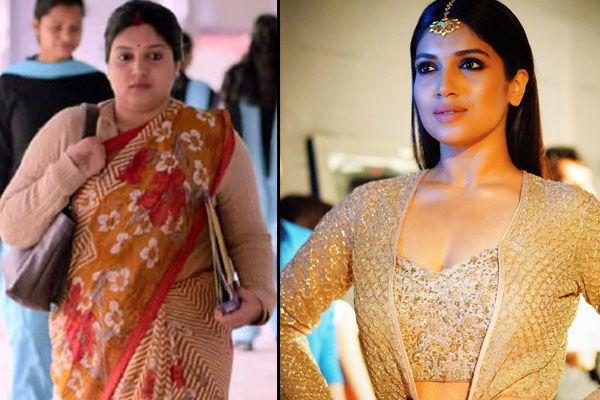 The Dum Laga Ke Haisha actress already weighed 72 kgs, when she got an offer for this movie. And for this, she had to put even more weight! But, the actress broke all the stereotypes and made her debut with a role that very few girls can dare to do. However, soon after the film, the actress managed to drop all the extra fat and looks super-fit now! The Mumbai-born actress successfully lost about 27 kilos in a few months, that too without starving herself of her favourite foods.

Must Read: The Incredible Weight Loss Journey Of Bollywood Actress Bhumi Pednekar Will Leave You Inspired The young star of Bollywood who made her debut as a lead actress in the movie, Student Of The Year, was not always as fit as she looks now. This young lady was made to follow a strict diet under daddy, Mahesh Bhatt’s supervision. Alia lost 16 kgs for her dream role in just 3 months after working hard and fighting off all the fat.

To check out her journey from being fat to fit, click here. 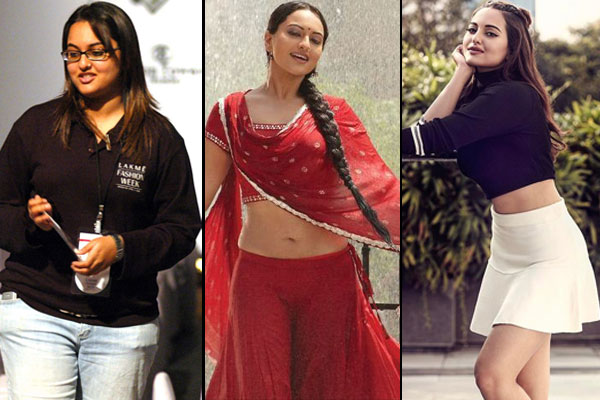 Well, on number 4, we have the beautiful daughter of Shatrughan Sinha who weighed 90 kilos. But to become Salman’s "Rajjo", Sonakshi reduced 30 kilos and achieved a svelte figure for Dabangg. 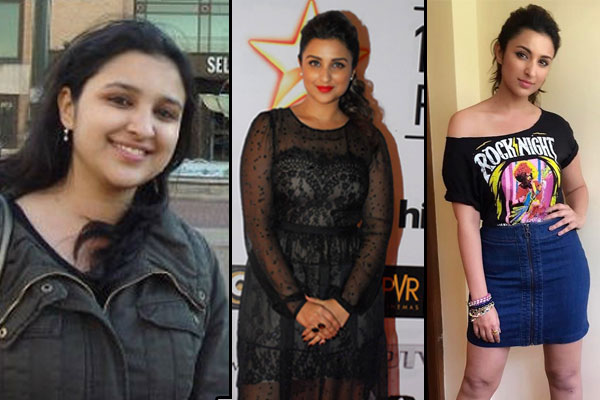 The Meri Pyaari Bindu actress once admitted in media that before joining films, she was not just chubby, but today she is anything but fat. The actress worked really hard and shed all the extra flabs and surprised everyone with her new avatar where she went from size 38 to 30! She fought intense media scrutiny following her debut film, Veer. She was almost written off by critics for her 'larger than frame' screen presence. However, the actress worked extremely hard on her fitness and has now finally shed off all those extra kilos. She used to weigh 100 kilos and now, in her new and fit avatar, Zareen is 57 kilos. Way to go girl!

You may like: This Is How Bollywood Beauty Zareen Khan Transformed From 100 To 57 Kilos The poster face for size-zero, Kareena Kapoor, was lashed out by critics for her figure when she did Yeh Mera Dil Pyaar Ka Deewana. But, Kareena made a strong comeback in Tashan. She put the screen on fire by flaunting her super-sexy and ultra-slim body in her debut bikini scene. Her incredible shrinking figure became a national obsession almost overnight. 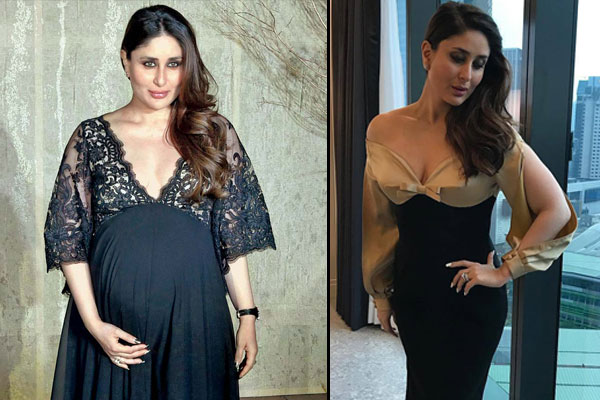 On December 20, 2016, Kareena welcomed her little prince, Taimur Ali Khan Pataudi, and within a few months, the actress has already shed all the post-pregnancy flab.

Must See: Adorable Photos Of Taimur Ali Khan Pataudi That Prove He Is The Cutest Star Kid On The Block 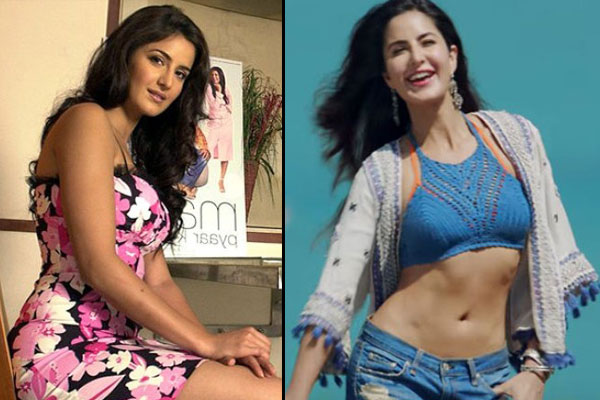 Our super-gorgeous Sheela too had her days of baby fat. Yes, Katrina was never fat, but was not fit either. Well, watch her first film, Boom, you will see the difference between then and now. That sharp and symmetrical jawline was definitely missing during her initial days in Bollywood. Remember, the actress who flaunted her athletic body with those washboard abs in a bikini? Yes, we are talking about the daughter of Dharmendra and Hema Malini, Esha. She was shunned by the industry for her baby fat in her debut film Koi Mere Dil Se Pooche. Before slaying it in a bikini for Dhoom, Esha shed all the extra kilos and flaunted those killler abs. 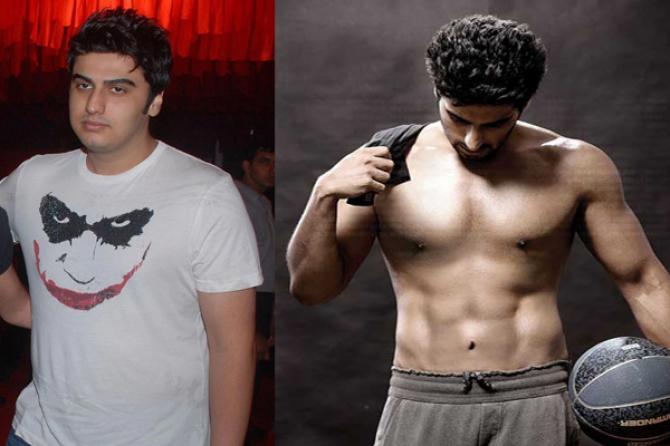 Our Bollywood ladies are not the only one struggling with weight problems. Son of producer Boney Kapoor, Arjun, made his debut in the industry with Ishaqzaade. Arjun, who flaunted his six pack abs in Chokra Jawan song, weighed 130 kilos before being signed by Aditya Chopra for his film. Eventually, this Kapoor boy managed to lose 50 kilos in four years. 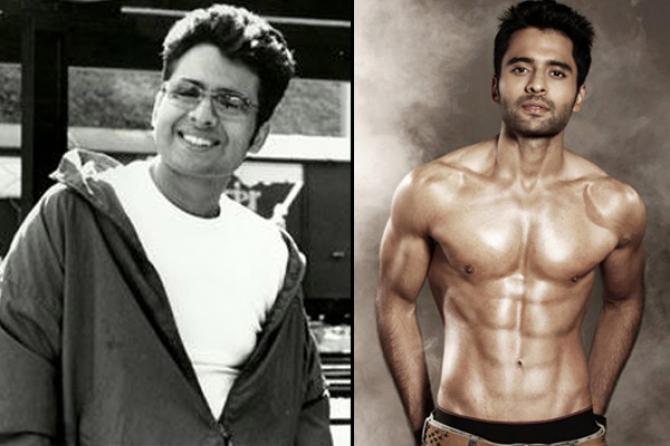 Now a fit one, Jackky Bhagnani looked exactly the opposite in his childhood days. Before his debut film, Kal Kisne Dekha, he weighed 130 kgs. Jacky, who now confidently poses for those shirtless pictures, had to go under gruelling exercise regime and strict diet plan for over two years to lose 60 kgs. 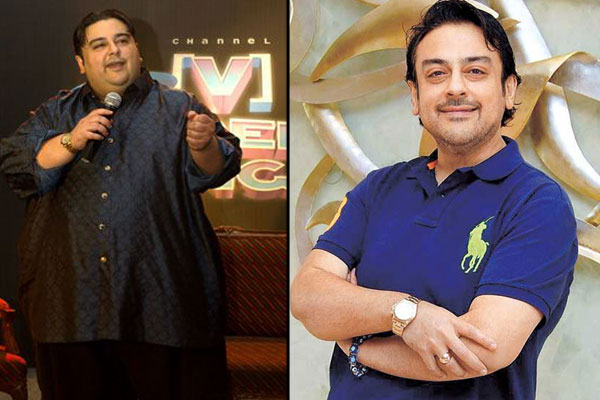 Singer, who used to travel with a custom-made wheelchair just because of his weight, literally shocked the world with his drastic weight loss in 2007. Adnan, who weighed 206 kgs, lost over 130 kilos in just one year.

Must Read: From 230 Kgs To 75 Kgs, The Incredible Weight Loss Journey Of Bollywood Singer Adnan Sami The ex-boyfriend of Kangana Ranaut who made his debut in Haal–E–Dil, was quite "Big" as a teenager. Adhyayan lost 45 kgs in five months to get his perfect physique. With an inspiring daddy, Shekhar Suman for motivation, we assume, this would not have been such a problem for Adhyayan.

Weren’t these fat-to-fit stories of Bollywood celebs inspiring on so many levels? Well next time, if you need some motivation to get gymming, just look at these legends!

Next Read: 9 Celebs Who Had A Drastic Weight Loss And The Diet They Followed