Veteran Actress, Asha Parekh Ji Shares Her Experience Of Never Getting Married And Not Regretting It

Veteran Actress, Asha Parekh Ji Shares Her Experience Of Never Getting Married And Not Regretting It

In the ’60s when women were considered a burden and especially unmarried women, veteran actress, Asha Parekh ji took the bold step and decided to never get married and she doesn't regret it. 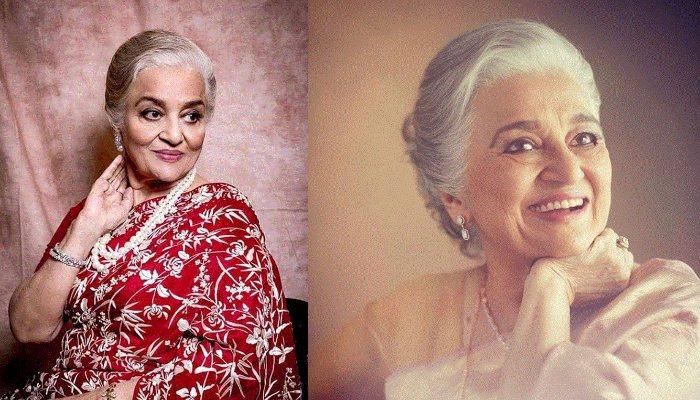 Who can forget the brilliant performances of veteran actress, Asha Parekh ji in the movies like Kati Patang, Teesri Manzil, Love in Tokyo, Aan Milo Sajna, Dil Deke Dekho? We grew up listening to our parents praising Asha ji for her exceptional acting talent and stunning looks. She was considered one of the best actresses of Bollywood and has given us many memorable performances to reminisce. Not only her professional stint, but her personal life was also one of the reasons why she was always in the limelight. In the era when unmarried women were considered a burden on the family, Asha ji chose to follow her heart and not tie the knot and enjoy her singlehood. She became an inspiration to many and still continues to be! (Recommended Read: Kajol And Her Hubby, Ajay Devgn Sizzle On The Cover Of A Magazine, Give Major Couple Goals)

Glowing at the age of 77, Asha Parekh ji still makes every girl envy her beauty and simplicity. “Marriage is not all rainbows and butterflies; you have to give in to your partner’s whims every now and then, and that’s a two-way street.”- this is the advice that Asha ji gives to all the millennial couples. Asha ji, in an interview with Verve Magazine opens up about her experience of not getting married, never regretting it and the only regret she has in her life. She had always portrayed the role of a sweet girl who fell in love with a boy from different caste or status but in real life, always remained aloof falling in love.

During the interview, when Asha ji was asked, “Often, people get married simply because they’re petrified of being alone during old age. Did you ever have any such apprehensions?” To this, Asha ji replied, “Not at all. I saw the kind of people that were out there. When I went out with the boys that my mother set me up with, I was completely put off by the whole premise of marriage. They were so fussy! They’d take longer to get ready than I did and would keep preening in the mirror. The narcissism was repulsive. I know it seems silly but these little things really nettled me. There was also the case of my heroes Rajesh Khanna and Vinod Khanna getting an earful from their girlfriends during outstation shoots because they were gallivanting and making merry at night instead of being in bed. I would’ve never been able to take someone dictating terms to me — I was just not cut out for it.”

Though not married, Asha ji had once came very close to tying the knot with a professor. Recalling the incident, she revealed, “I did come very close to tying the knot once with a professor from the US. I was visiting him and we were in a cafe at 2 a.m., when he turned to me and nonchalantly said, ‘I have a girlfriend and you’ve come in the way’. It completely caught me off guard. In a way, that was the final straw for me in this whole wedding business. My friend was travelling with me at the time and when I told her that we were returning to India that very instant, she asked me how I wasn’t gutted that I was cutting ties so unceremoniously with the man I was supposed to be marrying.”

Asha ji added further, “When I gave her the unedited version, she was livid, but I told her to let it go and, with time, got over it myself. However, his birthday came around a few months later and I expectantly sent him presents, hoping to give the relationship another shot. When I called him, he began rambling in Gujarati and that seemed odd to me because we normally conversed in English. That’s when I learnt that he was in bed with his girlfriend while talking to me. It upset me, and I took it quite badly for a while, but eventually, I got over it. I am a firm believer of the phrase ‘This too shall pass’. And it did.” (Suggested Read: Janhvi Kapoor Reminisces How Her Childhood Smells Like Her Mom, Sridevi, Reveals A Special Moment)

Asha Parekh's only regret in life is not being able to adopt a child and nurture him/her. During the interview, when she was asked, “Does she believe that bringing one up would have altered her life,” she stated, “I love children. I did come across a child that triggered a fervent maternal instinct in me, but he was suffering from some birth defects and the doctors refused to let me adopt him. They asked me to select another child, but my love for this child I didn’t even know was unrelenting and I was adamant about adopting only him. But it was not to be. Soon after, my mother suffered a stroke and I then got occupied with looking after her. I was very attached to mum and the very notion of having another being to care for besides her then seemed inconceivable.”

Friends have always helped Asha ji to hold her sanity and fight bouts of depression. Answering “Do you understand friendship better than love?” Asha ji said, “Absolutely. My friends are why I’ve managed to hold on to my sanity and fight bouts of depression. Shammiji (Nargis Rabadi) was always with me before she passed away last year. I remember that I was shooting for a dance sequence when the episode with the aforementioned professor happened. She was on set at the time and she could tell that something was amiss. I didn’t want to cause any kind of drama in front of my co-stars so I kept brushing her off, but she could tell I needed a shoulder to cry on. Finally, I told her the whole story in between shots and her first reaction was to cuss him. It was like instant therapy. And so, I really believe that one should have friends.”

Asha ji further added, “Saira (Banu) and I go years without meeting, but then we make sudden plans and catch up on everything. She can’t leave her home because of Yusuf (Dilip Kumar) saahab’s health. When I visit her she adorably complains about the fact that I stopped dyeing my hair black. I am closer to Waheeda (Rehman) and Helen because we travel together. Recently we went to Turkey and did a Scandinavian cruise. Waheeda and I then went to Alaska and Canada, and just a month ago, we went to Tadoba Andhari Tiger Reserve. You can never completely confide in your mother or a sibling, but close friends will never judge you.” (Must Read: Ananya Panday Spills The Beans On The Hidden Talents Of Her BFFs, Aryan Khan And Suhana Khan)

Don’t you agree that Asha Parekh ji is a true inspiration for all of us? Keep us posted.