Known as the first family of Bollywood, the Kapoor clan is the patriarch of Hindi cinema. Starting from the veteran actor, Prithviraj Kapoor to Ranbir Kapoor, the entire Kapoor family is whole-heartedly devoted in the entertainment business. Whether it is acting, producing or directing, this Bollywood family has been ruling the big screen for ages.

The year 2020 had been a difficult time for everyone due to the onset of the global pandemic but for the Kapoor clan, the loss was much bigger. On January 14, 2020, daughter of Raj Kapoor, Ritu Nanda had bid adieu to the world after her six-year-long battle with cancer. She was the sister of Randhir Kapoor, Rishi Kapoor, Rajiv Kapoor and Reema Jain. On April 30, 2020, the Kapoor family had gotten another major shock with the death of Rishi Kapoor, after a two-year battle with leukemia. The family was mourning the loss of two important people of their parivaar, the biggest bolt hit them on February 9, 2021, when Rajiv Kapoor suffered a heart attack and departed for the heavenly abode at the age of 58. 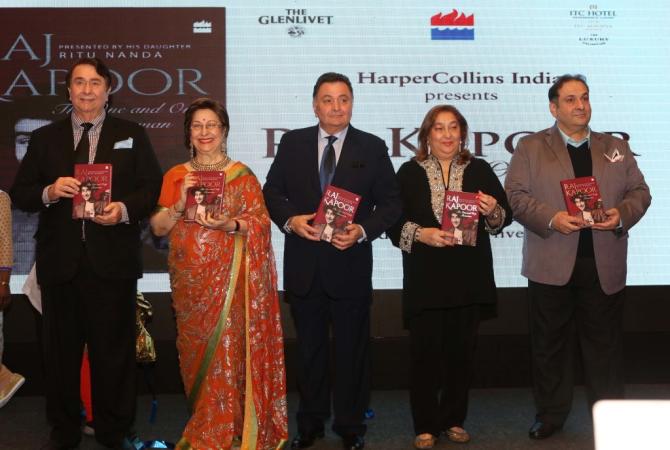 A few moments back, Rishi Kapoor’s daughter, Riddhima Kapoor Sahni took to her IG stories and shared a priceless unseen picture of her father with his four siblings. In the throwback picture, Rishi Kapoor was seen posing with Ritu Nanda, Randhir Kapoor, Rima Jain and Rajiv Kapoor. The picture brought an array of nostalgic memories and atop it Riddhima wrote, “Priceless” followed by flowers and a heart emoticon. 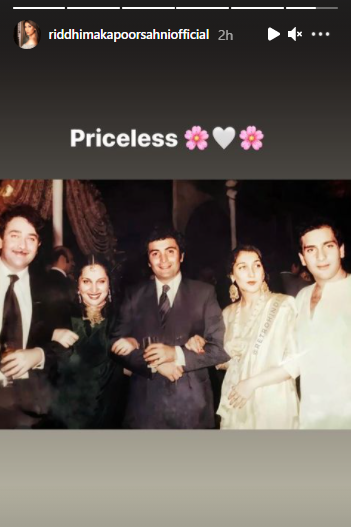 On Rishi Kapoor’s 68th birth anniversary, Riddhima Kapoor Sahni had penned an emotional wish for her late father. Sharing an array of pictures, Riddhima had written, “Papa, They say when you lose someone, you can't live without -your heart will badly break! But I know you are living in this broken heart & will be there forever! I know you are watching over all of us & ensuring that we live by the value system you instilled in us! You gave me the gift of compassion - taught me the value of relationships & made me the person I am today! I miss you each day & I will always love you! Celebrating you today & always - Happy Birthday.” 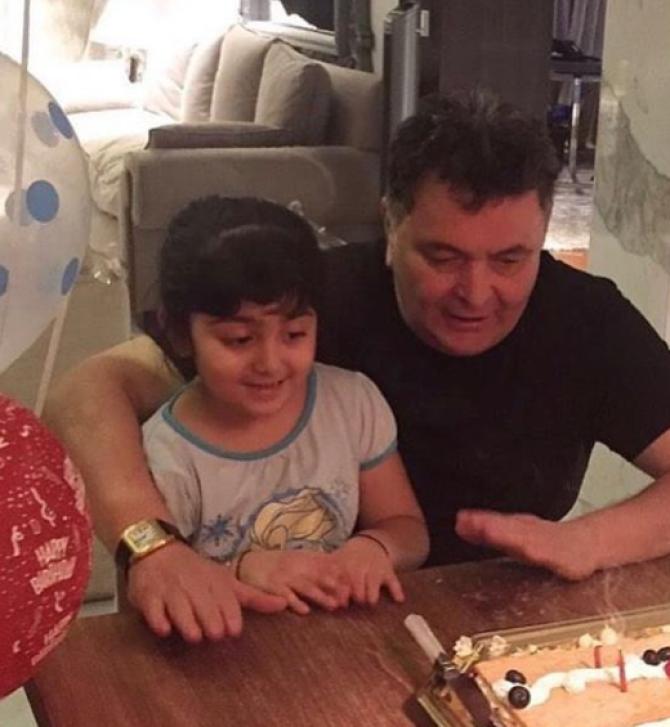 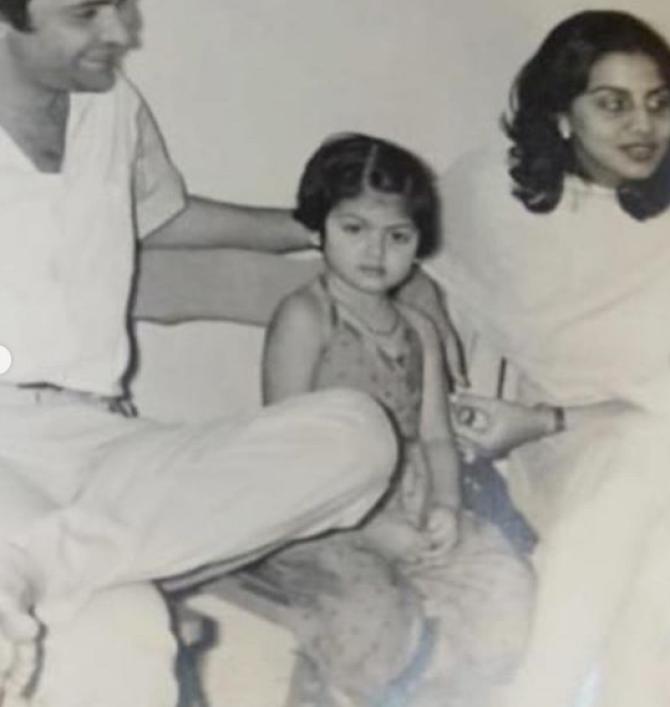 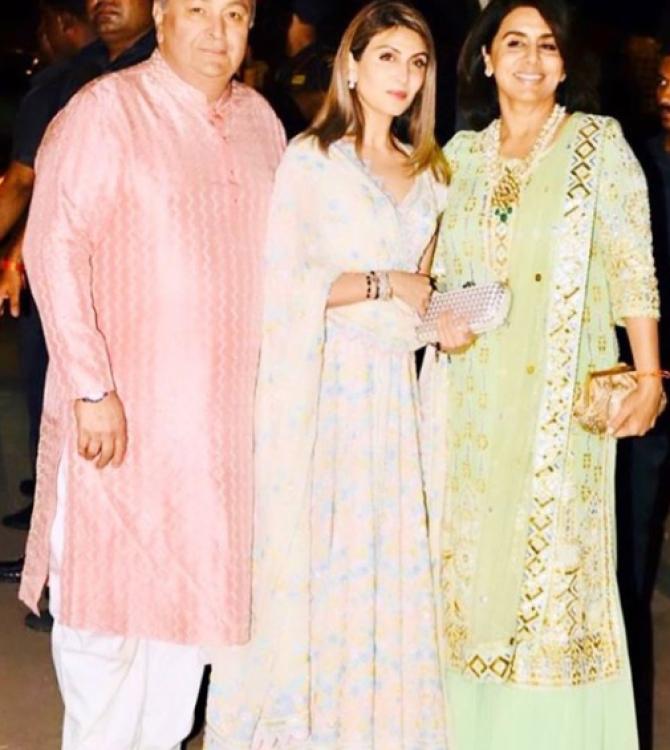 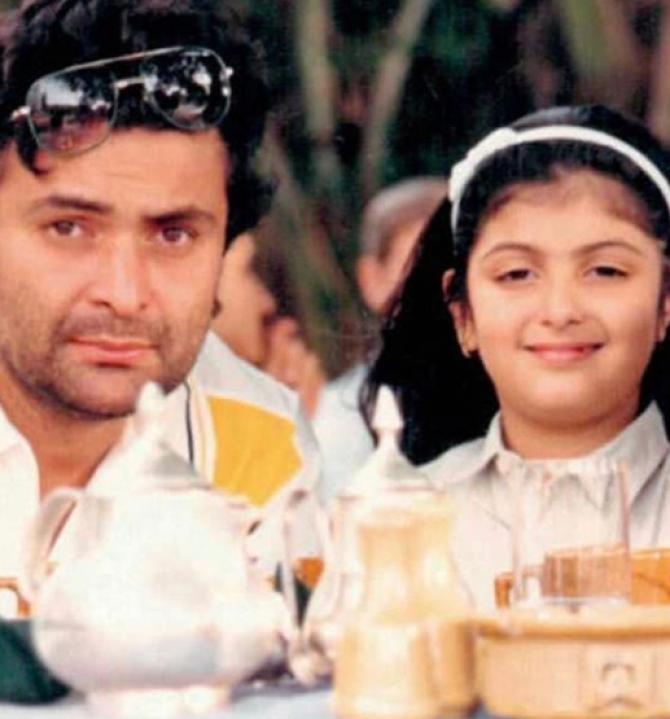 Rajiv Kapoor’s untimely death had shatterd Randhir Kapoor. In an interview with ETimes, Randhir Kapoor had talked about the pain of losing his three siblings. The actor had shared that his brother, Rajiv had no prior medical condition. Randhir had said, "I am left alone in this house. Rajiv was a very gentle and extremely jovial person. It is so tough to believe that he is gone. He had no medical history. His health was simply fine; he had no problems whatsoever. I don't know what's happening. I was equally close to Rishi and Rajiv. I have lost four people from my family--my mother Krishna Kapoor (October 2018), eldest sister Ritu (January 14, 2020), Rishi and now Rajiv. These four were my central core, with whom I did most of my talking." A few months back, we had stumbled upon an unseen picture of Randhir Kapoor with Rajiv Kapoor from a party and the picture had exuded the love and care Randhir had for Rajeev. In an interview with the Times Of India, screenwriter, Rumy Jaffery had talked about the bond between the two brothers and had said, “Rajiv Kapoor was like all the other popular Kapoor brothers--talented and a good human being. All three brothers shared a great bond. In fact, for Daboo ji (Randhir), Chimpu was more like a son than a brother.” It is indeed a priceless picture. What do you think? Let us know.