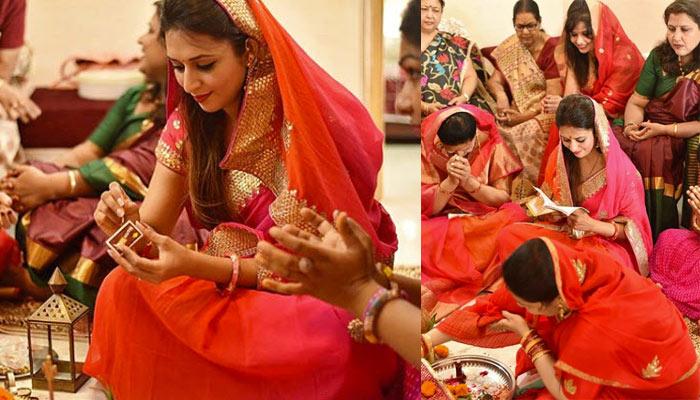 Like all other Hindu festivals, Karva Chauth is celebrated with great joy, happiness and enthusiasm. No stone is left unturned when it comes to celebrating this festival. Every family unites as one, on this day and women break their fast together, on the appearance of the shining moon. However, what most of us know about Karva Chauth, is through what we see in Bollywood films. The women fast for a day for the health and well-being of their husbands.

Recommended Read: Dear Bestie, These Are Some Amazing Mehendi Designs You Can Flaunt This Karva Chauth

But, is it really as grand and lavish as they show it to be in films? Or is it a simpler, more close-knit function? What are the age-old traditions and rituals that are associated with Karva Chauth? Have you wondered about these questions often? Well, you will now have all the answers. Scroll down to read about the beautiful rituals of this beautiful festival, Karva Chauth.

This function does not merely start on the day itself. It all begins a day before! All newly-married women and brides-to-be receive the traditional sargi from their in-laws’ house, prepared by the mother-in-law. The sargi includes earthen pots that contain food to be eaten in the morning, before starting the fast. It will give them the strength they require for the rest of the day.

This food has to be consumed in the morning, before sunrise. It includes fruits, mathri which is a salty fried snack, milk-based Indian sweets or mithai and dry fruits like kaju, kismis and badam.

The baya is a gift or a token of the mother-in-law’s appreciation for her daughter-in-law, who is fasting for her son. Baya generally includes money, clothes, jewellery, cosmetics, sindoor and sweets. After receiving the baya, women dress up in bright clothes and apply mehendi on their hands and feet, which symbolise a married Indian woman, in our culture. If the woman is newly-married and it is her first Karva Chauth, gifts are given to the boy’s side of the family, by the girl’s side. This can include jewellery, money, clothes, sweets and more.

Moreover, for newlyweds, the first Karva Chauth is the time when a special bond develops between the mother-in-law and the daughter-in-law. Some mothers-in-law allow their daughters-in-law to have tea or milk in the evening, after the evening puja. In this way, a mutual understanding and a token of respect is set early on.

Also Read: The Story Behind Why Karva Chauth Is Celebrated By Indian Women And Why They Dress Up For The Fast

#3. The puja & narration of the story

In the evening, women get together at someone’s household where the pooja is held. This area where the pooja will take place is decorated with a beautiful idol of Maa Parvati and kharia mitti or mud.

A few hours before the moon rises, the traditional story of Karva Chauth is narrated to all the married women. Legend says that many many years ago, a young woman named Veeravati broke her fast before spotting the moon as a result of which her husband died instantly.

Distraught, the woman prayed to Maa Parvati, beseeching her to bring her husband back to life. This was done only after the woman followed a religious cycle of seven Karva Chauths, after which her husband was restored to life.

After the narration of this story, a prayer is said for the purpose of the husband’s welfare and for marital bliss and harmony. Lastly, the women pass their thalis around in a circle or feris, as they chant their holy hymn.

#4. Breaking of the fast

When the moon rises in the sky, it is time to break the fast. Women begin lighting diyas and pour water into the karva or container, which is already on the thali. Placing a sieve on this traditional thali, the women go up to the terrace or anywhere from where they can clearly see the moon.

First, they view the moon through the sieve. Then, water is offered to the moon. After that, they look at their husbands through the same sieve. A prayer is said asking for the husband’s long life and then, the husband breaks his wife’s fast by feeding her a morsel of food or by making her drink a sip of water.

This is followed by a lavish and delicious meal. Sometimes, the husbands give their wives gifts too.

Karva Chauth is one of those festivals that is both selfless by nature as well as a great joy to celebrate. Isn’t this festival sweet and beautiful? Indian culture is really rich and steeped in values and customs.

Next Read: Fashion Hacks To Wear Your Wedding Lehenga Again This Karva Chauth, Giving It An All New Avatar