Mahhi Vij shared an adorable video of a lovely moment shared between little Tara and her brother, Rajveer. Scroll down to see the video!

Popular television actors, Jay Bhanushali and Mahhi Vij had embraced parenthood after a few years of marriage by adopting their caretakers’ kids, Khushi and Rajveer and had won hearts all over. Jay and Mahhi’s lives had filled with immense happiness in 2019 when their 'aankhon ka tara', little Tara had entered their lives. Since then, Mahhi and Jay are riding high on parenthood and little Tara is already a star on the social media. Her adorable pictures and videos go viral on the internet in the blink of an eye! (Recommended Read: Neil Nitin Mukesh's Little Munchkin, Nurvi Dances On 'Ban Than Chali Dekho', The Video is Unmissable)

Mahhi Vij keeps sharing glimpses of her cute goofballs, Khushi, Rajveer and Tara on her IG handle. The doting mommy revealed that her kids call her mother, dadi, instead of nani because her husband, Jay calls her mother, 'mummy'. Little Tara also has an official Instagram page which is managed by her mumma, Mahhi. Some days ago, we had seen a picture of Tara from her first haircut session on her IG handle and it was too cute! Although, it seemed Tara was not on-board with her new hairstyle as she could be spotted crying.

Mahhi Vij Slams A Troller Who Questions The Actress' Love For Her Adopted Kids, Khushi And Rajveer

Mahhi Vij Shares A Picture Of Her Cotton Ball, Tara Jay Bhanushali With Her Brother, Rajveer

Mahhi Vij And Jay Bhanushali Frame Impressions Of Kids, Tara, Khushi And Rajveer And It Is Beautiful

Mahhi Vij Preps For Her Adopted Son, Rajveer's Birthday Party, Shares A Sneak-Peak Of The Same

Mahhi Vij's Emotional Note For Adopted Daughter, Khushi On Her Birthday Proves She Is An Amazing Mom 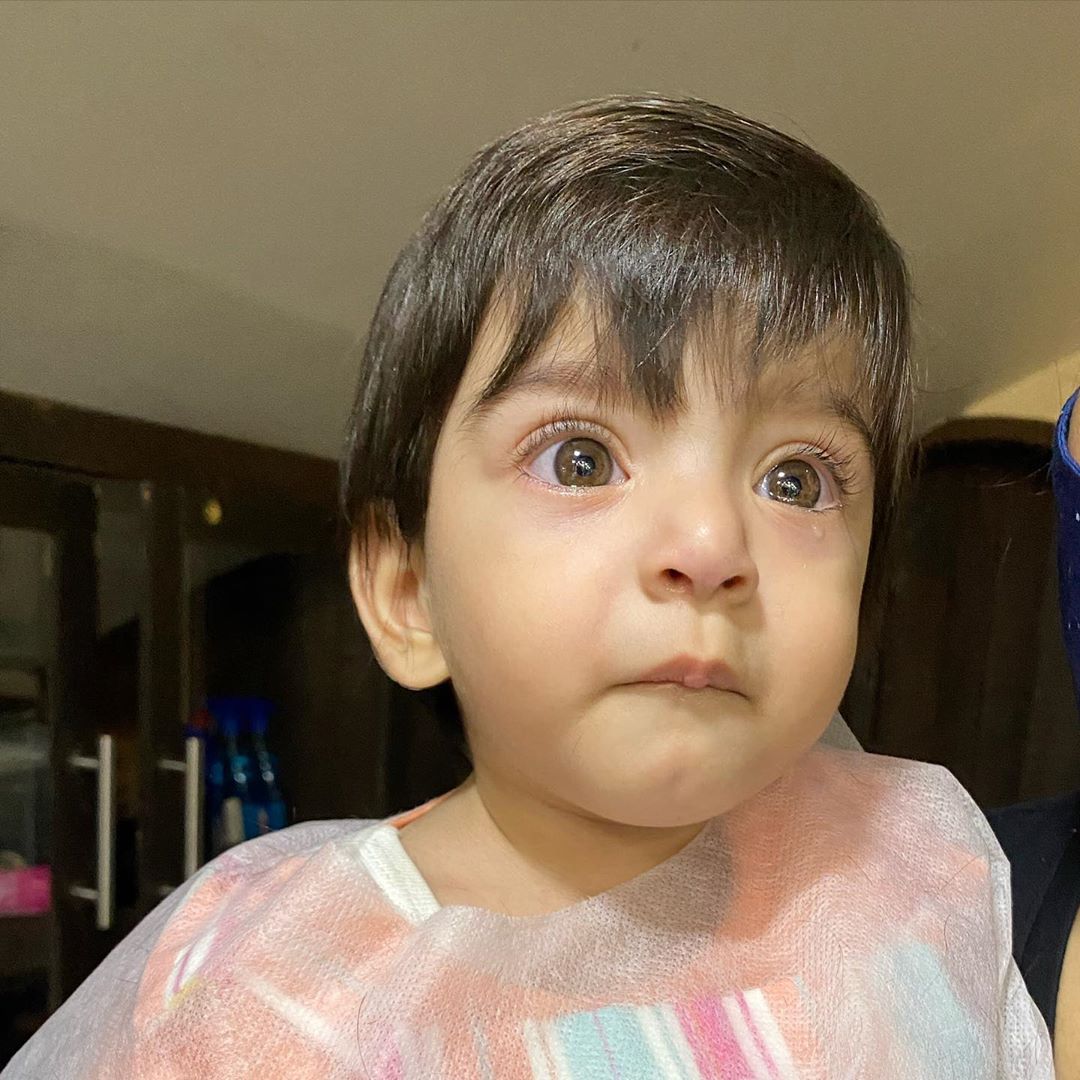 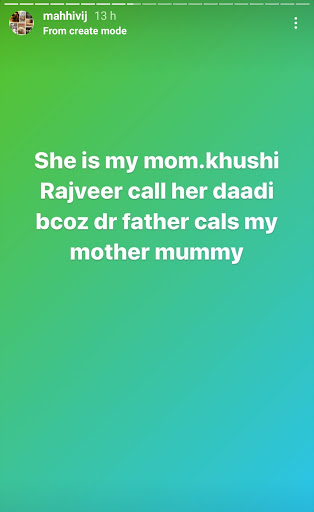 Mahhi Vij shared an adorable video of a lovely moment shared between little Tara and her brother, Rajveer on her IG stories. Rajveer can be seen smothering his baby sister, Tara with kisses before leaving, as Khushi and Rajveer are going to their hometown for a few months. Baby girl, Tara also reciprocated her brother's love by kissing him back. The other video featured little Khushi all set in protective gear, face mask, shield and cap before leaving the house, and Mahhi can be heard saying, Come sooon meri jaan." Mahhi also shared pictures biding her kids farewell. Check out the videos and pictures below: 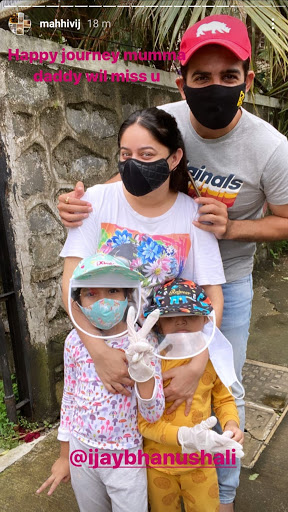 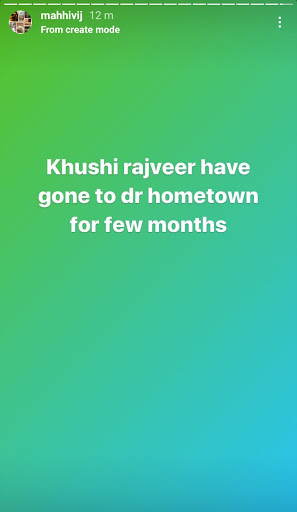 Jay and Mahhi had celebrated their daughter, Tara's first Janmashtami this year and the pictures of baby Tara in Krishna ji's avatar had broken the internet! Jay had shared pictures of his baby girl, Tara dressed as Lord Krishna. Tara had looked adorable in a yellow ensemble with bansi in one hand and mukut on her head. Alongside it, Jay had written, "My little Kanha you remind me of all the positivity, of all the innocence, of all the mischief and of all the love that exists in this world! For us, you are our greatest blessing from Krishna. Wishing all of you a very very Happy Janmasthami! Bring out the fun of Kanha and live life with the best of hope, the best of intent and most of all the utmost of love and happiness!" (Also Read: Divyanka Tripathi And Vivek Dahiya Dance Like No One's Watching Before Eco-Friendly Ganpati Visarjan) Baby Tara's first Ganesh Chaturthi was also quite special, as taking to her IG stories, the doting mommy, Mahhi Vij had shared how her kids had made their Gannu bhaiya from clay. In the first video, Khushi and Rajveer were seen arranging things to start with the process of making the Ganesha statue. In the second video, we could see Khushi and Rajveer working with the clay. In the third video, Khushi could be seen talking about making the Ganesha on her own with brother, Rajveer and how their mommy, Mahhi had helped them. And in the end, Rajveer had chanted ‘Ganpati Bappa Moriya’.

Earlier, in an interview with ETimes, Jay and Mahhi had reminisced their beautiful journey of pregnancy. Jay had talked about how his wife, Mahhi's pregnancy had changed him and had said, "I have realised one thing that aadmi kitna bhi tedha ho...when his wife is pregnant and delivers their baby, he changes. I have changed a lot and have become caring. What I have seen her going through in those 9 months of pregnancy my respect for her and all the women/mothers have increased. There was not a single checkup or sonography test of Mahhi during her pregnancy that I have missed. I accompanied her on all the appointments and I was there every time she needed me. It was a very stressful moment and the 9 months of the wife's pregnancy changes a lot in a man." (Don't Miss: Ankita Lokhande Has A Message For Sushant Singh Rajput's Nephew, Nirvanh On His First Day Of School)

We absolutely love baby Tara's cute antics! What about you? Mahhi Vij Slams A Troller Who Questions The Actress' Love For Her Adopted Kids, Khushi And Rajveer

Mahhi Vij Shares A Picture Of Her Cotton Ball, Tara Jay Bhanushali With Her Brother, Rajveer