A latest picture shared by Armaan Jain of his childhood has him cuddled in his father's arms, where he looks like a baby version of Taimur Ali Khan!

Kapoor khaandaan- the terms itself comes with its own set of royalty and weightage. Often believed to be the first-ever family to commercialise Indian cinema, you will not spot one member who isn’t famous or not doing well in their career. The roots of this family tree have gifted us with famous actors such as Raj Kapoor, the famous Kapoor sons, Randhir, Rajiv, Rishi, who in turn, have gifted us more stars. Speaking about the latest Kapoor addition who is hardly two-and-a-half-year-old but has already superseded the stardom of his parents, Kareena Kapoor Khan and Saif Ali Khan, Taimur Ali Khan is a sure shot way for everyone to drive away their blues and tell themselves, ‘only if I could cuddle this munchkin once!’ (Do Read: Chhavi Mittal Shifts To Her New House, Completes All Pending Deadlines On Her 41st Week Of Pregnancy)

Taimur Ali Khan is not just our favourite, but his star family and many Bollywood stars often drool over his cuteness and already want to go on a date with him. Speaking specifically about his family, Taimur is the apple of everyone’s eye. Remember those drool-worthy pictures that Taimur Ali Khan’s uncle, Armaan Jain had posted during Ganesh Chaturthi 2018? Decked in traditional, baby Tim looked adorable and so did his dapper uncle, Armaan. Sharing the pictures, Armaan wrote, “The adventures of Mama and Tim Tim” on the picture. Here’s the same below: 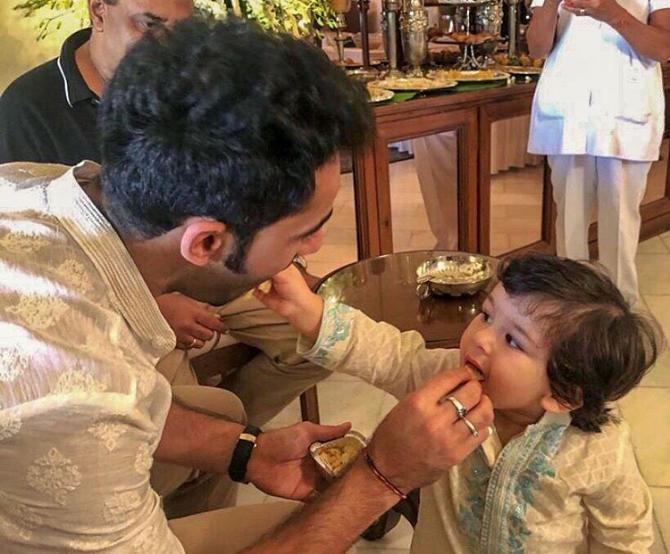 Armaan Jain is the son of Raj Kapoor’s daughter, Rima Jain and often keeps on sharing adorable pictures from his childhood with his fans. The latest one shared by Armaan has him cuddled in his father’s arms and looks like a childhood version of Taimur Ali Khan! Netizens immediately noticed the uncanny resemblance of Taimur and Armaan and posted comments such as “Sir Tim is a mini form” and “Tim Tim looks like your younger version”. Here are the pictures and the screenshots for you to see: Coming back to Taimur Ali Khan and speaking about stars obsessing over him, mamu Ranbir Kapoor too, is ‘obsessed’ over this little prince. The Sanju star had revealed the same in an interview, “To be honest, I stalk his pictures because I am also obsessed. Because when you see him it just warms your heart. And when he has his haircut or how he walks. I am a Taimur fan.” He had further added, “I have had the opportunity and the good fortune to hold him and it felt quite surreal. It felt like holding royalty.” (Don't Miss! Is Deepika Padukone Pregnant? Fans Speculate After She Flaunts A Slight Bump At MET Gala After-Party) 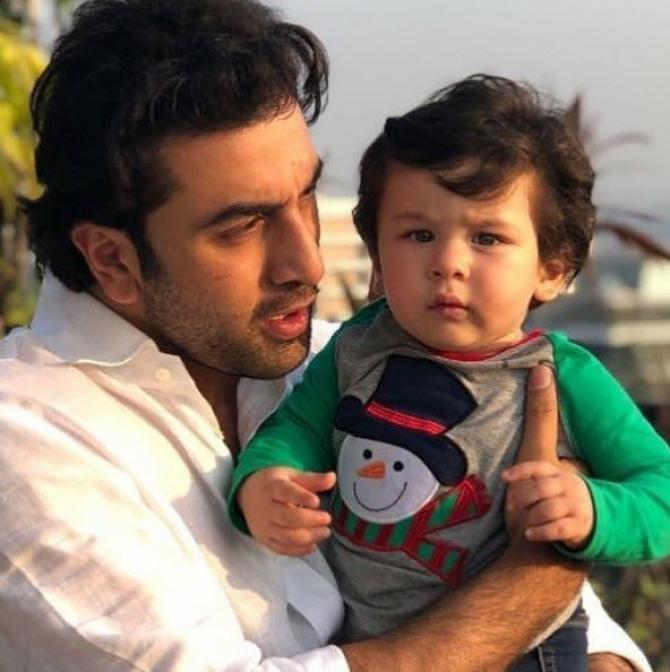 In an interview with the Mumbai Mirror, Taimur Ali Khan’s gorgeous momma, Kareena Kapoor Khan, spoke about nation's obsessiveness with her son, and the fan-frenzy which has gone to another level as markets are now selling Taimur-inspired toys! She revealed, “Taimur can’t run away from his popularity and neither can his parents. When I saw the doll, I wondered what was I supposed to say. But Saif pointed out that it is because people love him so much and such things are a blessing for him. There is so much genuine warmth for our son that it’s bad to stop people from clicking his pictures or making his dolls. But, they should understand that he is a two-year-old child and needs a normal life. Both Saif and I are struggling to give him that and will continue to do so without telling the media to back off, no matter how annoying it gets after a point. It’s tough on him as it’s on Saif and me.”

Every new update about Taimur Ali Khan fills our heart with joy and in a recent interaction with Rajeev Masand, Kareena Kapoor Khan had revealed that baby Tim has learnt a few words and what he tells his momma! The doting mommy had shared, “He's a terror, he's very naughty, he's exactly like his father. Now he's going through this phase where everything is 'Mama don't laugh, Mama don't cough, anything you're doing Mama don't do this.' Because we are like Taimur don't do that, so he's picking up and telling us." Kareena Kapoor Khan had also revealed what hubby, Saif Ali Khan feels about Taimur Ali Khan and her, as a mother, “According to Saif, I spoil him silly. It's like you don't know how to discipline him. Obviously, Saif is like 'don't do this and you have to do that.' But he has more experience. And he's doing a wonderful job because he's giving so much time to Taimur, and just the way he is. But I'm a mother and I want to always bite his bum and kiss him and cuddle him. Saif's like you kiss him and cuddle him too much, but Taimur I'm going to do that till I don't know when." (Also Read: Angad Bedi Shares The Feeling Of Every Husband When His Wife Goes To Her Mom [Video])

Kareena Kapoor Khan also had a wonderful answer to what ‘motherhood’ means to her and added, “I can't explain it. There's something that just clicked. Everyone says that motherhood is the most beautiful thing, but it's not a thing, I don't think it's an experience. it's an emotion. When I'm with him, there's nothing else around me. Anything can happen, but there's nothing more important."