Taimur Ali Khan is the most papped Bollywood celeb kid, and it wouldn't be wrong to call him a celebrity who is giving A-listers a run for their stardom. When his cousin sister, Sara Ali Khan recently told Filmfare that Taimur is the biggest celebrity in the house, we couldn't have agreed more. She was quoted as saying, "Yes, hands down. He walks out of the house and it makes the news. While we have to work hard for it." (You May Like: Kunal Jaisingh's Wife, Bharati Is 'Brave To Marry Him', Wishes Her With An Adorable Birthday Message)

Every pic of Taimur goes viral on social media, and it's Republic Day today on January 26, 2019. India is celebrating its 70th year of accepting its constitution and guess what? Taimur Ali Khan didn't want to lag behind today. Yes, Taimur with his star parents, Saif Ali Khan and Kareena Kapoor Khan is celebrating the Republic Day, and the pics of them hoisting the national flag in their Mumbai apartment have gone viral. 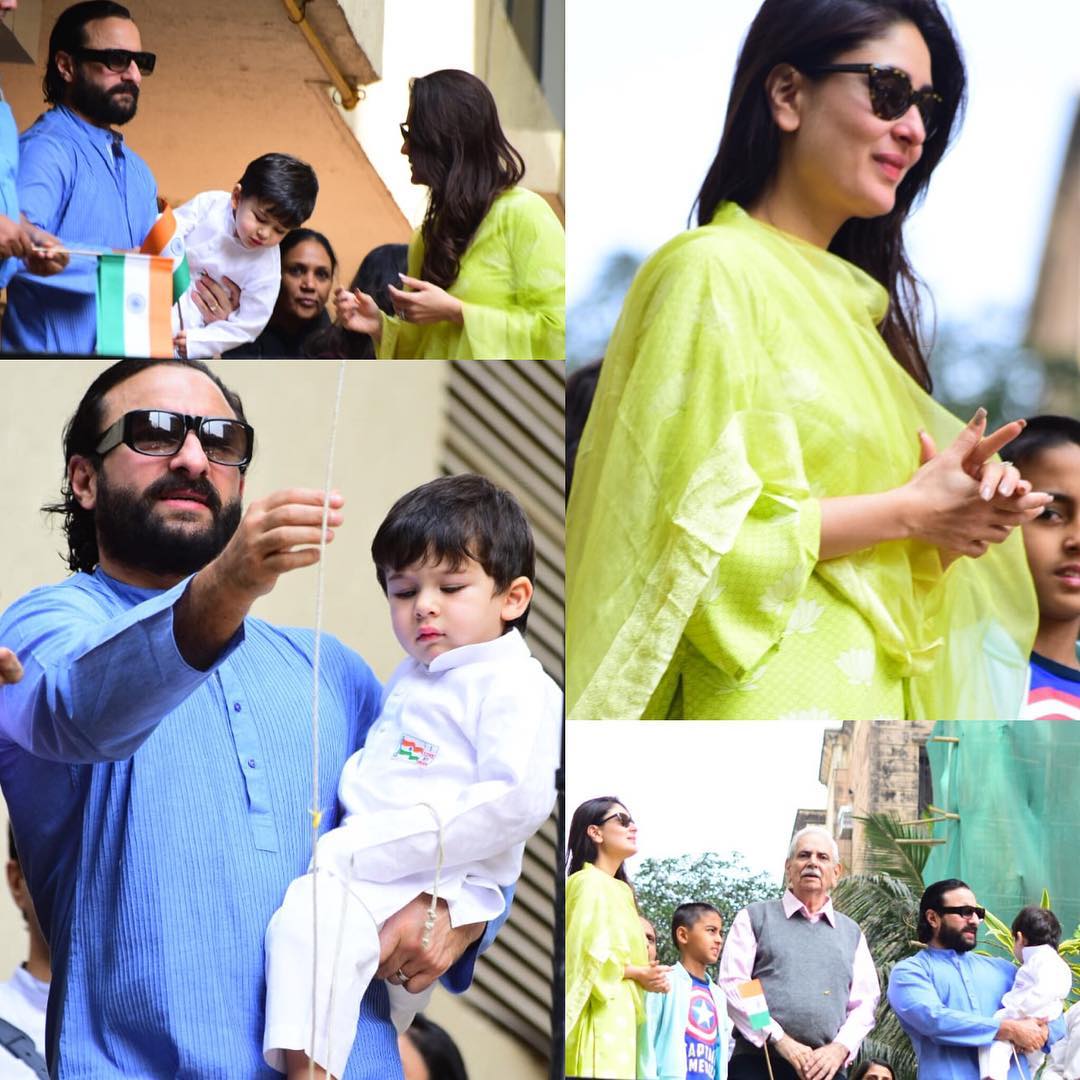 While Kareena looked exquisite in her green salwar suit, papa Saif radiated a traditional touch in his blue kurta, and stationed on his arms, Taimur rocked his Republic Day look in white kurta pyjama. Take a look at how Taimur Ali Khan celebrates Republic Day:

Taimur's every pic and move is monitored by the media and paparazzi. On this, mommy Kareena recently said in an interview, "Now I do not like the fact that Taimur’s every move is monitored… and people even talking about his hairstyle and all… I do not know how to control it now. Having said that I think he is becoming more familiar with the camera now, he looks right into the camera." Kareena Kapoor, in another interview, earlier shared how difficult or easy it was to go back to work post Taimur was born, and how paparazzi exploded around him. She had retorted, "I had support from my family. I had a lot of help. I had support from my sister (Karisma Kapoor) and of course most importantly, Saif. He comes from a family where his mother was working, his sister is working. It was easy for him to understand that I would take Taimur with me if I had to for a shoot. Absolutely 100 marks to Anil Kapoor and Rhea for being such fantastic producers. Taimur was so well looked after. I’ll always consider them as family. I couldn’t have asked for a better film to do after Taimur. And Taimur, of course, settled so beautifully in Delhi while I shot. He’s a happy trooper. Touchwood!" (Also Read: Unseen Pictures From Priyanka Chopra’s Chooda And Nick Jonas’ Haldi Ceremonies Are So Dreamy) 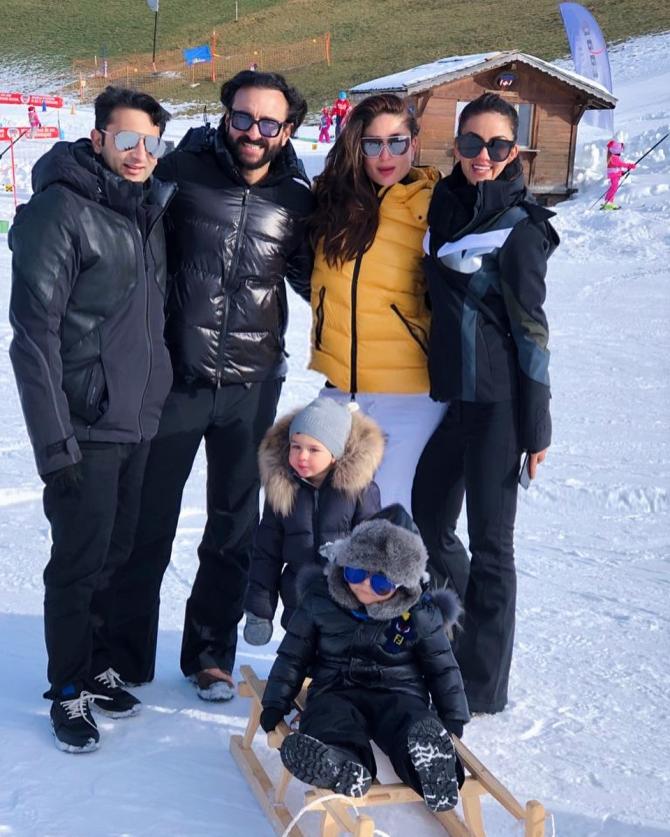 Saif Ali Khan recently shared in an interview as to how does it feel to travel with Taimur. He said, "Despite having the idea of trying different things, we’ve ended up (and my wife is quite annoyed about this) going to the same places and doing the same things every year—London in summer, Gstaad in winter, with some parts of India, like Rajasthan and Pataudi, in between. We would have liked to go to more places in Italy and France—and we will. But you know, there is also something comforting about going to the same places, because the people know you and the hotel feels like home. With Taimur, we also end up travelling with a bit of an entourage. We never travelled light, but after Taimur, we travel even heavier." 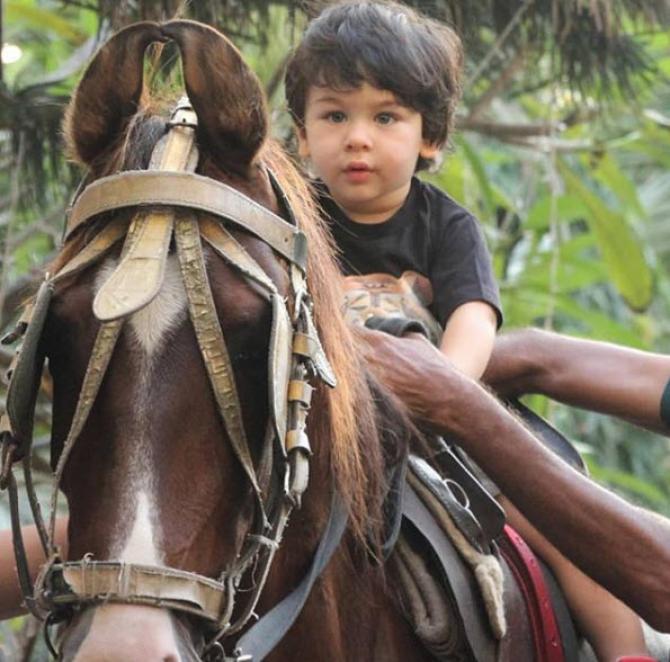 Kareena Kapoor, along the similar lines, was quoted as saying, "Well, I’m experiencing motherhood for the first time, so everything with Taimur is a first. Travelling with him is especially new and exciting—even if we’re going to a place I’ve been to before, taking him there makes it so different. I loved the Maldives holiday, loved showing him all these new things and places, and seeing them with him." (Don't Miss: Alia Bhatt's Cousin And Mukesh Bhatt's Daughter, Sakshi Bhatt Gets Married, Pics Inside) Taimur Ali Khan celebrates Republic Day and the pics have made you drool over him more, right?