It all began when Kangana Ranaut's sister, Rangoli Chandel sharedÂ a story which said that Alia Bhatt and Soni Razdan are not eligible to vote in the upcoming 2019 Lok Sabha elections.

Speaking fearlessly is definitely important, but speaking wisely and well is the key. A cold-worded banter between celebrities might not come as a surprise to you, thanks to voicing platforms such as Twitter, but looks like this time, the Bhatt-Ranaut exchange of fuming words ran parallel for quite some mile. The Ranaut sisters, Kangana Ranaut and Rangoli Chandel have always spoken their mind out, whenever need arouse, for varied A-listers of the industry. And what looks like it, their latest target is the Bhatt mother-daughter duo, Alia Bhatt and her mother, Soni Razdan. (Do Read: Anant Ambani And Girlfriend Radhika Merchant Step Out In Casuals To Attend A Store Launch In Bandra)

However, there are multiple layers to this story, so tighten your seatbelt and get ready to step into this ‘adventurous voyage’! It all began when Kangana Ranaut’s sister, Rangoli Chandel (who is an active Twitterati), took to the social media platform and shared a story which said that Alia Bhatt and Soni Razdan are not eligible to vote in the upcoming 2019 Lok Sabha elections as they both hold British passports. Retweeting the article, Rangoli Chandel wrote, “These non Indians who are living off this land, using and abusing its people and its resources, lying about intolerance and spreading hatred, time to think about their agenda and not to get carried away with their provocations.”

Alia Bhatt Comments On Kangana Ranaut, Rangoli Chandel's Attack On Her Acting And Her Parents 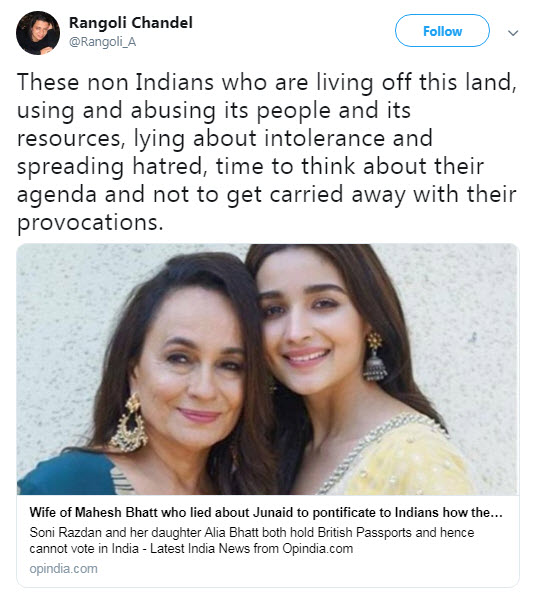 Kangana Ranaut, had quite a few times, taken a dig at Alia Bhatt and her beau, Ranbir Kapoor for various reasons. While the Gully Boy actress had handled it quite gracefully, this time, her mom, Soni Razdan was not in the mood to spare anyone. She lashed out at Kangana and her sister, Rangoli through a tweet, which she later went on to delete. Her tweet could be read as, “Mahesh Bhatt is the man who has given her a break … she goes on to attack his wife and daughter. Daughter over and over again. What is left to be said then about abusing and hatred I wonder. Apart from character of course. Agenda ? What’s hers … ?” 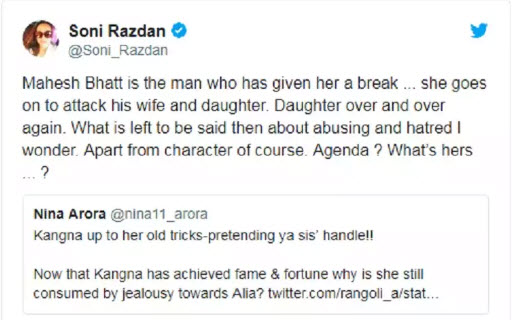 And bang came Rangoli Chandel’s series of tweets for Soni Razdan, “Dear Soni ji, Mahesh Bhatt never gave her a break, Anurag Basu did, Mahesh Bhatt ji works as a creative director in his brothers production house.... please note that he doesn’t own that production house, after Woh Lamhe when Kangana refused to do a film written by him called ‘Dhokha where he wanted her to play a suicide bomber he got so upset that he not only shouted at her in his office..... but later when she went for Woh Lamhe preview to a theatre he threw chappal on her, he didn’t allow her to see her own film, she cried whole night .... and she was just 19years old . @Soni_Razdan.” (Must Read: Sonam K Ahuja Recalls The Time When She Was Body-Shamed And People Would Taunt Her About Marriage)

But Soni Razdan kept her calm and chose not to spread hate messages anymore and her two tweets thereafter, indirectly giving out a much-required answer, wrote, “Urging people to vote against hate has nothing to do with citizenship and everything to do with being a human being. We are all human beings first and citizens of the world we live in. Secularism and democratic principles are values and it’s those that I stand for. #VoteOutHate.” Another fan who had lashed out at Soni ji, telling her, “Get lost British citizen ...u have no place in India to preach”, got this as a reply from her, “I do actually. My father is Indian. Lived in India since I was 3 months old. Pay taxes. Hold an Overseas Citizen of India card. If my hard earned income is good enough to be used to better this nation then I have a right to voice my opinions too. #VoteOutHate.” 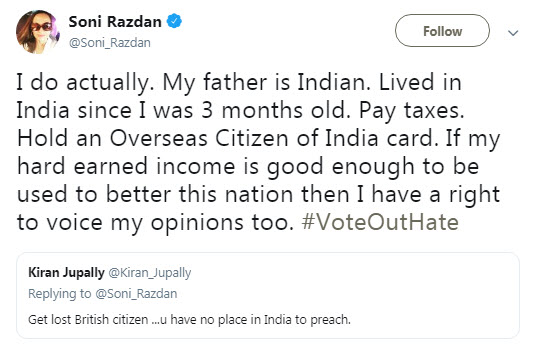 Amidst all the hate-spread, Alia Bhatt’s Highway co-star, Randeep Hooda took to Twitter and wrote a cryptic message of encouragement for her. The same could be read as, “Dearest @aliaa08 I’m so glad you are not letting the opinions of very occasional actors and chronic victims affect you and your work .. kudos to you for your continued efforts to outdo yourself.” To which, Alia retweeted the message and wrote, “Randy”, backed by multiple super-happy emojis.

But Randeep Hooda supporting Alia Bhatt did not go down well with Rangoli Chandel and she left no stone unturned to lash out at him in a series of tweets that could be read as, “Alia baby ko bachane ko nepotism gang ki khud ki himmat nahin toh tujhko aage kiya, I know during film Ungli what u did, kitna harass kiya tune Kangana ko aur kitna bada chatukar hai tu Karan Johar ka.... .magar phir bhi tera kuch nahin hua, at least people like Alia are successful because of chamchagiri, bhai tu to permanent failure hai @RandeepHooda.”

Twitteratis all over started posting their views and then came a moment when a netizen tweeted about Rangoli’s Twitter banter, “Kangna up to her old tricks-pretending ya sis’ handle!! Now that Kangna has achieved fame & fortune why is she still consumed by jealousy towards Alia?” And pat came Rangoli’s reply as she lashed out, “Of course Kangana is jealous of Alia’s super model looks and fashion sense, remarkable multiple national awards winning  acting skills along with superhuman action style, Her exceptional IQ and speeches along with refreshing writings, directorial skills whereas poor Kangana surviving because of one sugar daddy who she works for totally free of cost.” (Also Read: Throwback: When Rekha Indirectly Said Rumoured Flame, Amitabh Bachchan Makes Jaya Bachchan Insecure)

Ending her Twitter banter for the time being, Rangoli Chandel signed off as, “About Kangana taking over my account .... I wish some day, we can definitely do a live chat!!! But you guys cant even handle me she will toh set this place on fire.”

And that’s how, it all ended (probably)!

Alia Bhatt Comments On Kangana Ranaut, Rangoli Chandel's Attack On Her Acting And Her Parents