A baby is always a blessing for everyone in a family. And when the baby starts to pick habits from you, it gives immense happiness. Soha Ali Khan and her husband, Kunal Kemmu’s little munchkin, Inaaya Naumi Kemmu must be making her nani, Sharmila Tagore’s heart beam with pride. Inaaya twinned with her nani in bucket hats as she is enjoying with her in Pataudi Palace.

Also Read: Pregnant Neha Dhupia Sets Up Nursery For Second Baby With Daughter, Reveals She Is Due Anytime Now 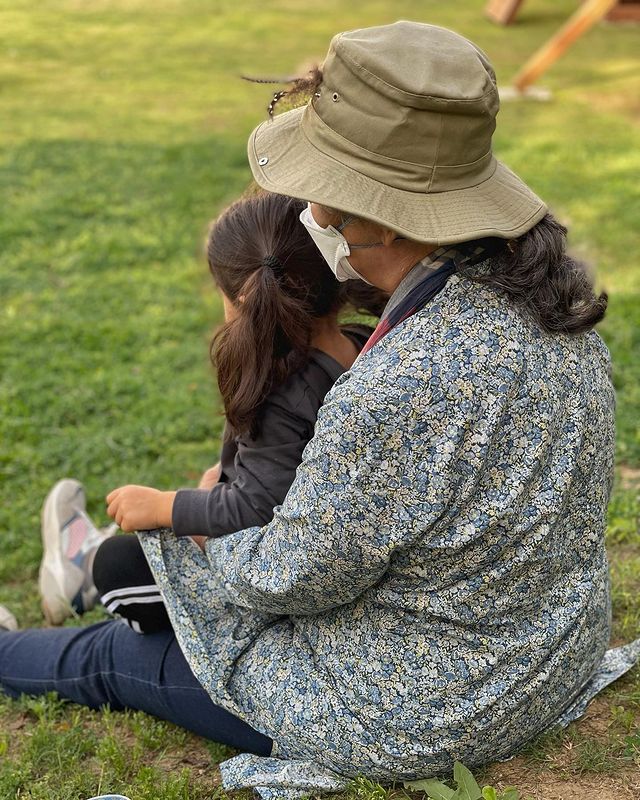 A few hours back, Soha Ali Khan shared a picture on her IG handle posing with her daughter, Inaaya Naumi Kemmu, her mother, Sharmila Tagore and a furball. In the picture, while Soha and Sharmila can be seen wearing ethnic outfits, whereas, Inaaya can be seen wearing a frock and playing with the furball. It was Inaaya and Sharmila’s twinning moment that made us go aww. Soha captioned the picture as “Three generations of women! (and a dog).” 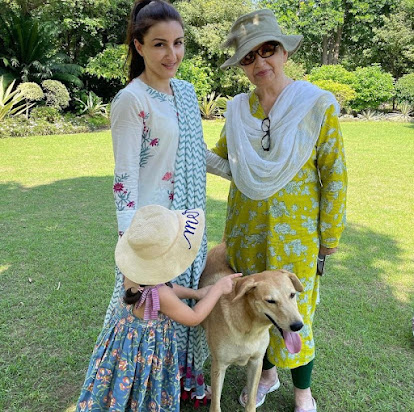 In March 2021, Soha Ali Khan had shared many glimpses of Inaaya Naumi Kemmu’s stay at the Pataudi Palace. She had taken to her IG handle and had shared an adorable picture of her daughter, Inaaya’s reading session with her nani, Sharmila Tagore. In the picture, Sharmila was seen reading a book to Inaaya while she was standing by her side, listening intently. Soha had also posted a candid picture of little Inaaya, enjoying a walk in the fields barefoot. Atop it, she had written, "Barefoot, muddy and free."

Recommended Read: Yami Gautam And Aditya Dhar Took Their Families With Them On Honeymoon, Gives A Hilarious Reason 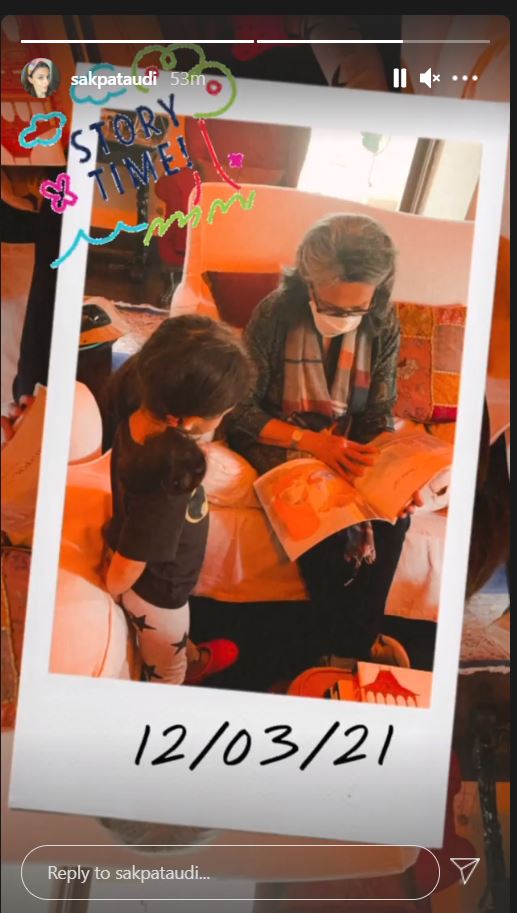 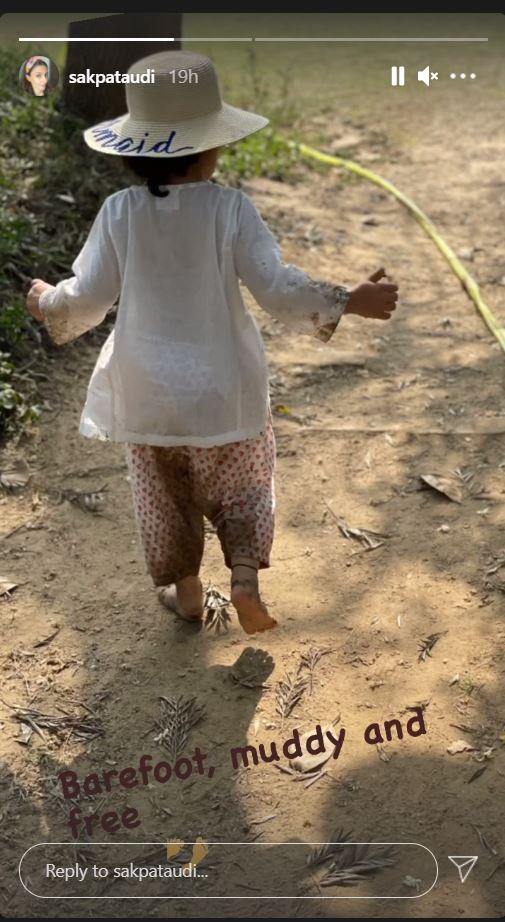 Inaaya’s stay at her nani, Sharmila Tagore’s palace had come to an end after almost a one-month-long stay. Soha had taken to her IG stories to share a sweet video of walking on the fields of Pataudi Palace as the family had said bye to it. In the video, Soha was walking while holding Inaaya’s hand as the mommy-daughter had twinned their hats and Kunal was walking beside Soha, holding the leash of their two dogs. Sharing the video, Soha had written, “Bye Bye Pataudi, we’ll see you anon...” However, it was Inaaya’s cuteness that had made us go aww as she had looked excited and a bit reluctant to leave her nani’s house.

Soha’s sister, Saba Ali Khan loves revisiting good old times, every now and then. A few months back, Saba had posted an adorable picture of her niece, Inaaya, admiring her nani, Sharmila Tagore's portrait of the poster of her film, Aradhana. It was indeed an unmissable sight, captured by one and only, Saba! Inaaya had looked cuteness personified in the picture, which Saba had captioned as "My photography Series Behind the camera is my forte. Love it. And been doing so for years!! Parents, siblings, kids. Moments in life ... Captured. #memoriesforlife #mondaymood." 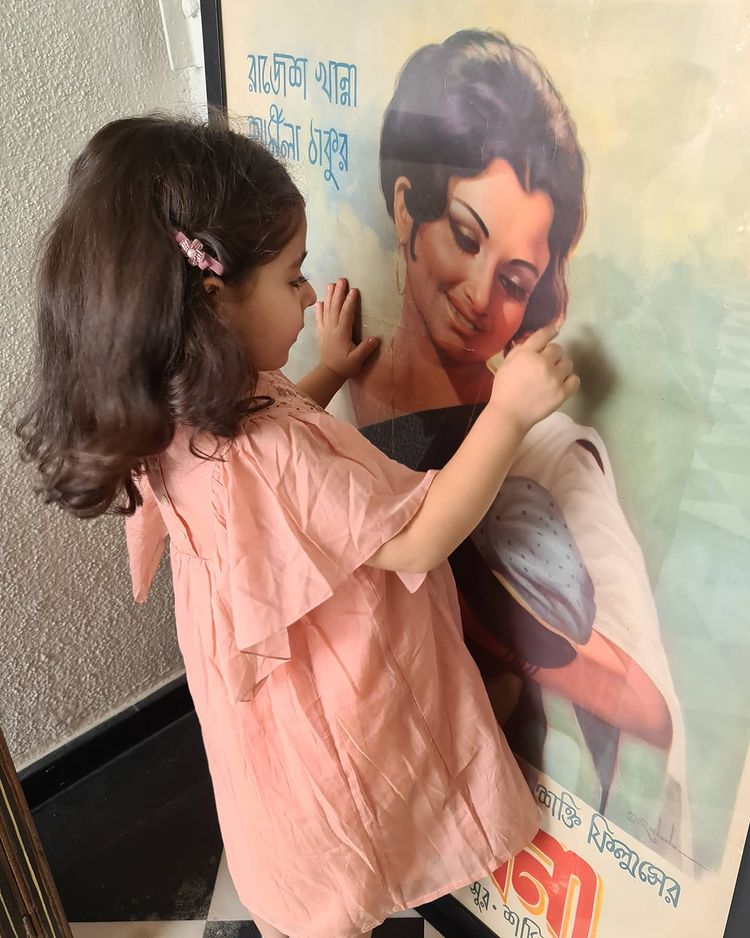 Soha Ali Khan had given birth to Inaaya Naumi Kemmu on September 29, 2017.