Bollywood couple, Soha Ali Khan and Kunal Kemmu's relationship is an inspiration for the millennials. The duo had met each other in 2009 when they had signed a film, Dhoondte Reh Jaaoge, and at that point of time, they didn't even think they would become friends. Kunal Kemmu and Soha Ali Khan have given this industry one of the cutest star kids. They were blessed with a cute baby girl on September 29, 2017. (Recommended Read: Priyanka Chopra Jonas Reveals Her Wedding Gown Gave Her A Neck Cramp That Still Hurts After 2 Years)

Two days later, the proud and elated parents had named their daughter, Inaaya. Since then, their Instagram handles are filled with Inaaya's adorable pictures and cute videos. Both Kunal and Soha try their best to spend as much time as possible with their little daughter. This time, it's the doting mommy, Soha, who posted a cute video with her daughter, Inaaya, in which she can be seen giving some much-needed values to her baby girl about puppy parenting. Scroll down to see it all! On February 17, 2021, Bollywood actress, Soha Ali Khan took to her Instagram handle and shared a beautiful video that features her adorable daughter, Inaaya Naumi Kemmu and some of their neighbours. In the video, the doting mommy can be seen holding a cute street puppy in her arms and caressing the little four-legged bundle of happiness with much love and care. We can also see Soha introducing the new member of their neighbourhood to her daughter, Inaaya and the adorable princess looked excited and cautious at the same time. The special moments in the video speaks a lot about the kind of mother, Soha is and the kind of values she's giving to her daughter. Along with the beautiful video, Soha requested people to adopt a puppy instead of buying one from the shop. Her note can be read as "Welcome Puri to the building! Thank you @sumitcan and @ravneet_vohra for bringing this bundle of joy into your home and into our lives. We love being able to spend some time with her #adoptdontshop #puppylove." (Don't Miss: Mira Kapoor Dances On 'Tunak Tunak Tun' At BFF's Wedding, Her Bridesmaid Look Costs Around Rs 3 Lakh)

For the uninitiated, Soha Ali Khan and her daughter, Inaaya Naumi Kemmu are dog lovers and never skip a chance to play with them. For instance, on October 13, 2020, Soha had taken to her Instagram stories and had posted a picture of her angel with a pooch. In the picture, we could see Inaaya, who was dressed in a casual ensemble, petting a cute dog. The little girl had looked utterly happy while showering her love on the pooch at a park. Soha had captioned the picture as "You're cute." After a few days, on October 15, 2020, Soha Ali Khan had taken to her IG stories and had shared a cute picture of her little doll, Inaaya Naumi Kemmu sitting on a bench, with a cutesy pug. While Inaaya was facing away from the camera, lost in her own world, the cute little Pug had stolen the show. Soha had written a quirky line atop the picture which could be read as "Dog day afternoon." Back in 2018, Soha had talked about raising Inaaya in a media interaction and had stated, "I think everyone keeps asking what my next project is. I think project Inaaya is taking up most of my time right now and quite happily so. I want Inaaya to be her own person. I would like her to have open communication with me. Things like integrity, trust, loyalty, being kind to others, are some of the things I would like to see in her. It shouldn't be that Inaaya remains only surrounded by love and positivity. She should also be a strong person, with the [sense of] security to withstand criticism and also be able to laugh. I think having a sense of humour is very important." (Also Read: Aishwarya Rai Bachchan Trolled For Treating Her Daughter, Aaradhya Bachchan Like A 3-Year-Old Kid) 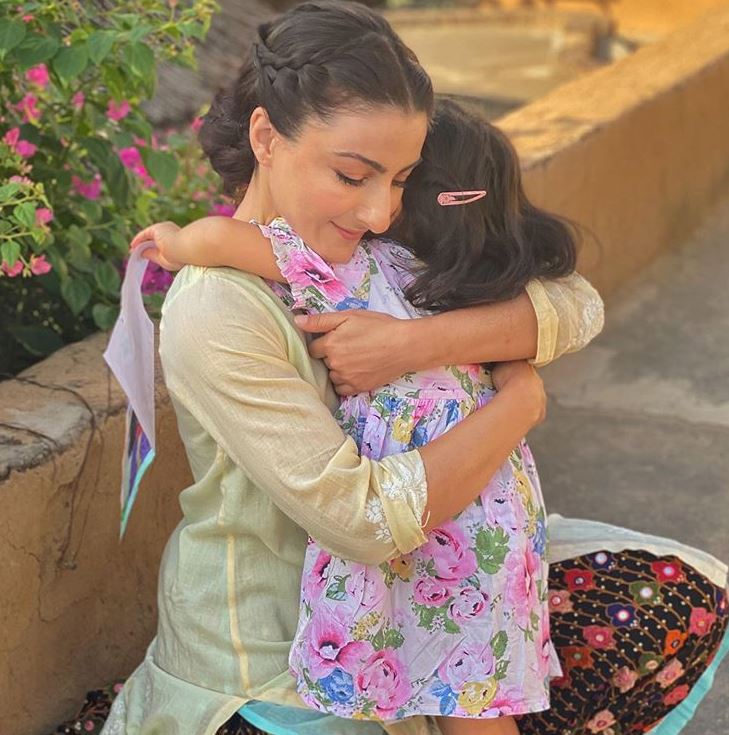 Did you like Soha and Inaaya's video with the little pup? Let us know!