Mothers can do anything when it comes to their kids! And television actress, Shweta Tiwari proves it right as she cuts her baby, Reyansh's hair. Scroll down to know more!

Motherhood is not an easy journey. Your life changes, the moment you find out your pregnancy test result is positive. You are always on your toes and there is no pause button to it. Things become even hard when you are a working mom as managing work and baby is a whole different experience. But thanks to multitasking women, now they can manage anything. And a perfect example of it is television actress, Shweta Tiwari. (Recommend Read: Quarantine Updates: Divyanka Tripathi Cooks Mouth-Watering Thai Food For Husband, Vivek Dahiya)

Since 2001, Shweta has been winning our hearts with her acting stint. She has been enjoying the title of India's 'favourite bahu'  over the years, and we have all applauded her courage (both professionally and personally). However, her personal life hasn't been a bed of roses. We still remember, when she had lodged an FIR (for domestic violence) against her first husband, Raja Chaudhary. And her decision gave many young girls courage to end their troubled marriage. Later, when we thought Shweta has finally found her 'happily ever after' with Abhinav Kohli, the rumours of trouble in their paradise made it to our gossip section and it was confirmed when she had lodged a complaint against him.

Currently, Shweta is acing her role as a single mom and looking after her daughter, Palak Tiwari and Reyansh. On April 7, 2020, Shweta gave us a glimpse of how she is handling her kids amidst the nationwide lockdown. She posted a couple of pictures on her Instagram handle, wherein, we can see her giving a nice haircut to her son, Reyansh. Alongside it, Shweta wrote, "Always be yourself, unless you can be a Barber. #nanhayatri #stayhome #haircut." Take a look at it below: 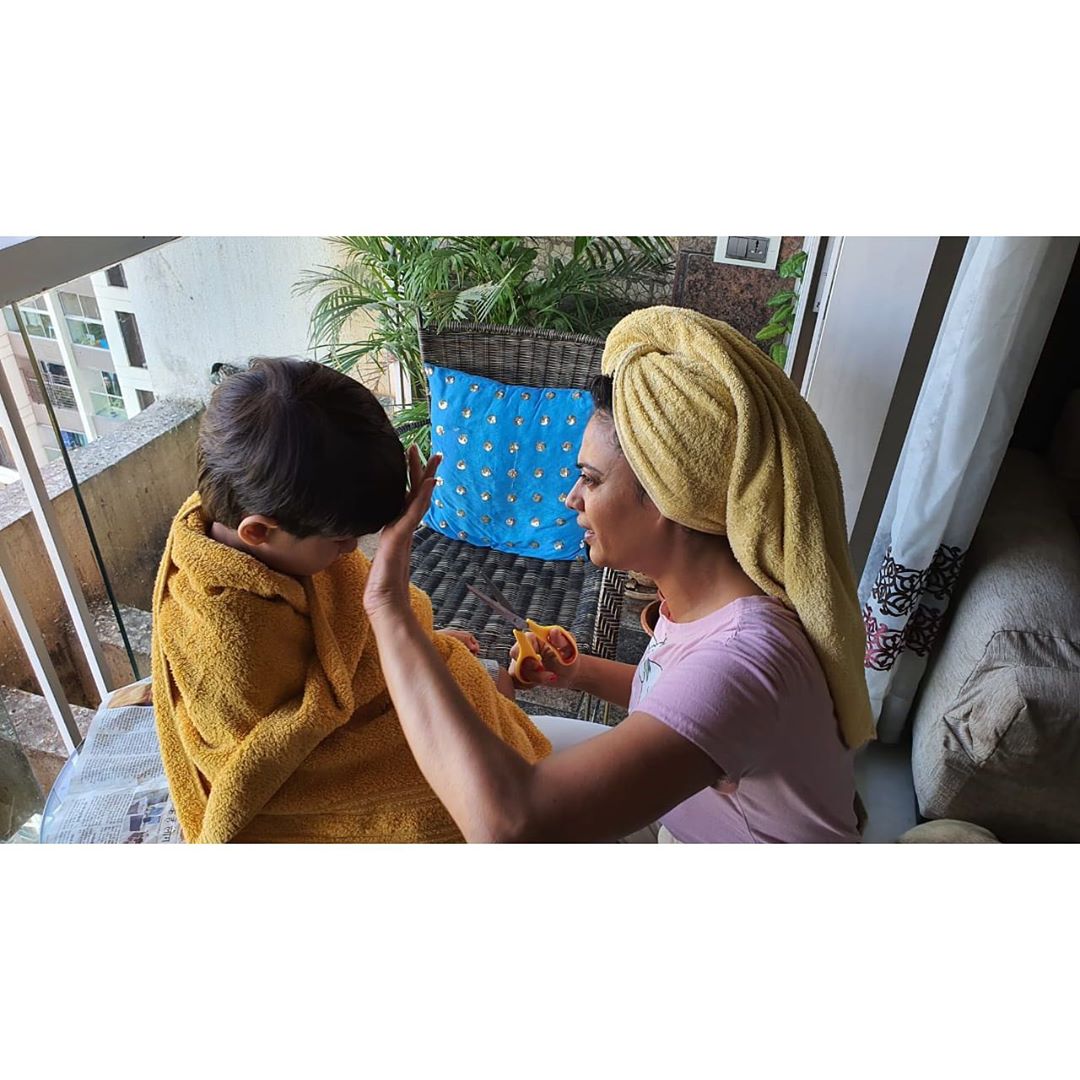 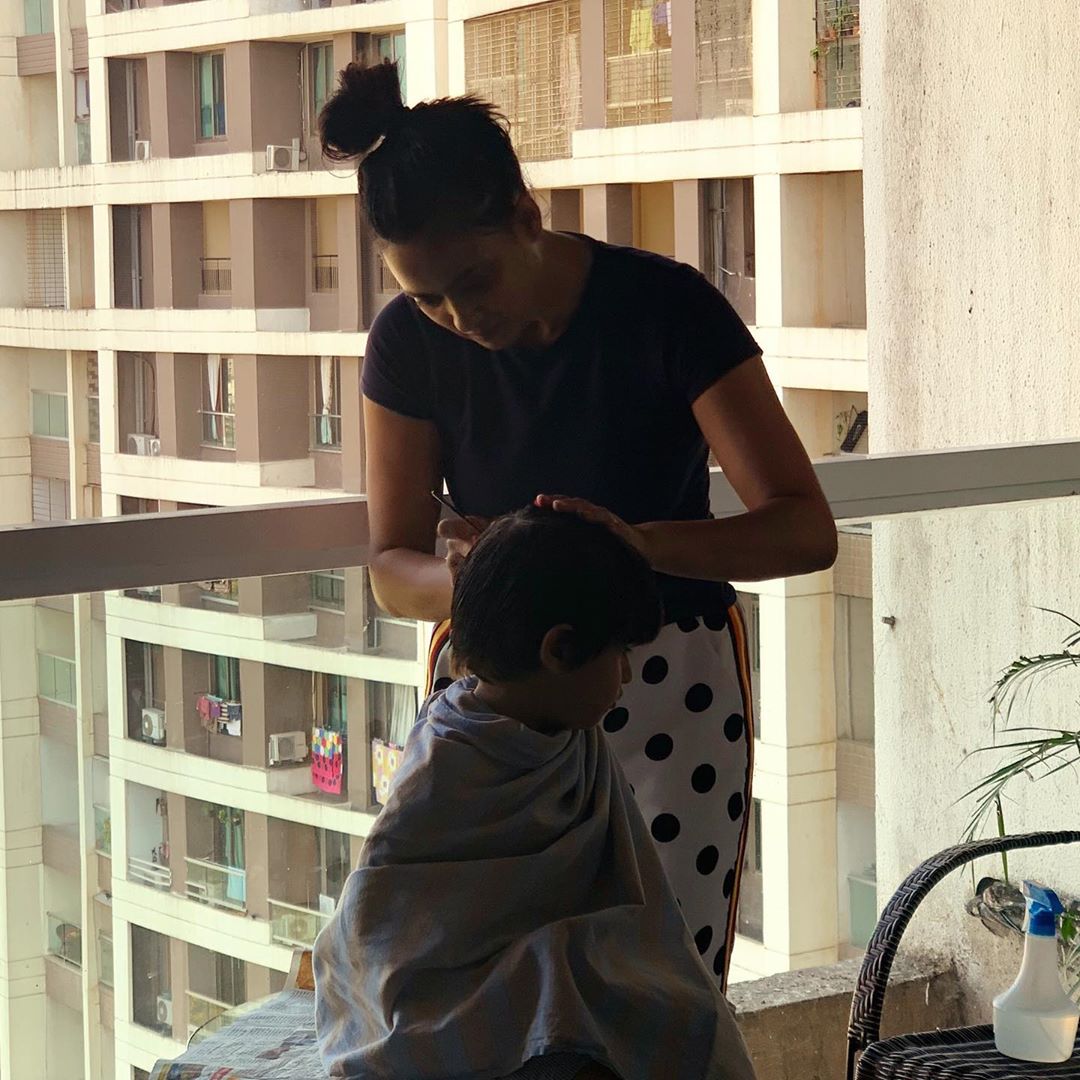 During a press conference for a comeback show, Mere Dad Ki Dulhan, Shweta was asked to give a message for women, who are facing domestic violence in their marriage. To which, the actress had stated that there are a lot of people who tell her, "Achha? Dobara bhi problem? Aisa ho nahi sakta. Aisa kyu nahi ho sakta? At least I have the guts that if I faced a problem again, I could speak up about my problems without any fear whatsoever. What others think of me is none of my concern. I will only do what is right for my child and my personal growth." (Also Read: Charu Asopa Sen Gives It Back To The Trollers Who Wrote Nasty Comments On Her Pictures With Hubby) For those who don't know, Shweta had tied the knot with Abhinav Kohli in the year 2013. But this year, their marriage had hit the rough patch as Shweta had lodged a police complaint against Abhinav and had accused him of domestic violence. And her daughter, Palak Tiwari (from her first marriage) had cleared the air with a long note that could be read as "Firstly, I would like to thank everyone who’s reached out to express their concern and support. Secondly, I would like to address and clarify a few things out of my own rectitude: The media does not have the facts and they never will. I, Palak Tiwari, was on multiple occasions a victim of domestic abuse NOT my mother, except for the day that the complaint was filed he hadn’t hit my mother." (Don't Miss: Smriti Khanna Reveals Her Due Date And How She's Spending Her Last Pregnancy Days With Hubby, Gautam)

Well, we love how Shweta is showing off her multitasking skills!