In your childhood, did you ever watch Cartoon Network's hit show, Richie Rich, wherein, the entire family stayed in a house where even the pillows were stuffed with cash, and not with cotton? That was a 2-D animation show and we never really thought that a family like that existed in reality, until we grew up and heard about billionaire, Mukesh Ambani! While we do know that the business magnate and his family stay in a 27-storey building, named Antilia in Mumbai (which is considered as the second most luxurious property in the world), but what we don't really know is if the Ambanis actually stuff their pillows with cash (just joking, silly)! (Do Read: Saina Nehwal And Parupalli Kashyap Are Now A Married Couple, She Calls It The Best Match Of Her Life)

Mukesh's beautiful daughter, Isha Ambani got married to her childhood friend and now hubby, Anand Piramal in a big fat Gujarati wedding on December 12, 2018. The couple had their pre-wedding festivities in Udaipur and their wedding in Mumbai. Who's who of the glamour world and other walks of life were the invitees of the event and all we could do was sit back in amazement and keep refreshing our social media feeds. And today (December 14, 2018), the Ambanis are hosting a reception for the people belonging to the glamour world in Mumbai's Jio Garden and trust us, these are the kind of get-togethers that we like! Take a dig and Isha and Anand's first look from their reception:

Don't they look beautiful? And now, the next and most sought members from the Ambani family are Isha's brother and bhabhi, Akash Ambani and his fiancee, Shloka Mehta. Donned in red and pink and from head-to-toe and her man, keeping it smoking hot in red and white, Akash and Shloka's twinning spree gave us an example of how perfect couples action! take a look at their first look:

Isha's aunt, Tina Ambani was also spotted keeping it gorgeous in an ivory saree, which she teamed with a green heavy neckpiece. The second Ambani bahu was spotted holding the hand of her son, Jai Anmol Ambani. Isha's granny, Kokilaben was also spotted, wearing a pink saree and looking beautiful as she posed with her daughter-in-law, Nita Ambani and youngest son, Anil Ambani. Take a look at their pictures here:

Coming back to Isha's pre-wedding and wedding festivities, a kanyadaan ceremony is considered one of the most emotional moments for a father and if the father of a bride involves someone out of the family in this, consider that person one of the closest to their family and so are the Bachchan’s to the Ambanis. Hence, when Mukesh ji was doing Isha’s kanyadaan, do you know who was doing the addressal speech for the guests? It was none other than the Shahenshah of Bollywood, Amitabh Bachchan! While Amit ji was reading out the speech in his charismatic voice, Mukesh, Nita and Isha had gone all emotional! Checkout the video here:

One of the most fun ritual in a wedding ceremony is a jaimala ceremony. Who would put the garland on whom, with their cousins and relatives ensuring that their side of the soon-to-be wed wins, is the most fun! Isha and Anand’s jaimala ceremony was equally fun too! Everyone was all smiles when both Isha and Anand were trying to put the garland around one another, but ultimately, it was Anand who went away with ‘his trophy’ (we bet you know what we mean!). Checkout a video of the same: (Must Read: Ginni Chatrath's Post-Wedding Look As Mrs Sharma, Looks Gorgeous In A Unique Mangalsutra)

And why wouldn’t it cost so much? The Ambanis have ensured that there is no fall-back on the mehmaano ki khaatirdaari! To give you all a flashback of all the extravaganza that the Ambanis did, close to 40 chartered flights had been scheduled for its availability for the wedding. Apart from the flights, the Ambanis and Piramals had booked all the five-star hotels of the city (Udaipur for the pre-wedding) and over a thousand luxurious cars (Jaguars, Porches, Mercedes, Audis and BMWs) were made available at their guest's disposal! After the pre-wedding festivities, the entire troupe of families had flown back to Mumbai, where their wedding is all set to take place at the Ambani household in Antilia today, on December 12, 2018. 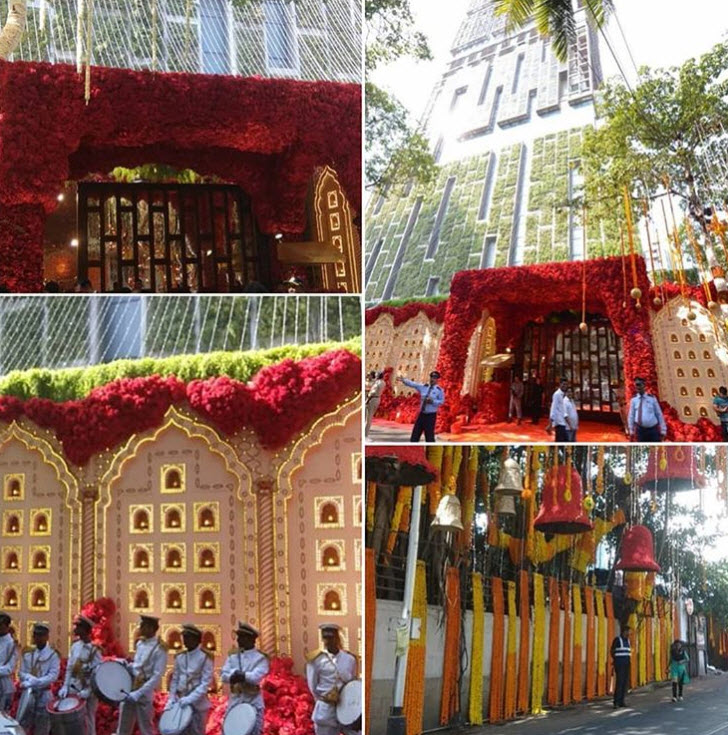 Coming back to wedding expenditure, the Ambanis had hosted an ‘Anna Seva’ from December 07-10, 2018, wherein they had been feeding 5100 people, three times a day. Apart from this, they had also set up a Swadesh Bazaar (an initiative of the Reliance Foundation), which had showcased “108 traditional Indian Crafts and art forms from all different regions of the country for the national and international guests”, thus keeping Indian art crafts alive. Amazing, isn’t it? (Read On! Alia Bhatt Felt Shy When Daddy Mahesh Bhatt Said That BF Ranbir Kapoor Is A 'Great Guy For Her') Shloka and Akash, you look drop-dead gorgeous and Isha and Anand, we wish you a lifetime of eternity and happiness!