Shikha Singh is enjoying every moment of her motherhood journey. On September 7, 2020, the doting mommy shared adorable pictures with her baby girl, Alayna.

When a child arrives, a couple’s life takes a complete U-turn. They start taking care of each and everything, and the child adds colour to their life. From taking turns for diaper duties to supporting each other in the process of raising the little one, the phase of parenthood brings in a lot of fun. Every moment spent with their little goofball becomes magical, and the newbie parents record every special moment of their life. Television actress, Shikha Singh and her hubby, Karan Shah are cherishing all these lovely moments with their baby girl, Alayna Singh Shah. (Also Read: Shahid Kapoor Pens An Adorable Birthday Wish For His 'Love', Mira Rajput, Feels Blessed To Have Her)

Shikha Singh is known for her performances in shows like Uttaran, Na Aana Is Des Laado, Phulwa, Sasural Simar Ka and Kumkum Bhagya. In 2016, Shikha had married her pilot boyfriend, Karan Shah. And after four years of marital bliss, on June 16, 2020, Shikha and Karan had gotten blessed with a baby girl, whom they have lovingly named Alayna. The doting parents never miss a chance to share beautiful pictures of their baby girl.

Shikha Singh Shows A Glimpse Of Alayna Playing With Her Daddy, Shares How She Blessed Their Lives

Shikha Singh Expresses Her Excitement When Her Baby, Alayna Sits On Her Own, Shares A Cute Picture On September 7, 2020, Shikha took to her IG handle and shared adorable pictures where baby Alayna was seen posing with Shikha and Karan and their pooch, Goku. Dressed in a blue onesie with cute little mittens, Alayna looked like a cotton ball wrapped in her mommy’s arms. Along with the pictures, Shikha wrote a note expressing her feelings of being blessed as she enjoys every moment with her baby girl. Her note can be read as “How tiny u were & u keep growing every single day! Oh Baby Al, take your time to grow up & thank you for letting us enjoy these moments with u.” 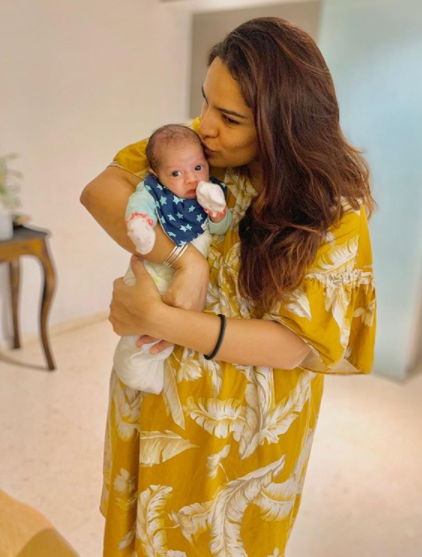 Few minutes back, Shikha gave a glimpse of baby Alayna all set to take her bath. The doting mommy clicked a selfie with hubby, Karan and their little munchkin. Along with the selfie, Shikha revealed that her daughter loves water and wrote, “Thank god she loves water. And thank god he still loves my tantrums.” (Also Read: Charu Asopa Shares A Steamy PDA Video With Hubby, Rajeev Sen Post Uniting With Him After Months) 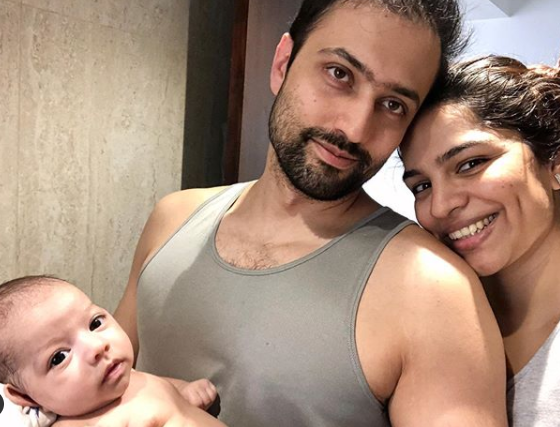 On September 6, 2020, Shikha had shared a collage of pictures with Karan and Alayna. Along with the collage, she had written how her angel had created magic with her smile. Her note could be read as “Dear Al, u make it look so easy. Like nothing happened the previous day or night. Like everything is sailing smoothly. Like u didn’t make us run for our lives when u screamed. Like we all slept well. Like let’s bring it on today too. Actually yeah that’s true. U do all that cos u have that magic in you & just keep using it on us to make our days & nights better. Our lives better. U make everything awesome with your smiles & lets keep it that way.” On August 18, 2020, when Alayna had completed two months, Shikha had taken to her IG handle and had shared an adorable picture of Alayna wherein the doting mommy, Shikha was seen admiring the little princess. Along with the picture, Shikha had written, “The way u look at me makes me wonder, what did I do to have you in my life. U are heavenly, angelic, dramatic & somewhat forever hungry. But I still love every bit of you & will always keep on loving you till my last breath & beyond.” Posting the same picture on baby Alayna’s IG page, Shikha had written, “Everyone keeps asking “Who’s your mommy” Well folks, she’s my mommy.” In an interview with Pinkvilla, Shikha had opened up on the new phase of her life and had stated that nothing has changed. She had revealed that apart from being deprived of sleep because of the baby’s schedule, not much has changed since Alayna’s arrival. She had also revealed the meaning of her daughter’s name and had stated that Alayna has different meanings and had said it means dear child, beautiful and a ray of hope. (Also Read: Rhea Kapoor Reminisces 'First Love' Memories With Beau Karan Boolani On Sets Of Her First Film Aisha) Isn’t Shikha and Karan’s baby girl adorable? What do you think? Let us know.

Shikha Singh Posts A Bold Picture, Receives Backlash From Netizens As They Did Not Expect It Shikha Singh, who had gathered a lot of appreciation for playing the role of 'Aaliyah' in the television show, Kumkum Bhagya, is currently on a break from the show after embracing motherhood and welcoming her baby girl, Alayna. However, her fans are eagerly waiting for her to make a comeback

Shikha Singh Shows A Glimpse Of Alayna Playing With Her Daddy, Shares How She Blessed Their Lives

Shikha Singh Expresses Her Excitement When Her Baby, Alayna Sits On Her Own, Shares A Cute Picture