The bride had looked breathtakingly gorgeous in a Sabyasachi lehenga adorned with minute detailing of 'Phulkari' design in silk floss thread and 'zardosi' border.

There used to be a time when we also dressed ourselves as a bride, and played Ghar-Ghar with our sahelis. The shaadi concept begins from then, and in the growing years, every wedding gives inspiration and every bride-to-be used to jot down all those trends till their D-Day comes. Over the years, we have seen many brides who changed the fashion game and came with hatke wedding couture. Some of them wore traditional old gharara mixing with current fashion. Some even styled their minimalistic ensembles with minimalistic jewellery and makeup. At the same time, some of them came out with exceptionally embellished heavy lehenga and jewellery for their wedding day.

In all of them, the designer who has been creative enough to make every bride-to-be’s dream come true is none other than Sabyasachi Mukherjee. Whether through the lehengas, sarees, jewellery, or makeup, the ace designer and his team of craftsmen are full of ideas that blow our minds for the best. One such bride, who had opted for a fairytale wedding couture from Sabyasachi Mukherjee's collection, was Ginni Malik. Read on to know more as we decode her wedding look. 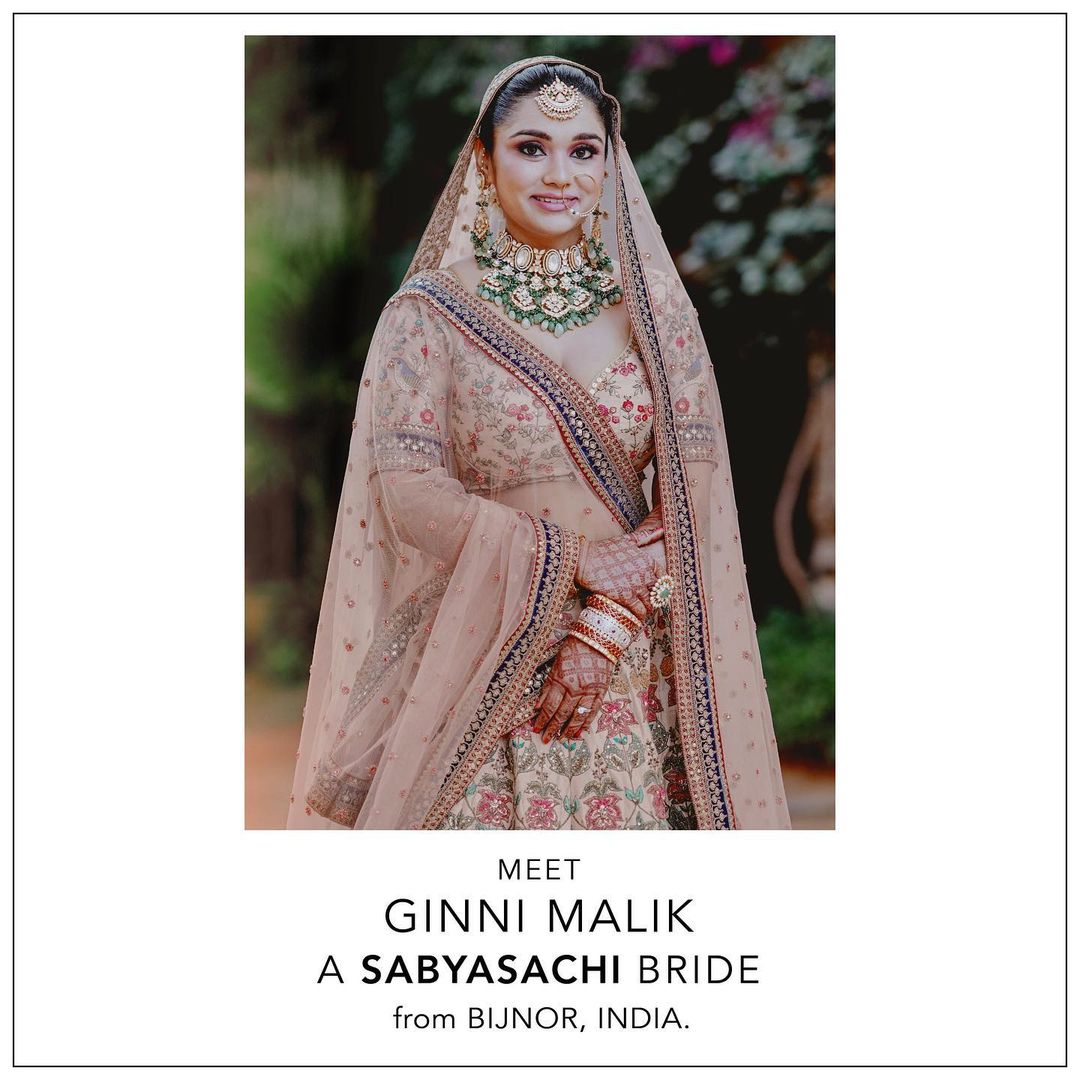 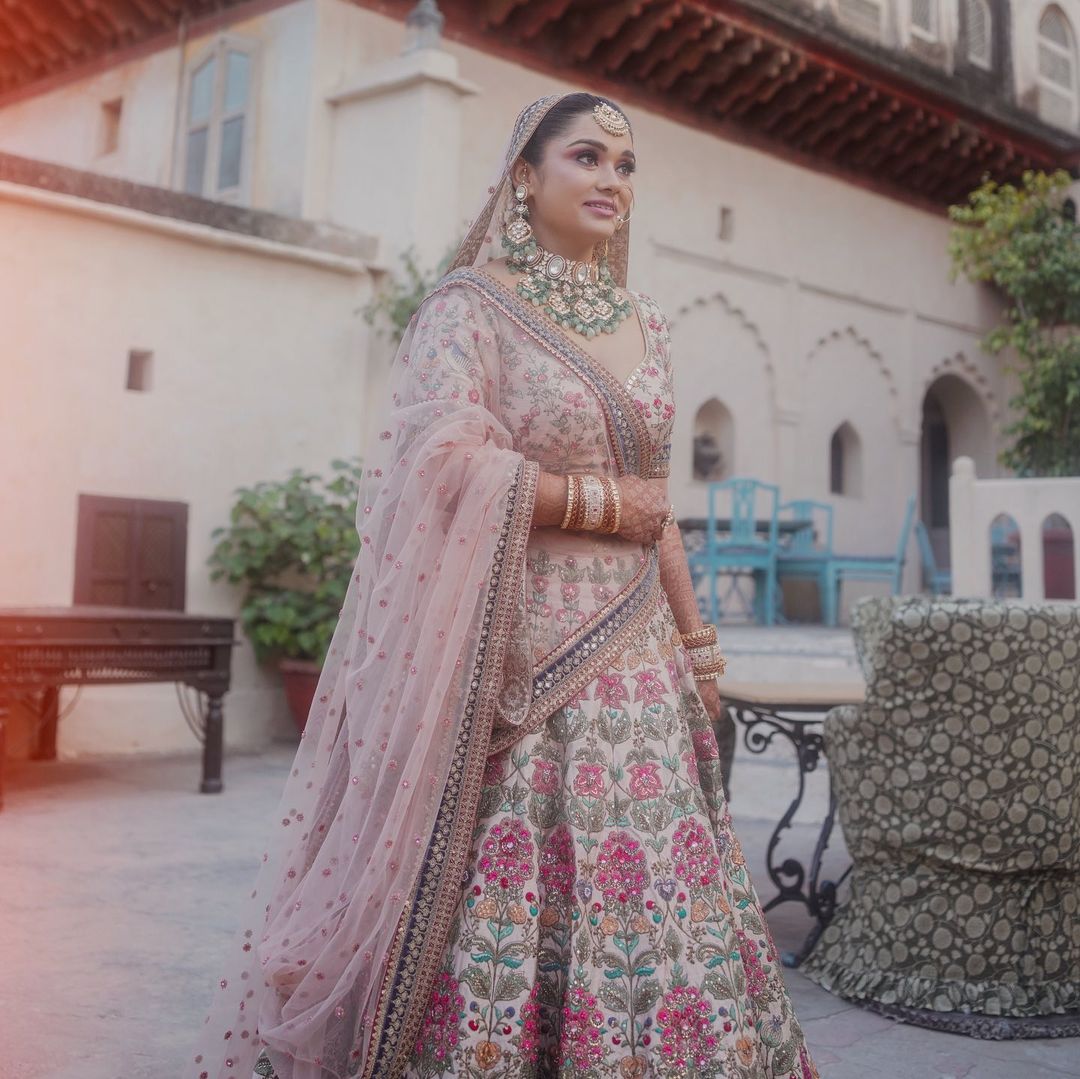 The bride, Ginni Malik, had dazzled in a baby pink-floral lehenga from the shelves of Sabyasachi Mukherjee, for her wedding in Alwar, Rajasthan. She had looked breathtakingly gorgeous in the lehenga with hand-embroidered phulkari design by a silk-floss thread, paired with heritage zardosi borders. While posting her wedding pictures on her IG handle, Ginni had mentioned the surreal feeling while she had walked under the phoolon ki chadar. Ginni's caption could be read as:

“And I knew exactly how old Walt Disney’s Cinderella felt when she found her prince.” 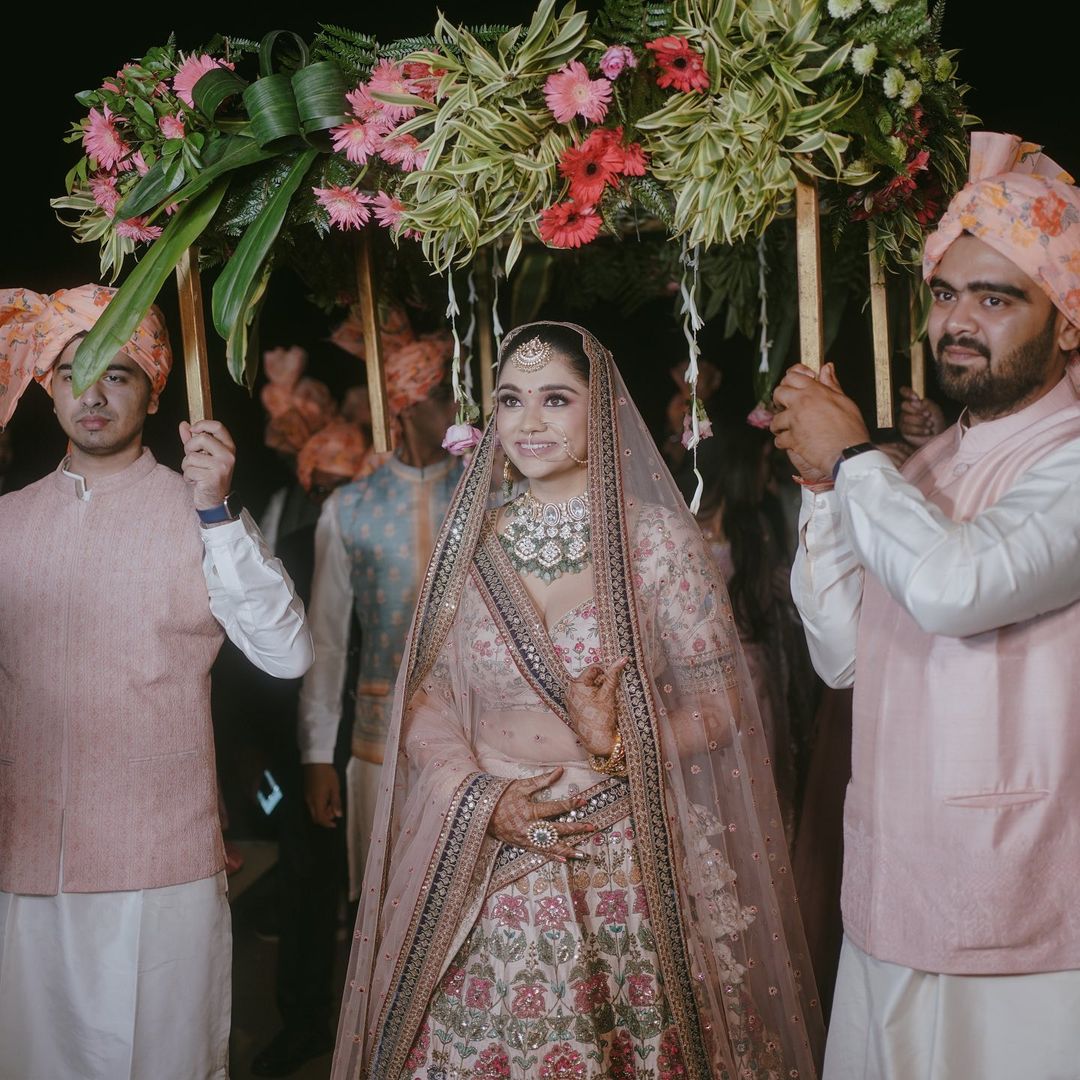 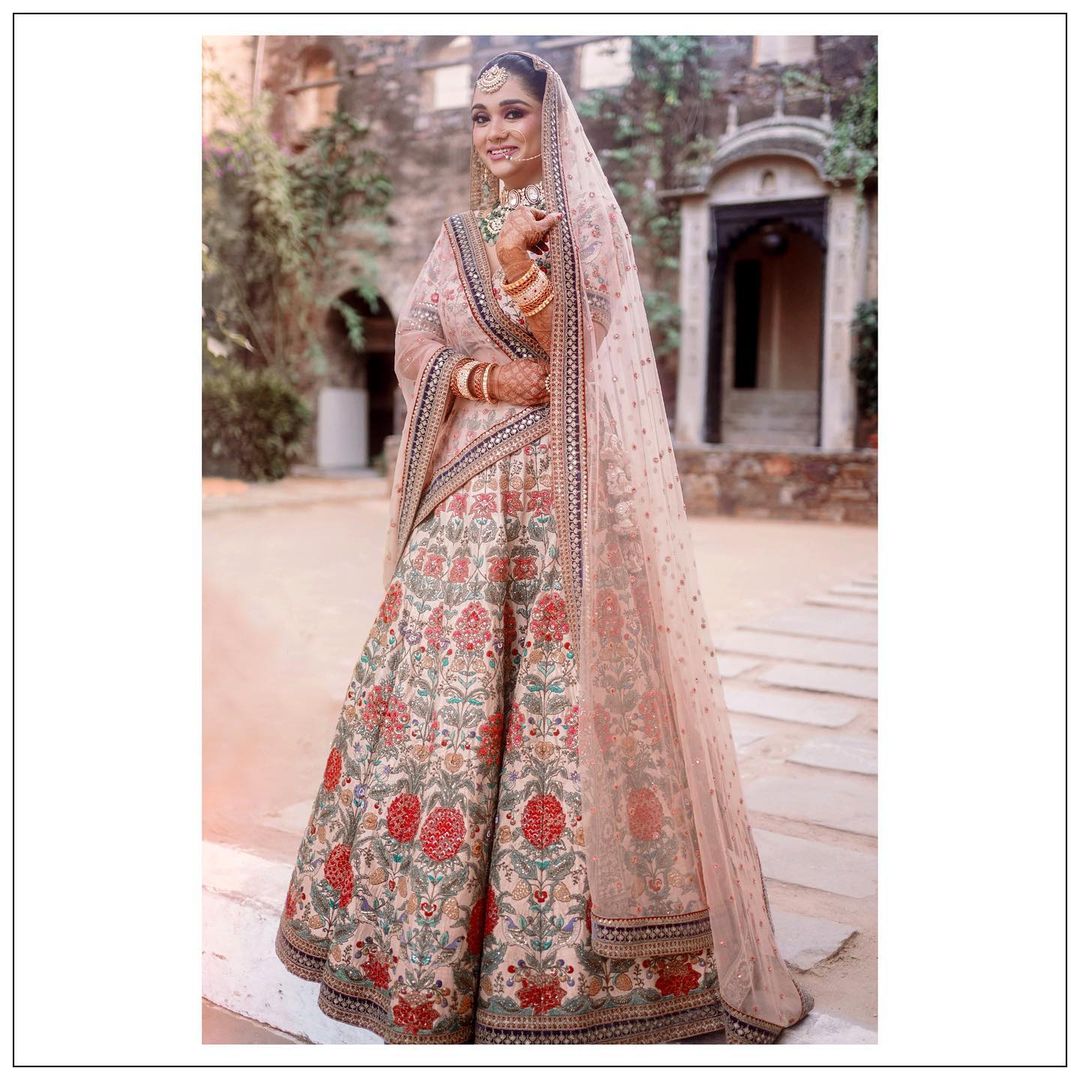 Ginni had amped her traditional maharani sa-vibes with the heavily embellished lehenga paired with a matching semi-sleeved blouse with a plunging neckline. In addition, she had teamed her lehenga with a net dupatta, adorned with buti work and zardosi border. 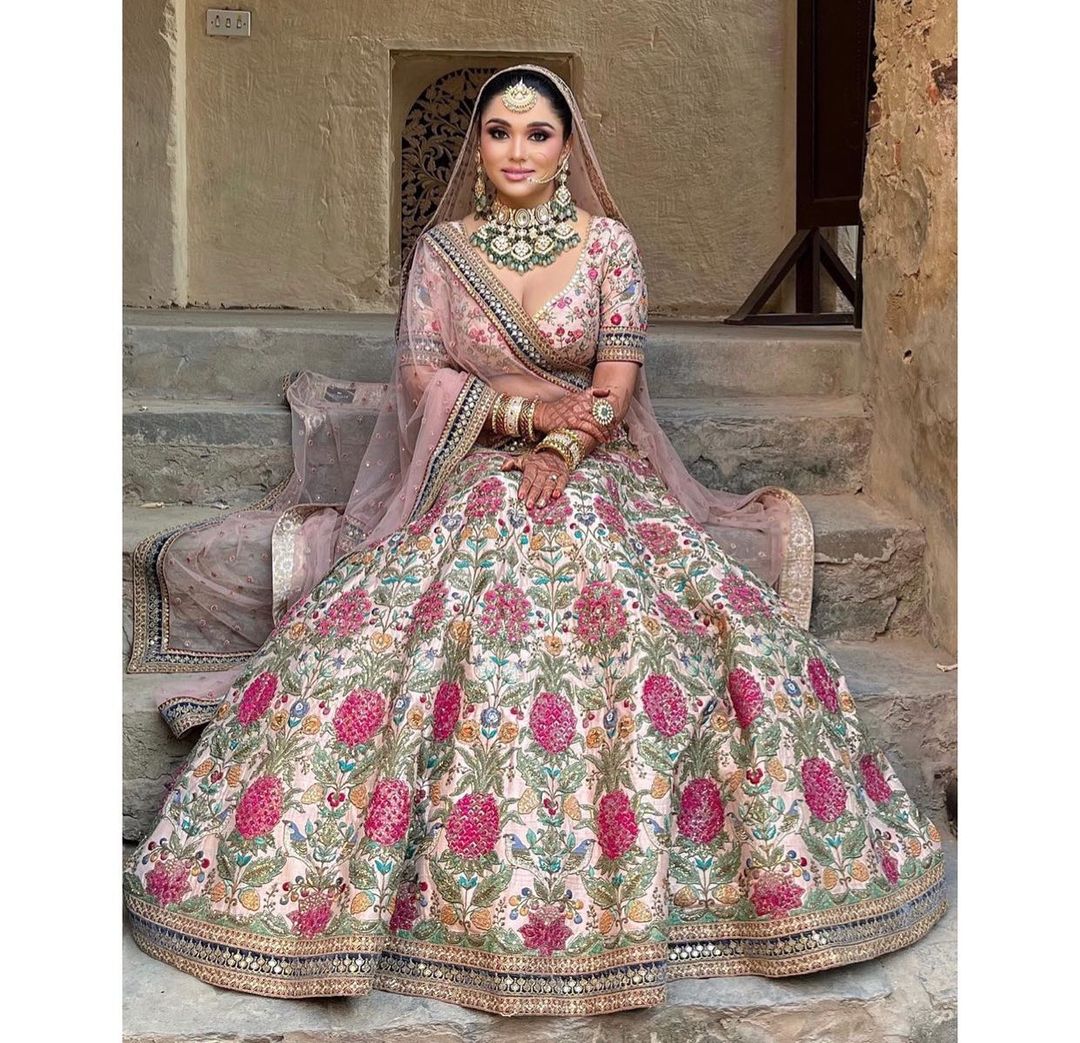 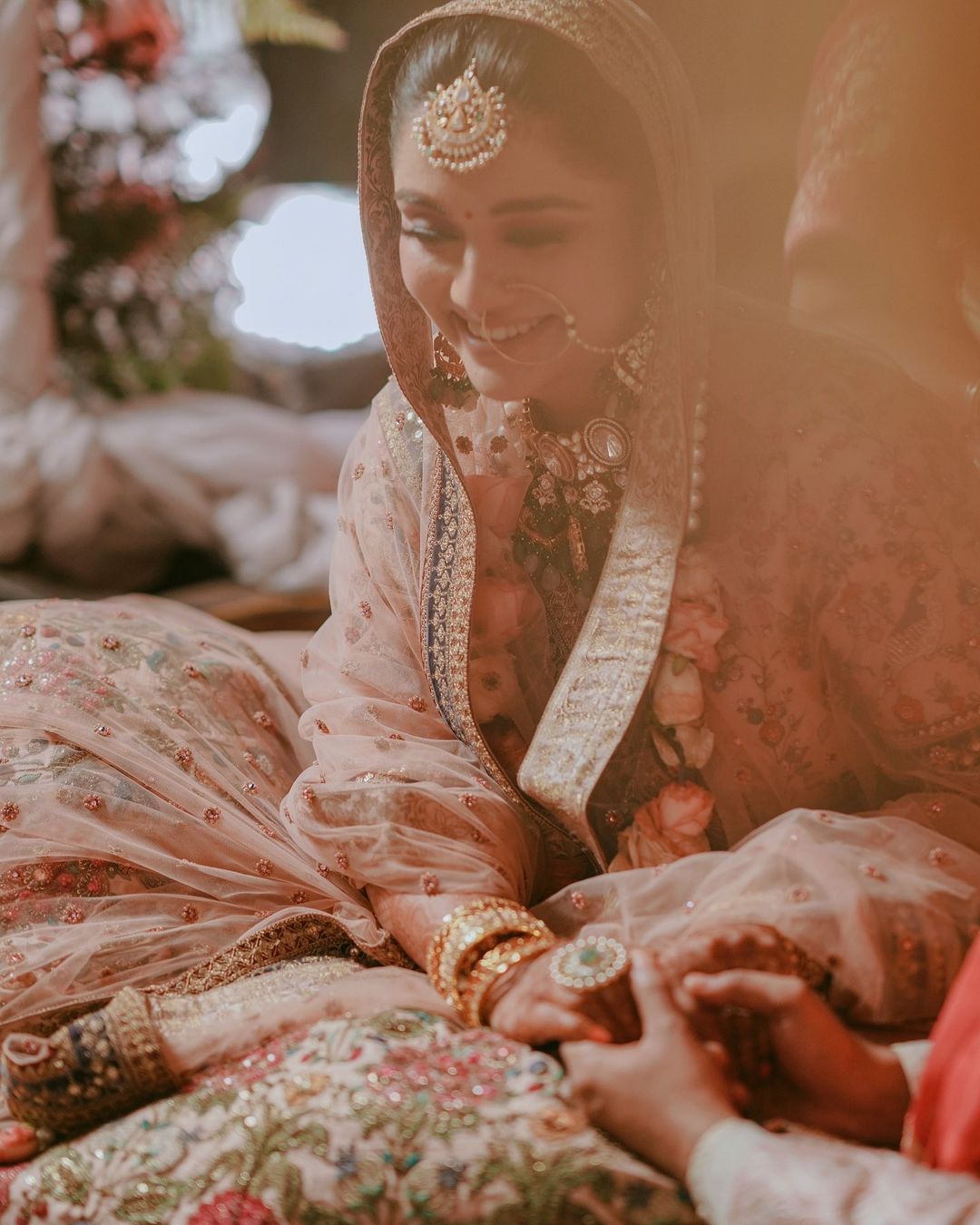 She had completed her look with Polki jewellery adorned with stone studded detailings of uncut diamonds and double shaded green drops. Her exquisite jewellery had included a broad neckpiece, long matching earrings, a maang teeka, and a sleek nath. She had also flaunted stone studded golden and red coloured bangles along with an oversized matching ring. 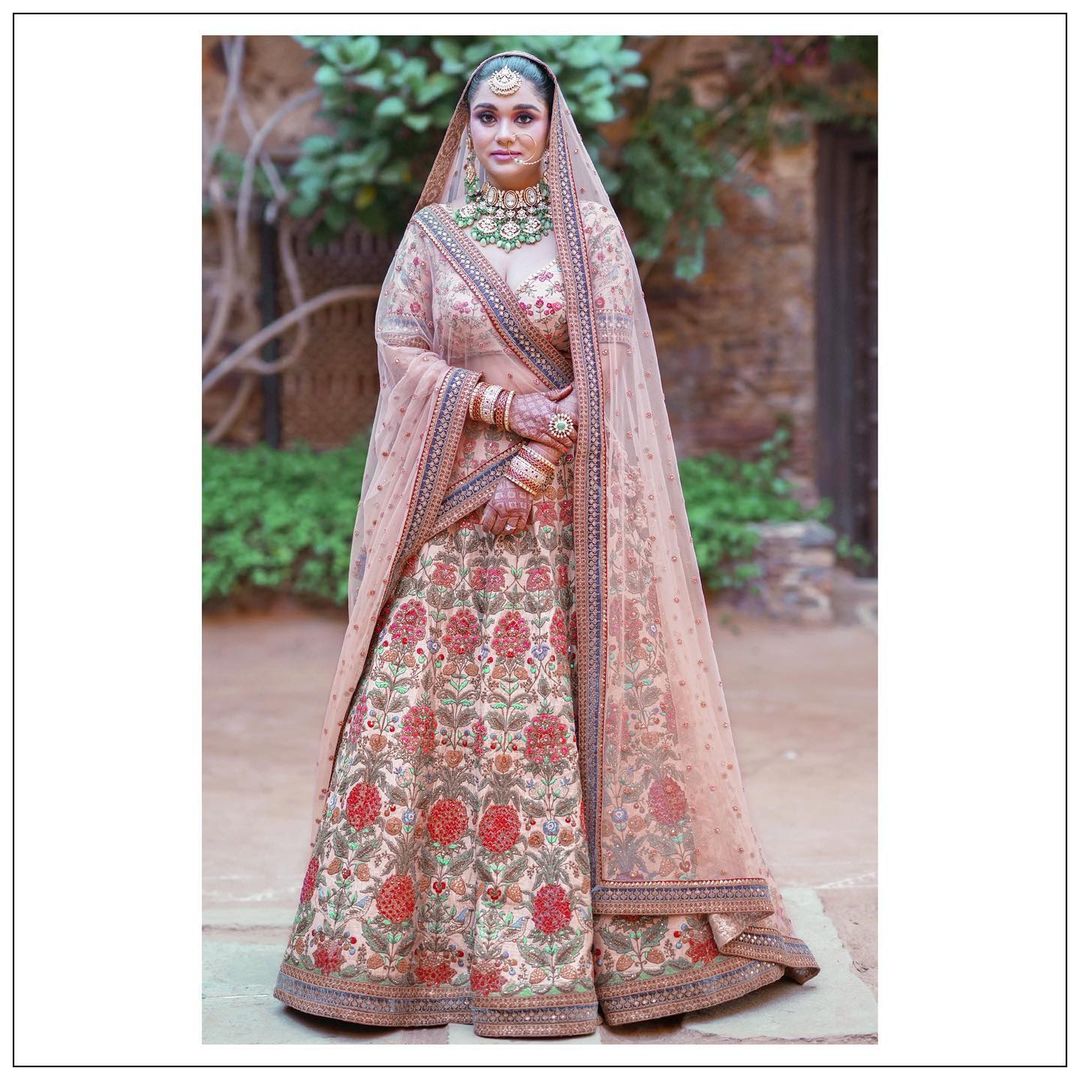 A subtle makeup by Rashi Sehgal had accentuated Ginni’s look and had added an oomph factor to her overall look. Her makeup had included soft peachy touch to her cheeks, bold eyeliner, golden eyeshadow, defined eyebrows and pink lips. In addition, Ginni’s hairstylist had tied her hair in a bun and had adorned it with beautiful white carnations. 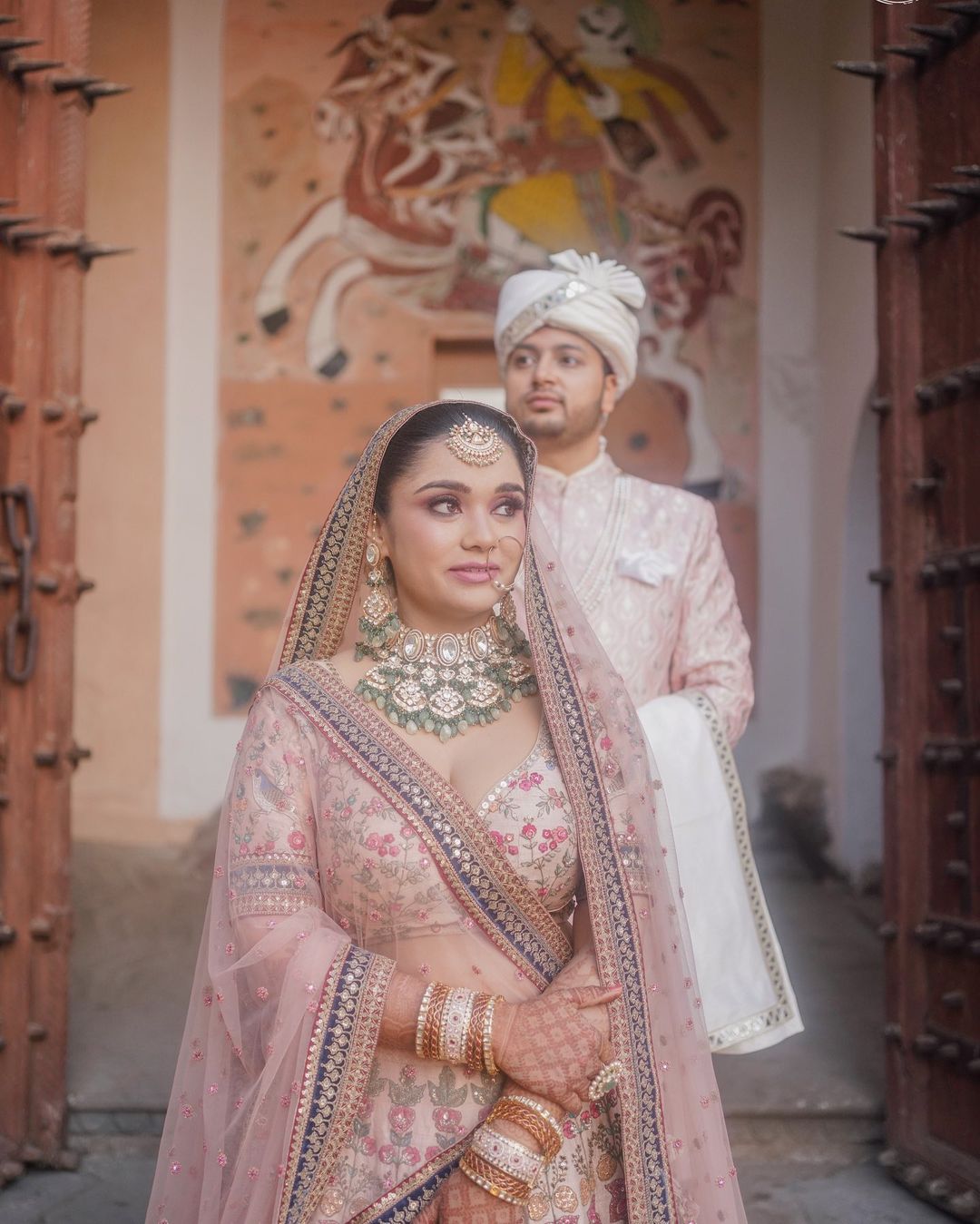 The bride, Ginni Malik, had got married to the love of her life, Abhinav Jha in a traditional wedding ceremony. They had met in New York, and love started brimming between them right from their first meeting and finally, the couple had hoped to the next level and became each other's forever. The groom had complemented his bride's look, as he had donned a baby pink kurta paired with white pyjama along with a white pagdi and white doshala. He had completed his look with a white pearl necklace and a pair of white Kolapuri jooti. 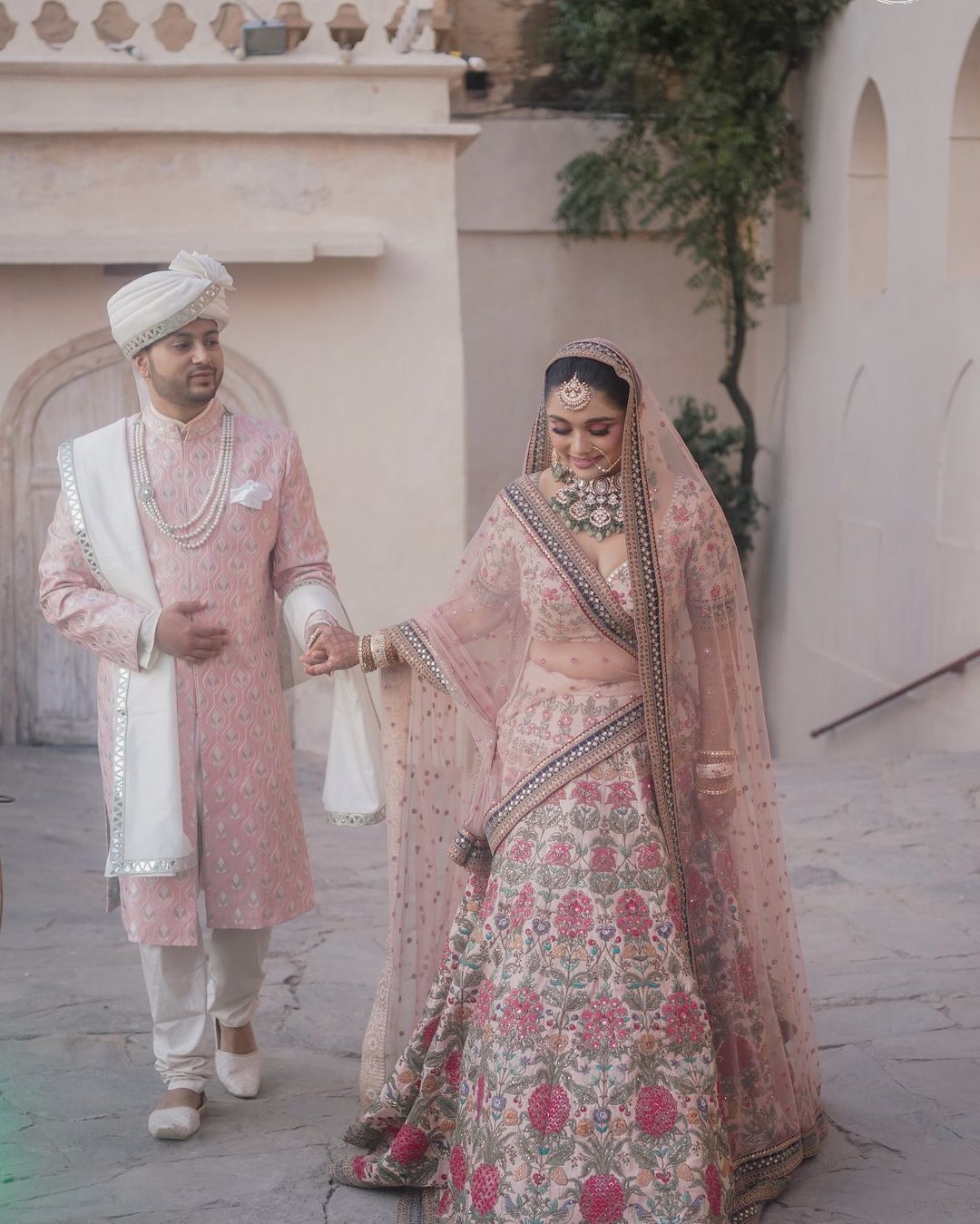 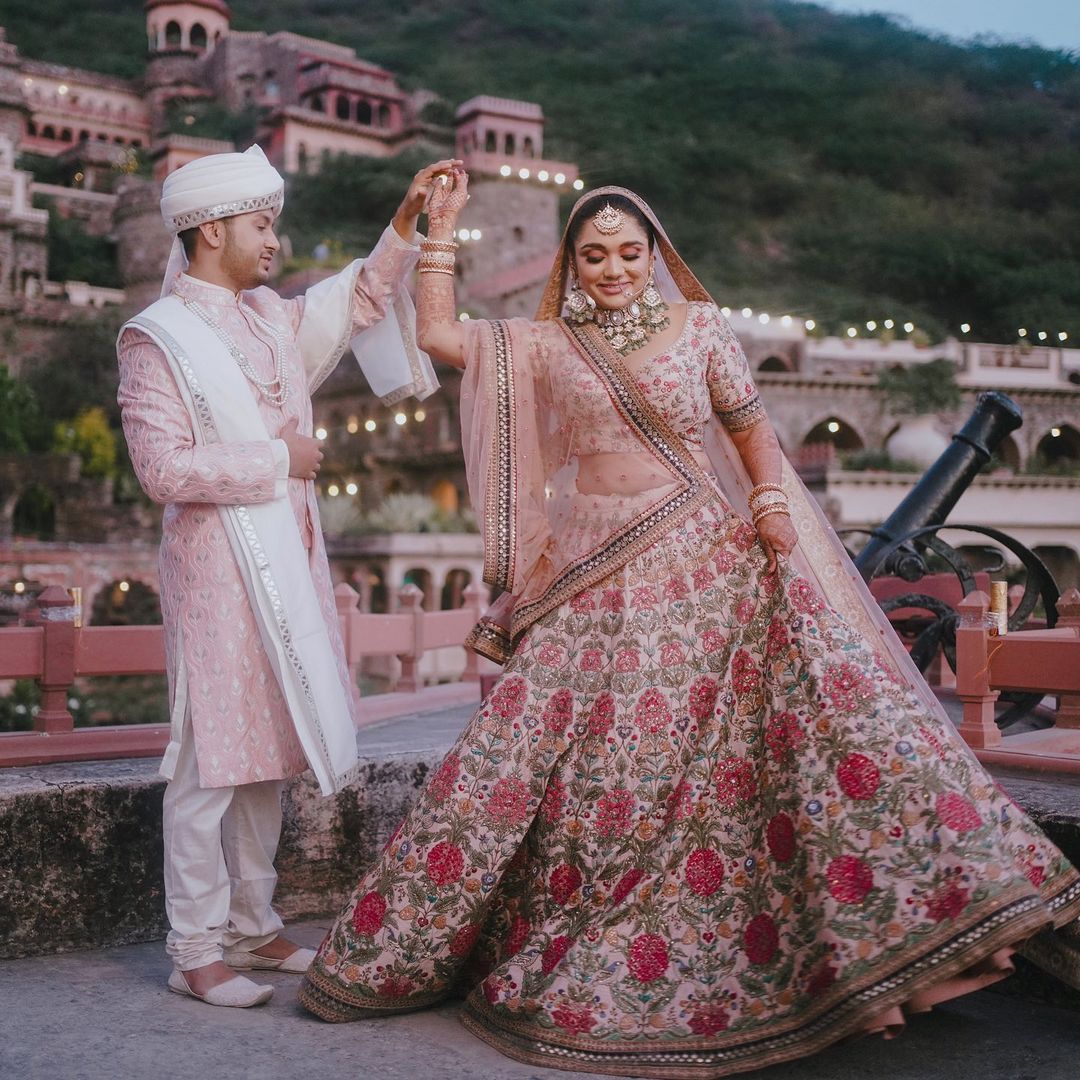 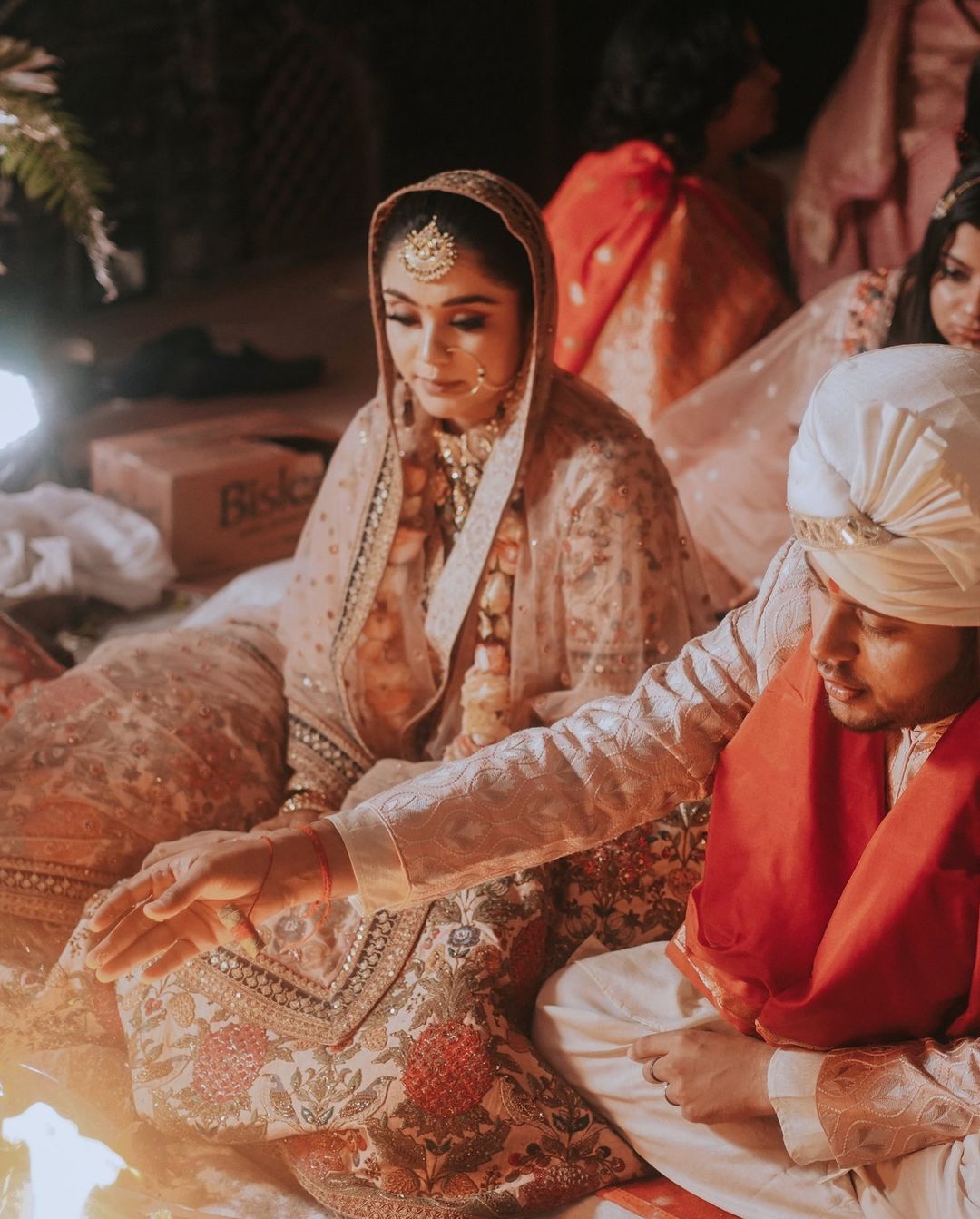 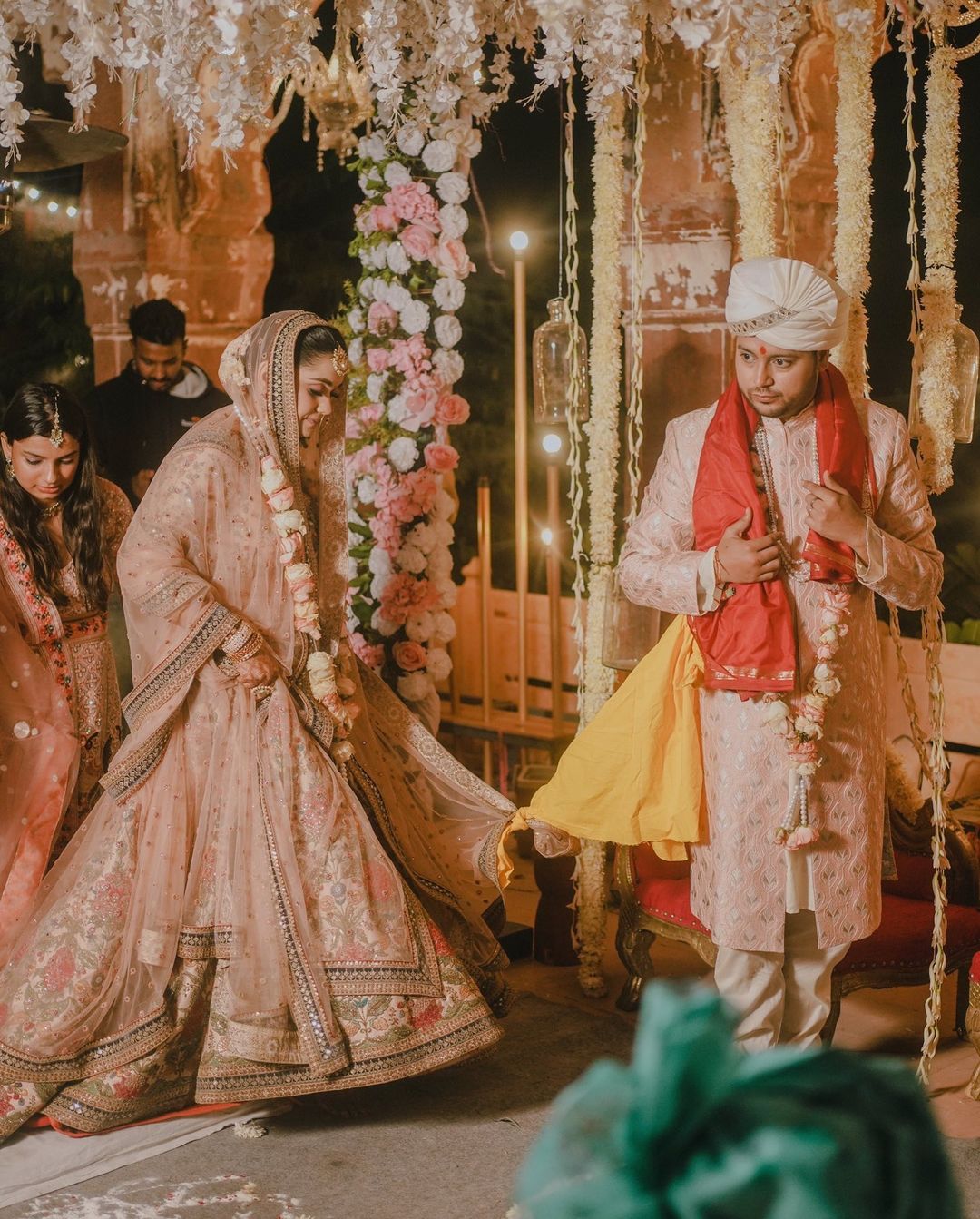 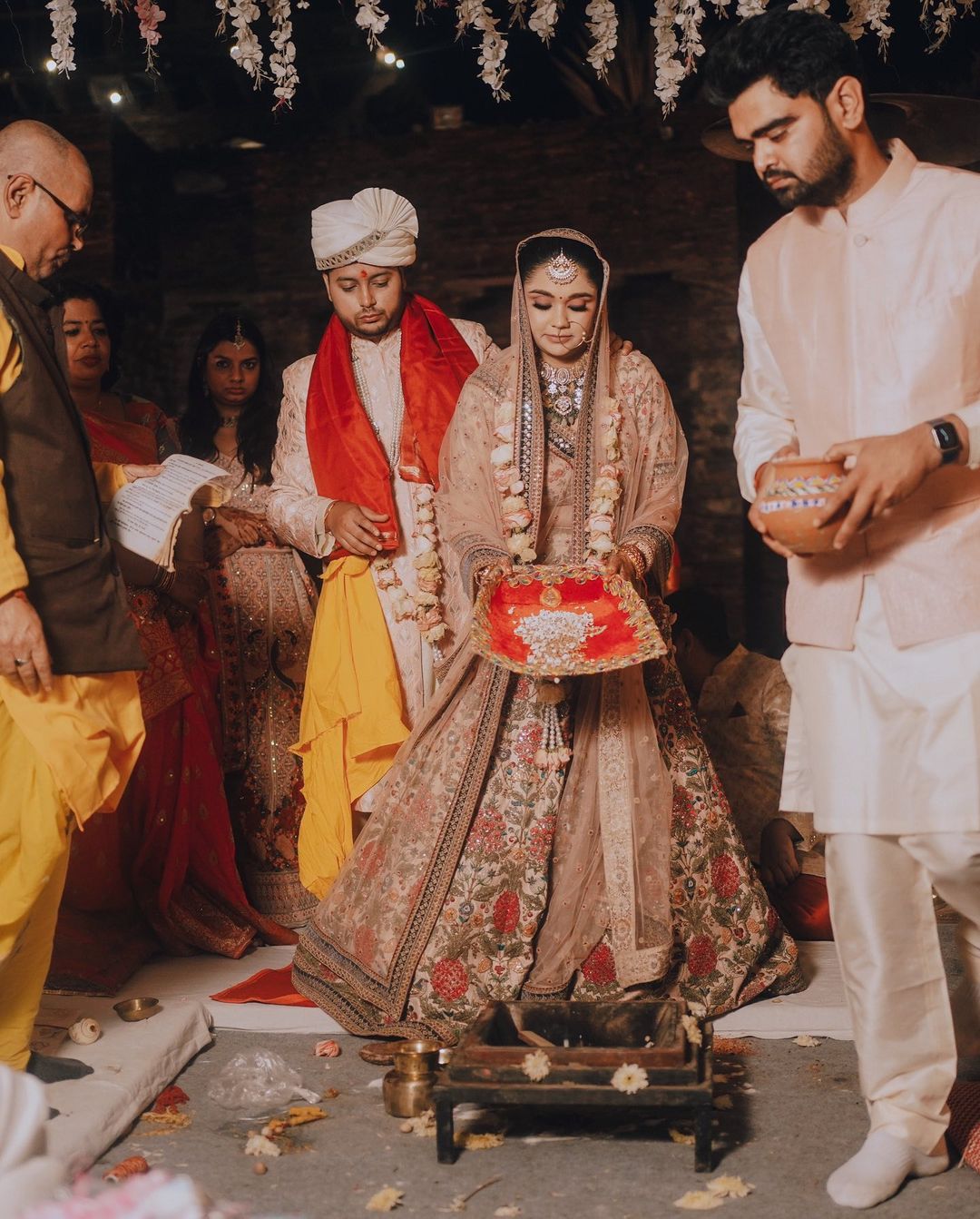 We are already in love with the bride, Ginni Malik’s fabulous baby pink lehenga giving a Maharani Sa feeling. What about you? Let us know.

Suggested Read: The Sabyasachi Bride Wore A Multi-Coloured Lehenga And Donned It With A Rajwada Style 'Dupatta'