For a mother, her daughter's achievement is her biggest source of happiness, and Raveena Tandon is a perfect example of it. Check out Raveena's appreciation note for her daughter!

A mother and a daughter share a bond, which no one can ever understand. A mother understands her daughter's every excuse and mood swings. She is the role model in her little girl's life. At the same time, her daughter starts becoming her best friend. From a very young age, a daughter starts helping her mom in the household chores, she understands her emotions and becomes the reason behind her smile. It is not wrong to say that a daughter is just the perfect mini-version of her mother. And Bollywood actress, Raveena Tandon shares an exactly similar relationship with her little girl, Rasha Thadani. (Recommend Read: Shriram Nene Making Pizza For Madhuri Dixit And Feeding Her With His Own Hands Is Pure Couple Goals)

Before we take you further into the story, let us take a look back at Raveena Tandon's journey. The gorgeousness was the heroine of every hit film in the '90s. From her acting skills to her thumkas, she has made the entire nation groove on her hit dance numbers. But not many know that the actress had adopted her cousin's kids, Pooja and Chhaya and gave them her last name 'Tandon'. While many used to pass judgements on Raveena's decision, she was sure that she had made the right decision and she will find a man, who will accept her with her kids. And then she found her prince charming, Anil Thadani and with him, she has created her 'happily ever after' and raising two adorable kids, Rasha Thadani and Ranbir Thadani. 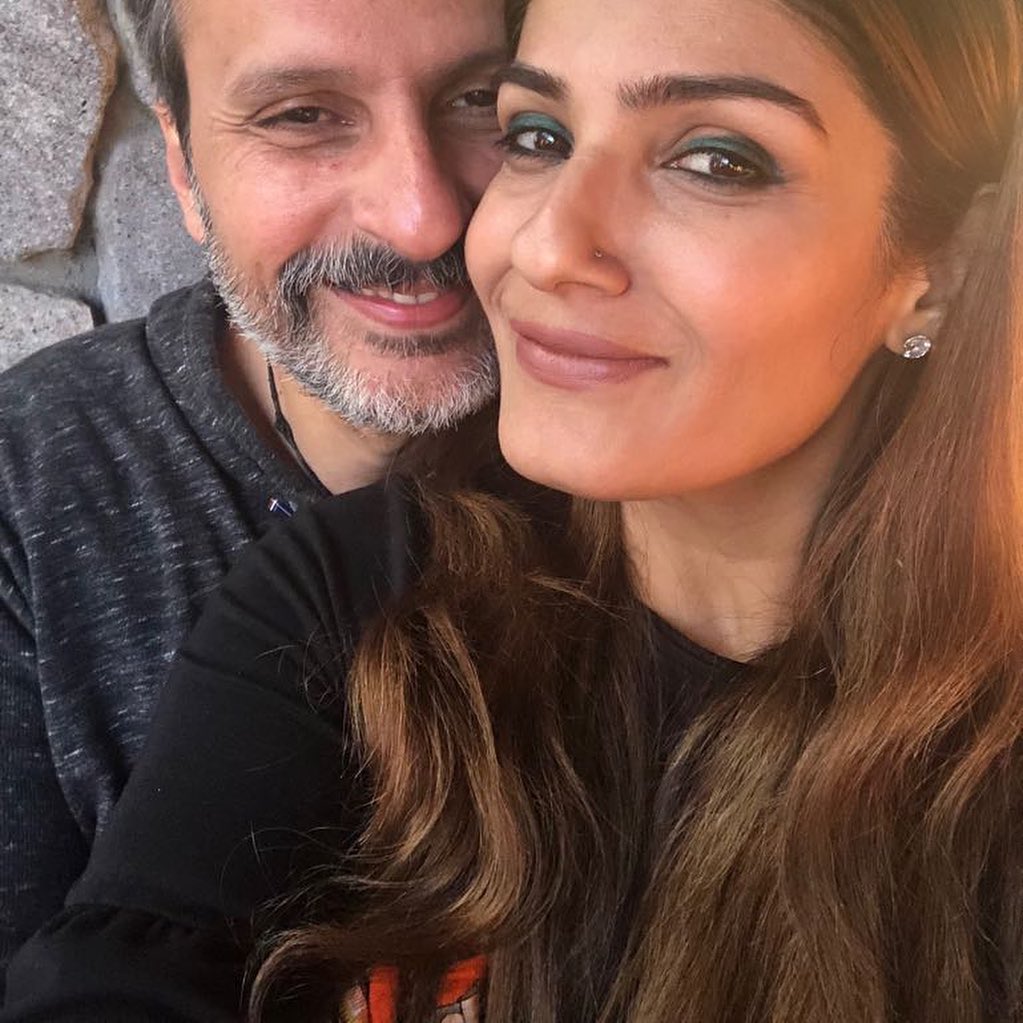 Raveena often shares glimpses of her happy life on her Instagram handle. On February 26, 2021, Raveena's daughter, Rasha won a black belt in Taekwondo, and the gorgeous actress penned an appreciation note for her. Sharing pictures from the day, Raveena wrote, "Meri beti Blackbelt! @officialrashathadani proud of you! Love the way you don’t remove your mask and are following all safety protocols! Safety first during these times of exams. Love the way you say Kal school jaana hai." Check it out below: 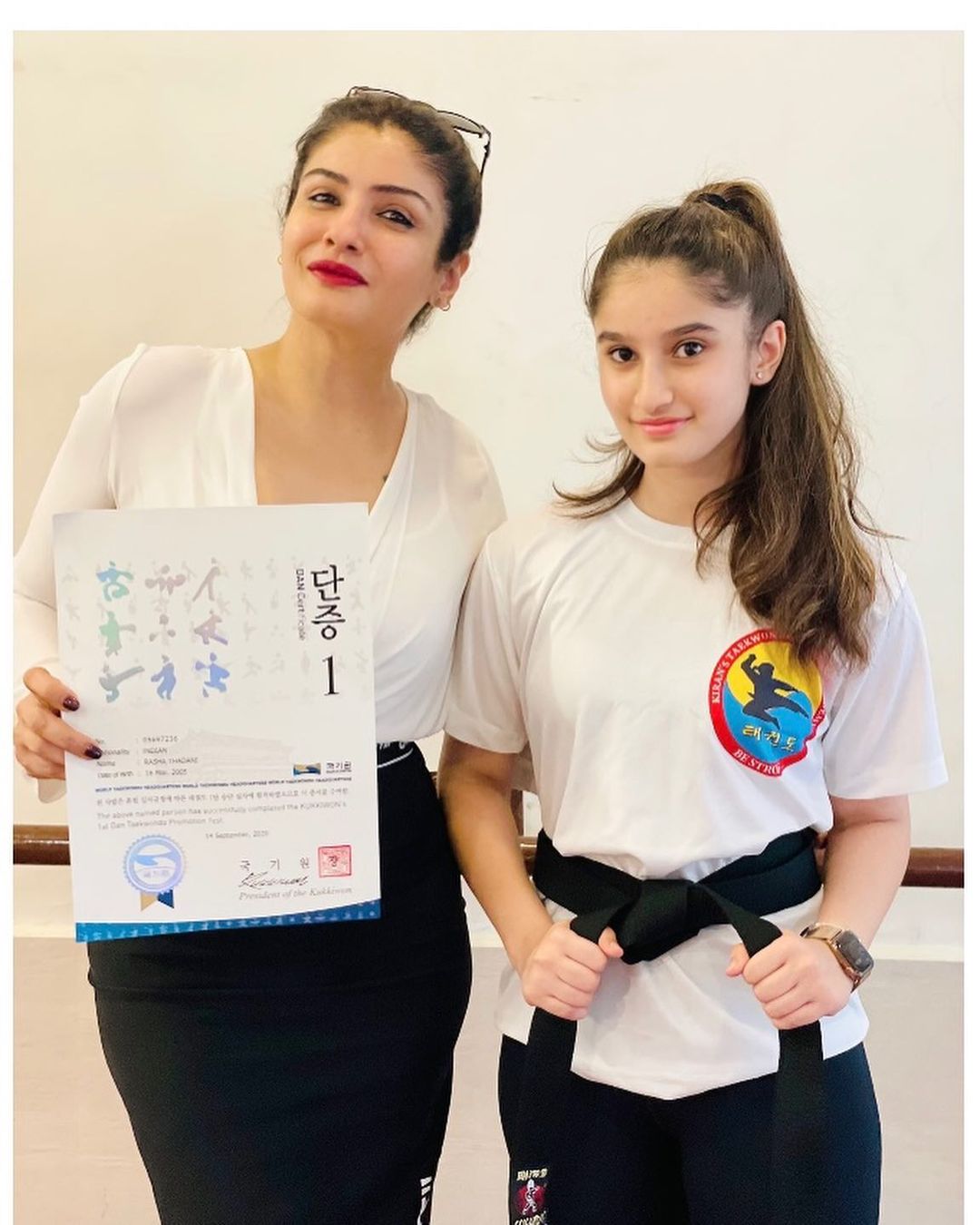 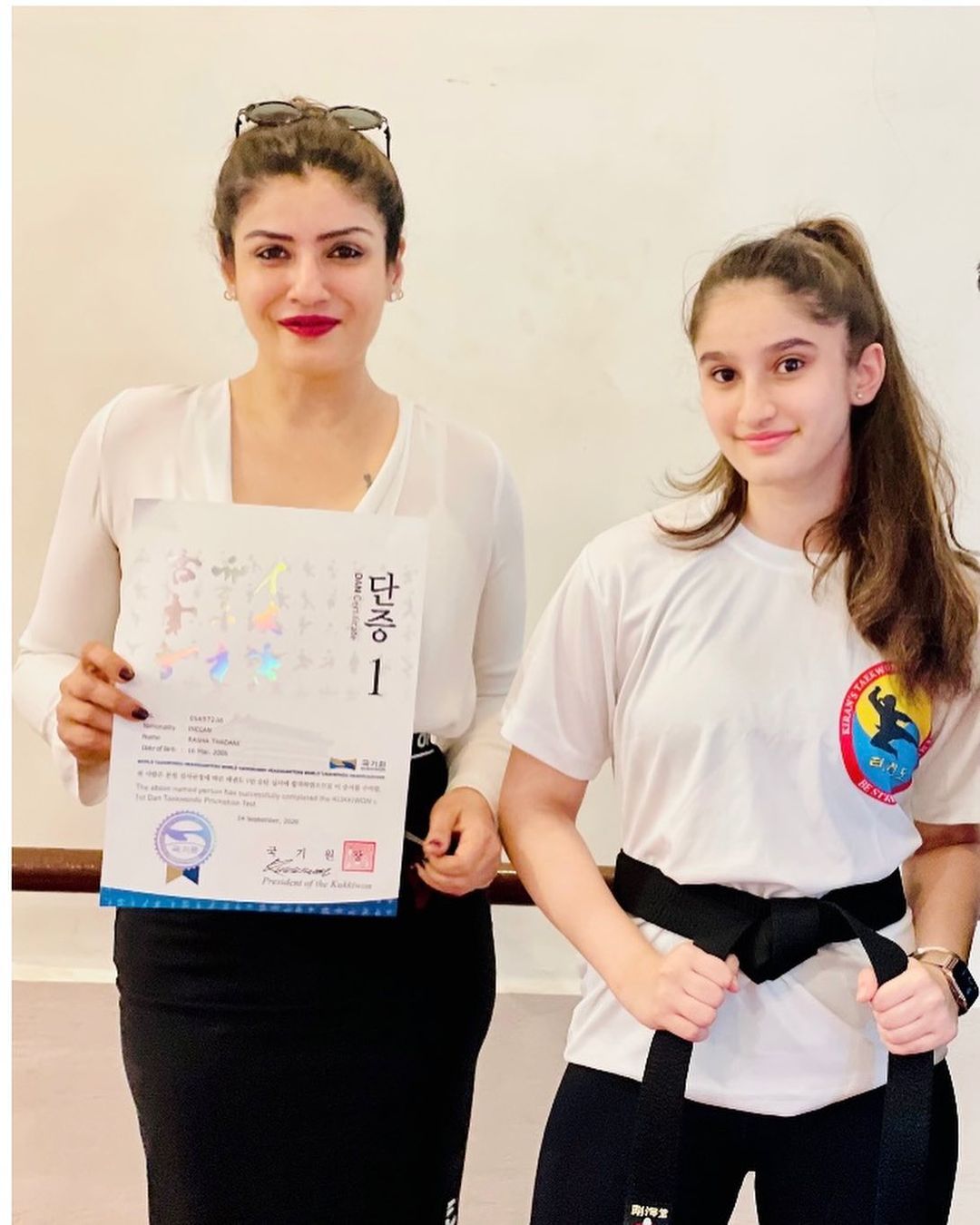 For those who don't know, Raveena's 'not-so-little' daughter, Rasha is a pro in boxing. The actress had once shared her video on Instagram while she was practising like Mary Kom. Raveena had captioned the video as “No One just No One messes with Mah Baybee. My little #marykom”. (Also Read: MS Dhoni's Photo With Newborn Daughter, Ziva As He Covered Her In His Arms To Protect Her From Crowd)

Earlier, in an interview with the DNA, Raveena had talked about the camaraderie she shares with her daughter, Rasha and how at times she gives her opinion on finalising an outfit. She had shared, "Raasha’s not on social media yet. She is just 12. There’s a right age for that as well, for that kind of exposure. When she is 14 or 15, we will see. Right now, when she watches me go out to shoot or watches my episodes on TV, I definitely get my fair share of comments — what I should be doing with my hair or not and stuff like that. She has her opinions on the dresses I wear and is extremely fascinated by the idea of make-up. So whenever I am getting ready and doing my make-up, she generally comes and watches me or studies along when I’m doing it." (Don't Miss: Amrita Rao Talks About Motherhood And Reveals How Her Baby Boy Has Been Keeping Her On Her Toes)

Well, we love Raveena's appreciation note for her daughter, Rasha on winning a black belt!