Rakhi Sawant is again grabbing the limelight for her personal life. She recently announced the news of her wedding with a mystery man, Ritesh. Scroll down as the mystery man reveals his identity.

When we talk about controversies and bold statements, the one name that comes to our mind is that of Bollywood’s controversy queen, Rakhi Sawant. She has always managed to grab the attention of the public and media by sharing controversial opinions and photos. Whenever she shares any news about her personal life, people take it as a publicity stunt and ignore the same. Rakhi has always stood by her tag of being the most controversial actress of Bollywood.

Rakhi Sawant had created a buzz when she had posted her white wedding look and announced her wedding news on her social media handle. The couple had married in a private room to keep their wedding a secret and ever since she had announced the news, the public and the media were eagerly waiting for her NRI husband to reveal his identity. There were rumours that Rakhi’s husband will be disclosing his identity on the reality show, Bigg Boss 13. However, the makers had denied any such news. (Also Read: Bipasha Basu And Karan Singh Grover Celebrate Their First Sindoor Khela Post Marriage) 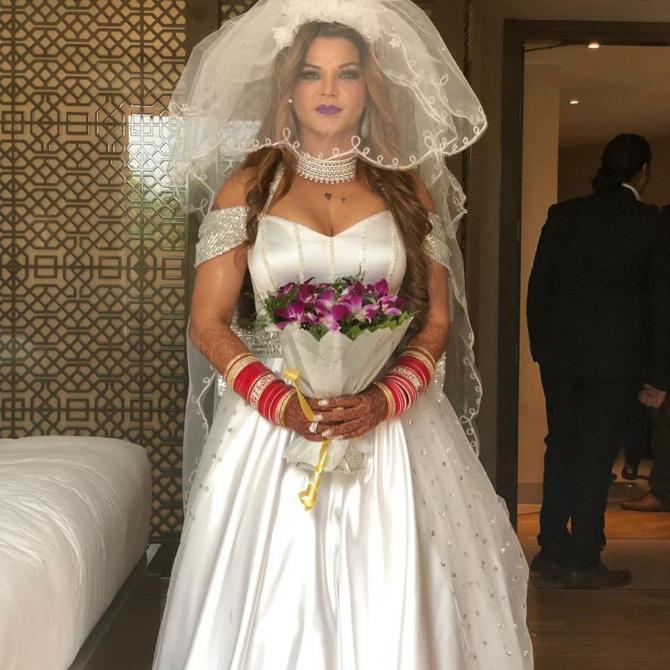 Being an outspoken and controversial star, Rakhi’s statements are sometimes not taken seriously by the audiences and the same thing had happened with the news of her wedding to her NRI husband. But, Rakhi has been claiming that her husband is not camera friendly and that is the reason why she is not sharing his photograph with the media and her fans. After months of speculations on whether he exists or not, Rakhi’s NRI husband, Ritesh has finally spoken to SpotboyE and reveals details about Rakhi and his personal life and has stated that Rakhi is god’s gift to him. 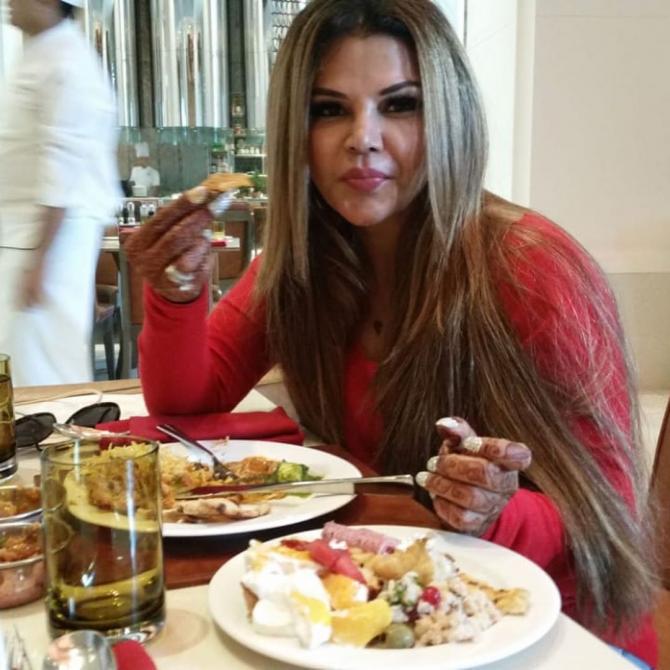 Rakhi Sawant is famous for her controversial statements and outspokenness, but her husband thinks that this is the best part of her life. When asked if he wants to change anything about her, pat came his reply, “Nothing. I am blessed. Rakhi is God's gift to me. I have never seen a woman like her. I think she is superior to me.” And talking about one thing he would never want to change in Rakhi, he said, “Her outspokenness. She is very frank, and I think that's a great virtue.” Ritesh has shared the news about starting a family and said, "I want two kids. I have a gut feeling that my first will be a daughter and the second one will be a son." When asked if Rakhi is pregnant, he revealed, "Not yet, but she will soon be." 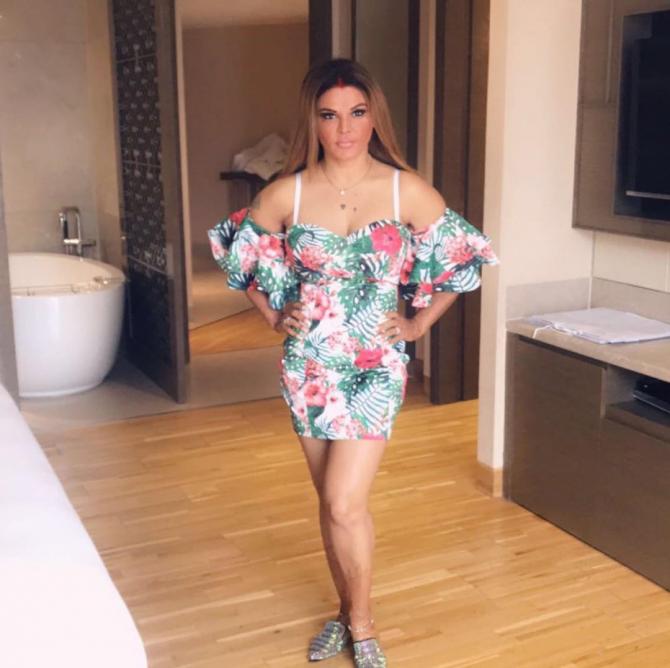 Talking about the news of their wedding and how people didn’t take it seriously and questioned his existence, Ritesh said, “I am a very simple man, who goes to work at 9 am and is home by 6 pm. I know there are some people who don’t believe that I exist when Rakhi announced her marriage. But here I am, talking to you. Rakhi may be a different person in front of the camera, but she is a wonderful person at heart.” (Recommended Read: This Bride Opts For White Bridal Chooda With Sabyasachi Bridal Lehenga, Proves White Is The New Red) Rakhi is quite famous for her bold scenes and dance numbers in the movies and she has done them with quite an excellence and confidence. In an interview post her wedding, Rakhi had stated that she will not do bold scenes in the movies because her husband has issues with the same. Agreeing to the same, Ritesh revealed, “That's right. She is married now, she has a new life. Who would like his wife to go bold on screen? BY the way whatever she told you in that interview was true to every word. I was her fan from the day I saw her in her interview with Prabhu Chawla. And, I have seen almost all her work till date.” 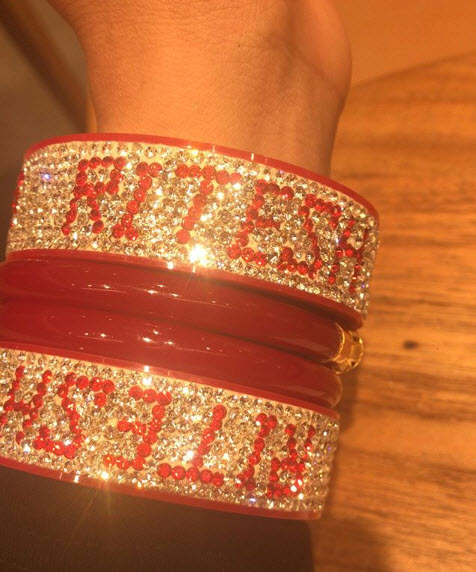 Talking about her hush-hush wedding with her mystery man, Ritesh, Rakhi in an interview with SpotboyE had talked about him in details and had said, “Well, his name is Ritesh and he is in the UK. In fact, he has already left. My visa is underway and I will join him. Of course, I shall continue to work whatever I get in India, so will shuttle for that. I always wanted to produce TV shows and I think my long-standing dream will now be fulfilled." Post her wedding Rakhi will soon be shifting to Bangalore to live with her husband and his family. A SpotboyE report had claimed, “The actress who’s based in Mumbai is planning to shift to Bangalore to stay with Ritesh's family. Considering her work schedules, she will keep coming down to the city of dreams, but on her husband’s request, she will spend the maximum amount of time with his family as they are based in Bangalore." Rakhi had also revealed how she had met her hubby, Ritesh and had said, “It's a fab story. He was my fan. He WhatsApped me. Messaging and then talking to him, we became friends with the passage of time. This happened about a year-and-half back. Then in fact, he proposed if I would like to marry one of his friends. I turned it down politely. Dil mein ghanti nahin baji, I told him. He promptly asked, 'Mere liye dil mein ghanti bajti hai kya?' I said I need time to think. As more time rolled by, I realised I was falling in love with Ritesh. And, it was happening so very naturally. Trust me, I met him for the first time only 15 days before our wedding. He came down and I was sure that I had met the right guy." The photo of Rakhi Sawant in a wedding dress had taken the internet by storm and reports had claimed that the actress had gotten married, but it was Rakhi who herself had denied the rumours and had stated, “I was doing a bridal shoot at JW Marriott, I don't know why people are saying that I am married. I am not married, I am not in a relationship. I am very much single.” But, later accepted the news and she had revealed, “Main dar gayi thi, haan maine shaadi kar li hai. I am confirming the news with you today. (I was scared but yes, I got married. I am confirming the news with you).” Rakhi had shared details about her Christian wedding and had stated, “He is a Hindu NRI and I am a Christian, so I did a court marriage and had a Catholic wedding. The wedding was intimate with just family members. My husband works with Donald Trump’s company as an employee.” She had further added, “Mera pati mere liye parmeshwar hai.” (Do Read: Priyanka Chopra Reveals What Ambanis Gifted Her On Her Wedding With Nick Jonas In Jodhpur)