In her brand new stint, Rakhi Sawant did something unbelievable to entice her crush, Abhinav Shukla. Scroll down to know what it is!

Rakhi Sawant has surprisingly emerged as one of the most popular and entertaining housemates of the most controversial reality show of Indian television, Bigg Boss 14. From talking about her bankruptcy to her hush-hush wedding, from talking about her husband, Ritesh (who's yet to reveal his identity) to openly expressing her liking towards fellow housemate, Abhinav Shukla, Rakhi has given every flavour of entertainment to the viewers. Now, in her brand new stint, Rakhi has done something unbelievable to entice her crush, Abhinav. Scroll down to know what it is! (Recommended Read: Neha Kakkar Gives A Nice 'Champi' To Her 'Mumma', Husband, Rohanpreet Captures The Beautiful Moment)

Last weekend, the housemates were given a task to burn their weaknesses in the holy fire. When Rakhi's turn had come, she had gotten a little emotional remembering her husband, Ritesh. But Rakhi being Rakhi, had cracked everyone by hilariously revealing that she sees her husband in Abhinav Shukla. Her confession had lightened the vibe, and everyone had started laughing and teasing Abhinav. 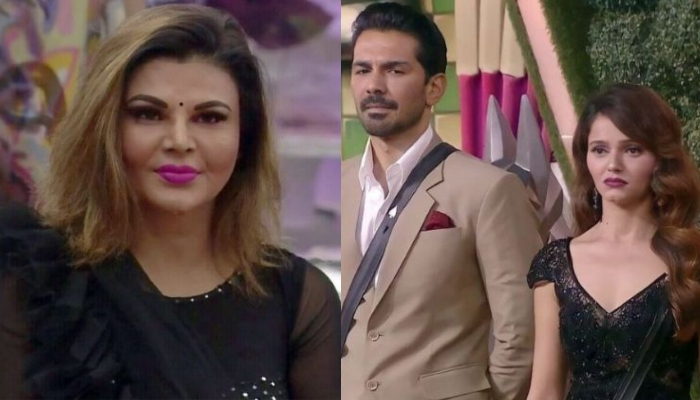 In tonight's episode's promo, we can see Rakhi Sawant asking Abhinav Shukla if his wife, Rubina Dilaik has a problem if they wash utensils together. She said, “Apki biwi ko shayad neend nahi aaegi agar mai apke saath bartan dhoun (Maybe, your wife will not be able to sleep if I wash utensils with you)." To Rakhi's statement, Rubina retorted, “Rakhi! Is tareeke ki baat mat kijiyega (Never say things like this)." Afterwards, Rakhi was seen roaming around the house with ‘I Love Abhinav’ written all over her body with red lipstick, along with a few hearts drawn. Abhinav looked utterly disgusted with Rakhi's shenanigan, to which, she said, “Mera crazy love hai.” Abhinav Shukla's wife, Rubina Dilaik looked furious over Rakhi's stint and was heard calling it 'cheap entertainment'. She further said, "Wo khud kharaab dikhengi."

Earlier, Rakhi was seen with co-contestant, Sonali Phogat expressing her feelings for Abhinav. Rakhi had shared that no man had entered her life after her breakup with ex-beau, Abhishek Awasthi. She had also said that she doesn’t want to break Abhinav and Rubina’s relationship and just wishes to spend some time with him. In her words, “I want him to accompany me on my outdoor shoots, take me on coffee dates, go to watch films." She had then gotten emotional and had revealed that she cannot always run behind her husband as he won’t ever accept her in public because of some personal issues. (Also Read: Riddhima Kapoor Sahni Pens A Heartmelting Wish For Hubby Bharat Sahni On Their 'Crystal Anniversary') Rakhi had also expressed her concern that her husband will never come out in open and accept their kids if they ever have in future. Crying inconsolably, Rakhi had mentioned that he will only give them his surname and won’t ever come to meet them. Continuing, the actress had revealed that she had frozen her eggs and once she is out of the show, she will ask Abhinav and Rubina if he can become her donor. She had said, "I will produce my babies without doing anything wrong." Talking about Rakhi Sawant's husband, after months of speculations on whether he exists or not, he had finally spoken to SpotboyE and had revealed details about Rakhi and his personal life. When asked if he wants to change anything about her, he had retorted, "Nothing. I am blessed. Rakhi is God's gift to me. I have never seen a woman like her. I think she is superior to me." And talking about one thing he would never want to change in Rakhi, he had said, "Her outspokenness. She is very frank, and I think that's a great virtue." Ritesh had shared the news about starting a family and had said, "I want two kids. I have a gut feeling that my first will be a daughter, and the second one will be a son." When asked if Rakhi is pregnant, he had revealed, "Not yet, but she will soon be." (Don't Miss: Varun Dhawan Grows Protective Of Wife, Natasha Dalal Soon After Wedding, Says, 'Darr Jayegi Bechari')

What are your thoughts about Rakhi's stint?