Amidst these testing times, Shilpa Shetty Kundra’s husband, Raj Kundra has found a new way to add entertainment into his life by making memes out of their married life. Check out!

The lockdown due to the on-going pandemic is growing over us and it is driving all of us nuts. We desperately need to step out and meet our friends and family before we go crazy. We are done watching movies on Netflix, cooking and working on our hobbies, and seriously need new things to motivate us. Amidst these testing times, Shilpa Shetty Kundra’s husband, Raj Kundra has found a new way to add entertainment into his and his fans' lives. (Also Read: Milind Soman's 81-Year-Old Mother, Usha Soman Celebrated Her Birthday Doing 15 Push-Ups [VIDEO])

Shilpa Shetty had decided to tie the knot with the London-based businessman, Raj Kundra on November 22, 2009, breaking the hearts of many. The couple had welcomed their first baby together on May 21, 2012, naming him, Viaan Raj Kundra, and had welcomed their little angel, Samisha Shetty Kundra on February 15, 2020, completing their family picture. It is said that love takes a backseat when a couple is blessed with a baby, however, Shilpa and Raj have proved it wrong time and again, as their love seems to grow every day. The two, on one hand, shower love on each other, on the other hand, don’t fail to poke fun at each other, and that is what it takes to make a marriage perfect. 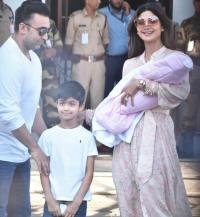 Raj Kundra has found a new way to make the most of this pandemic phase and not get affected by the adversity. Raj has started making memes on his married life with his wife, Shilpa Shetty Kundra, naming them as ‘#Rajfuntra’. In the first meme, Raj looked scared standing behind Shilpa as she looked shocked, atop it, he wrote, ‘Why is your phone ringing, when I am not calling you?’ Sharing the meme, he wrote, “Yeh lockdown jaan lekar hi jayega!!” Other than this, he shared two more memes, in which, one is extracted from Shilpa’s movie, Dhadkan and the other is from some chat show. Take a look at the memes below: 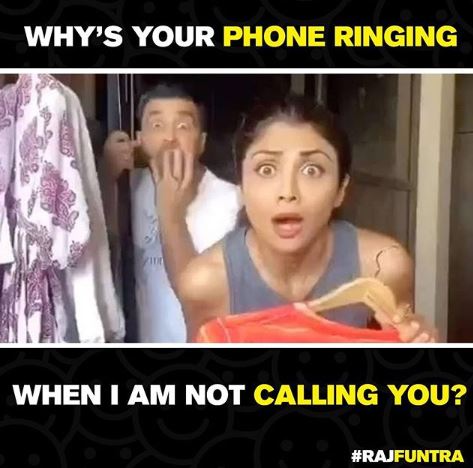 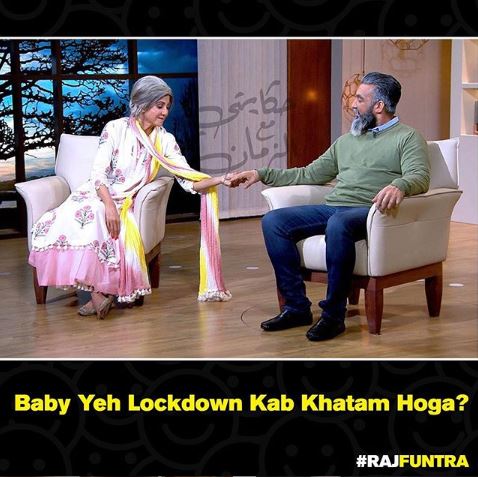 Shilpa and Raj were making hilarious viral videos on the now-banned app, TikTok. Their married banters were loved by their fans and used to leave everyone in splits. On May 13, 2020, Shilpa had taken to her IG handle to share a funny video. In the video, we could see Raj trying to kiss his wife, Shilpa as she arranged her wardrobe and then scolded him to not disturb her while she’s working. Shilpa then, in her dual role as their house help, had switched and interrupted the conversation, asking Shilpa (the wife) to make him understand properly not to kiss as he was not listening to her pleas. Then the angry wife, Shilpa had gone on to beat her husband up for kissing their house help. Shilpa had captioned the video as “Nazar hati, Durghatna ghati, Sacchai pata chalne par, Pit gaye humaare pati. @rajkundra9 Things you do to entertain yourself!! Some mid-week respite #HusbandWife #lockdown #fun #laughs.”

On May 5, 2020, Shilpa had posted another TikTok video with her hubby, Raj Kundra and they had depicted the bitter reality of married life. In the first part of the video captioned as ‘Shaadi Se Pehle’, the couple was seen laughing coyly. But in the second half of the video, captioned as ‘Shaadi Ke Baad’, Shilpa was seen snorting while laughing and Raj had looked shocked at the transformation. Shilpa had captioned the video as “How we change!!! The truth may be bitter but funny... Don’t think @rajkundra9 was amused! Anything that can make us laugh at this point! #funny #laughs #comedy #beforeandafter.” (Don't Miss: Divya Agarwal's 'Nanad', Akshita Sood Sneakily Sends Her Picture Of Boyfriend, Varun Sood)

May 08, 2020, was no different as the couple had served another hilarious video to their fans to laugh on. Shilpa had taken to her Instagram handle and had posted a hilarious video with her hubby, Raj. In the video, we could see Shilpa bringing an aalu ka parantha for her hubby but just having a look at the parantha, Raj had complained to Shilpa for not putting any potatoes in it. After hearing this, Shilpa had replied saying, “Aalu kaha hai, Kashmiri Pulao main Kashmir dikhta hai kya tujhko, Aur toh aur, Banarsi saree main banaras najar aata hai kya tereko, baat karta hai!” Hearing Shilpa’s epic response to his question, Raj Kundra had simply lowered his head in utter disappointment. Along with the funny video, Shilpa had written, “Food for thought!! #fridayfun #laughs #comedy #cray #food.” (Recommended Read: Deepika Padukone's Birthday Gift For Husband, Ranveer Singh Is Related To His Professional Work)

We totally loved Raj Kundra and Shilpa Shetty Kundra’s married life memes. What about you?