Priyanka Chopra reshared Nick Jonas' post wherein he was seen getting a tutorial from Shakira on how to ace belly dance. However, it was Priyanka's cute reaction which caught our attention!

Global icon, Priyanka Chopra and her singer husband, Nick Jonas had embraced parenthood on January 22, 2022, with the arrival of their daughter, Malti Marie Chopra Jonas into their lives. Since then, the duo is seen enjoying the new phase of their lives to its fullest. Glimpses of the same are found on their respective social media handles. However, even after doing all parental duties with complete dedication and love, the much-in-love couple never misses a chance to paint the town red with their mushy romance and fun banters.

On the occasion of Father's Day, i.e. June 20, 2022, Priyanka Chopra had taken to her IG handle and had given a cute sneak peek of her baby, Malti Marie Chopra Jonas along with her daddy, Nick Jonas. In the picture, Malti had looked adorable in a red-coloured floral printed ruffle detailing dress. Moreover, the father-daughter duo had twinned in customised sneakers, where Malti's shoes had shown an 'M' customised on each pair, while Nick's sneakers had 'MM's Dad' written on it. Along with it, Priyanka had penned a heartfelt note dedicated to her cutie daughter and her loving husband, Nick on his first Father's Day, which could be read as:

"Happy 1st Father's Day my love. To watch you with our little girl is my greatest joy..what an amazing day to come back home… I love you.. here's to many more." A few hours ago, Nick Jonas took to his IG handle and in a collaborative post with the popular singer-dancer, Shakira shared a funny video, wherein he can be seen attempting belly dance following her. In the video, Shakira can be heard saying, "You know I would pay to see Nick Jonas do a belly roll", as she was seen teaching Nick, how to copy her moves. To this, Nick replied, "You see, my body doesn't do that." Sharing the hilarious video, Nick wrote, "The difference when your hips don’t lie vs when your hips DO lie." And watching this, Nick's darling wife, Priyanka Chopra couldn't resist resharing it on her IG stories with lots of laughing with tears, clapping and red heart emoticons, expressing her genuine emotions. She also wrote:

"A for effort baby." 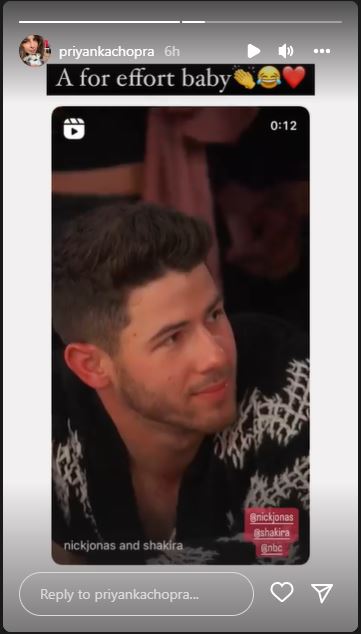 In an interview with his brothers Kevin Jonas and Joe Jonas for People magazine, Nick Jonas had opened up about his daughter, Malti Marie Chopra Jonas' critical condition during her birth. Nick had pointed toward his darling wife, Priyanka Chopra's post, which had revealed about Malti's premature birth and that the baby girl had to spend 100 days in the NICU (neonatal intensive care unit) before they could bring her home. The doting father had added that he and his wife have a lot of gratitude towards all the people who had been with the couple during their hospital journey. The newbie daddy had also heaped praises on his wife and had mentioned that his 'Pri' was a rock during the whole time. Nick had said:

"I think that what we shared on social media was just kinda the feeling that we had, the gratitude obviously to have our baby home. But also for each and every person that was part of her journey while in the hospital. It’s eye opening in a lot of ways. And I think it was really important for us to just share that. And make sure that people know that whatever their journey is, whether it’s something like we went through or diabetes or whatever challenges might come up, you’re not alone. And grateful to have a teammate in Pri who was a rock the whole time and continues to be."

Further, in the same conversation, Nick had talked about his new journey of embracing fatherhood. He had said that now for him, every day is a surprise, and it comes up with newer challenges that further, make beautiful moments. Sharing the same about his daughter, Malti, the doting father had added:

"Every day is a surprise and presents its own set of challenges and brilliant moments and things that just blow your mind along the way. I’m just having the time of my life watching her grow, it’s been a beautiful ride...I have a deep kind of insane love that I can't even describe." Aren't Nick and Priyanka's fun banters worth drooling for?

Next Read: Pranitha Subhash Reveals Her Daughter Is 'Daddy's Girl', Shares A Glimpse Of Her Baby With Hubby