Kriti Sanon and Nupur Sanon share a warm bond with each other. In a recent interview, Nupur talks about making a place for herself in the industry without being tagged as Kriti's sister.

Making a name for oneself in the world of glamour, where every day a new face emerges, becomes a difficult task. It becomes quite a task to establish a name in the industry, where there is no dearth of talented actors. Bollywood actress, Kangana Ranaut had raised many eyebrows when she had raised her voice on nepotism on Karan Johar’s chat show, Koffee With Karan. Making a place for oneself in Bollywood ruled by the Khans and the Kapoors is surely a tuff nut to crack. (Also Read: Tara Bhanushali's Adorable Picture Curled Up In Her 'Naani's' Arms Is Beyond Cuteness)

Kriti Sanon has proved her acting skills with her versatile and her sister, Nupur Sanon is also following her sister’s footsteps. Nupur, who has made her debut in the music video, Filhall opposite actor, Akshay Kumar has been carving her space in the glamour world. Kriti and Nupur share a warm bond with each other and the two often share adorable pictures with each other on their social media handles. From their personal lives to the kind of man they want to date, the Sanon sisters are always open about their camaraderie and give major sister goals. Nupur is working really hard on trying her luck in Bollywood. In an interview with the Times of India, Nupur has opened up about being addressed as Kriti’s sister and how she wants to carve a space for herself without her sister’s reference. Talking about the same, she revealed, “I am aware that right now I am known as Kriti’s sister and this is something I will have to break myself. I’m not saying that I am not proud of my sister, but I want to be known for myself, and as someone who works hard. Parineeti faced the same issue when she was debuting in Bollywood, but she carved her own identity in the industry. I want to do the same.” She further talked about how Kriti has never helped her to make her entry in Bollywood. She stated that the word nepotism doesn’t fit in her case as her sister, Kriti has never referred her to anyone and didn’t even ask anyone to get work for her. She also stated that since Kriti is there in the industry for quite some time and it is because of her that she is aware of a lot of things in the industry. She also revealed the one quality she has learned from her sister is to stay original without blindly following any trend. (Also Read: Mona Singh Shares An Adorable Picture From Her Wedding, Calls It Her 'Happily Ever After') 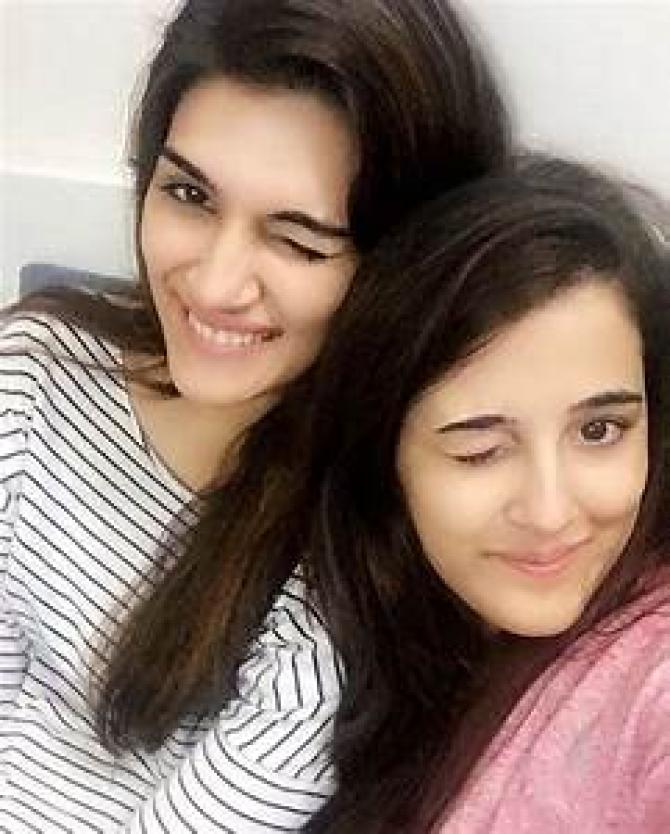 On December 17, 2019, Nupur had turned a year older and her sister Kriti had taken to her Instagram handle and had posted a video with some throwback pictures. Along with the video, she had written a heartfelt note which can be read as “Happiest birthday Nupsuuu!!! @nupursanon You i love you beyond words.. you’re my friend, my favorite entertainer, my buddy, my bro, my child and sometimes i-can-judge-people-better kinda mummy too! i’ll always be protective about u no matter how grown up u become!! I wish you all the happiness in the world... #Filhall enjoy this journey may you get everything u’ve been praying for... and more.. May this year be dreamlike and the best you’ve had till now!! Keep smiling my baby! Had to post this fanmade video.. its perfect! thanks @kritixsanon for making this sweettest video!”

Sometime back, Kriti and Nupur went to Canada for a vacation. On September 17, 2019, Kriti had taken to her Instagram handle and had shared an array of pictures of their vacation. Along with the pictures, she had written, “Our first just-us kinda trip together!! @nupursanon #SistaTrip #girlsjustwannahavefun.” (Also Read: Neetu Kapoor's Reaction On Her Soon-To-Be-Bahu, Alia Bhatt's Santa Gift Is Full Of Hearts And Luck)

Here's wishing Nupur all the best for her future endeavours. Who said that only a brother can protect a sister from all the problems in her life? Well, for girls, who are devoid of brothers find joy on the auspicious occasion of Raksha Bandhan by celebrating it with their sisters. Since the festival is all about being each other's shield