Brides these days have been experimenting with every aspect of their wedding. Now, they have also started customising their 'kaleere'. Here are 5 brides, who wore unique 'kaleere' at their D-day.

The chooda and kaleere ceremony hold a special place in the Punjabi culture. However, now, every Indian bride is seen sporting chooda and kaleere on her wedding day. For the unversed, kaleere signifies prosperity, which a bride brings to her new home. The bridesmaids tie the kaleere to the bride’s bangles or chooda as their good wishes and also to remind her of them after she gets married. Traditionally, the kaleere were made up of dried beetle nuts, dry fruits and coconuts combined with metal. While the coconut is symbolic that the bride never runs out of food in the new home, metal symbolises wealth and prosperity.

Brides these days have taken experimenting to another level as from bridal trousseau to their jewels, they want everything unique and buzz-worthy. Every bride looks for ways so that they can trend on social media- be it by opting for unusual wedding wear or by finding new ways to add a quirky touch. Now, the brides have started experimenting with their kaleeras too as they are now ditching the traditional golden ones for new designs and sizes.

Also Read: The Bride Designed Her Red Wedding Lehenga From Scratch, Styled It With Gold And Emerald Jewellery 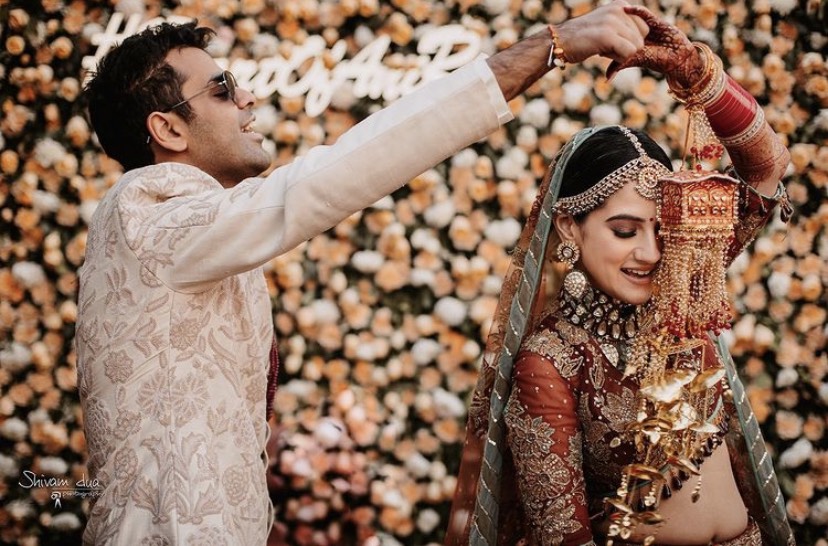 The new-age bride, Anisha Khanna had blown our minds with many unique things at her wedding, and one of them was her kaleere. For her wedding, she had opted for a rust coloured lehenga from designer, Rimple & Harpreet Narula with intricate floral embroidery over it. She had added a heavy polki choker neckpiece with a big nath and a matha-patti adding grace to her look. However, it was her doli kaleeras that had caught our attention. Along with the traditional kaleeras, she had worn a square-shaped kadha with doli kaleeras in orange colour attached to it from Dulhanama. 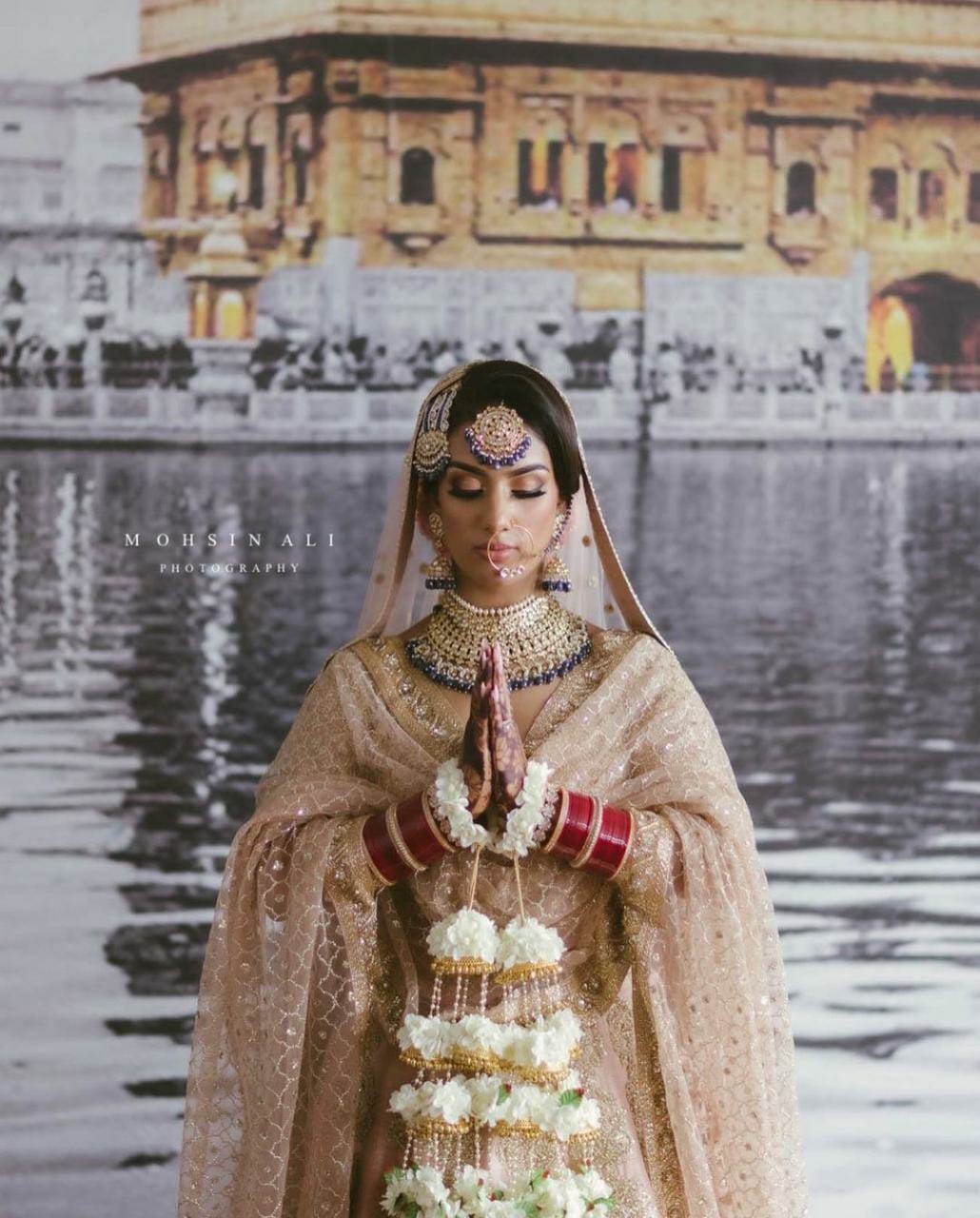 The bride, Neeta Dulani had trusted the ace fashion designer, Sabyasachi Mukherjee, for creating her extravagant wedding couture. Neeta had opted for a pastel pink-coloured lehenga choli, where the choli had a deep neckline and was intricately embroidered with golden embellishments and crystals in floral patterns. She had completed her look with red chooda but what really caught our attention was her floral kaleeras. She had worn white carnation decorated three-tier kaleere. A famous makeup artist, Guneet Virdhi’s bride had got our attention for her unique kaleere. The bride had worn a red lehenga, heavily embroidered with silver thread work. Half of her lehenga was embroidered with baraat motifs with golden thread work. She had completed her look with a heavy gold choker set, a raani haar, matching earrings, a sheesh patti and a nath. Talking about her kaleere, she opted for the ones made with real coconut (nariyal) and fox nut (makhane). It was further beautified with gold and pearl hangings. Influencer bride, Simran Bhatia Sharma had looked stunning in a Payal Keyal lehenga at her wedding. She had opted for an orange and maroon lehenga from their Marwar collection. Her skirt was heavily embellished with peacock motifs with a touch of yellow, green and gold. On the other hand, her maroon choli was cut out on a velvet cloth with embroidered floral motifs. She completed her look with pastel and pearl neckpieces, matching earrings and a broad matha patti. Accentuating her bridal look were her customised kaleere which had golden tassels hanging in three tiers. 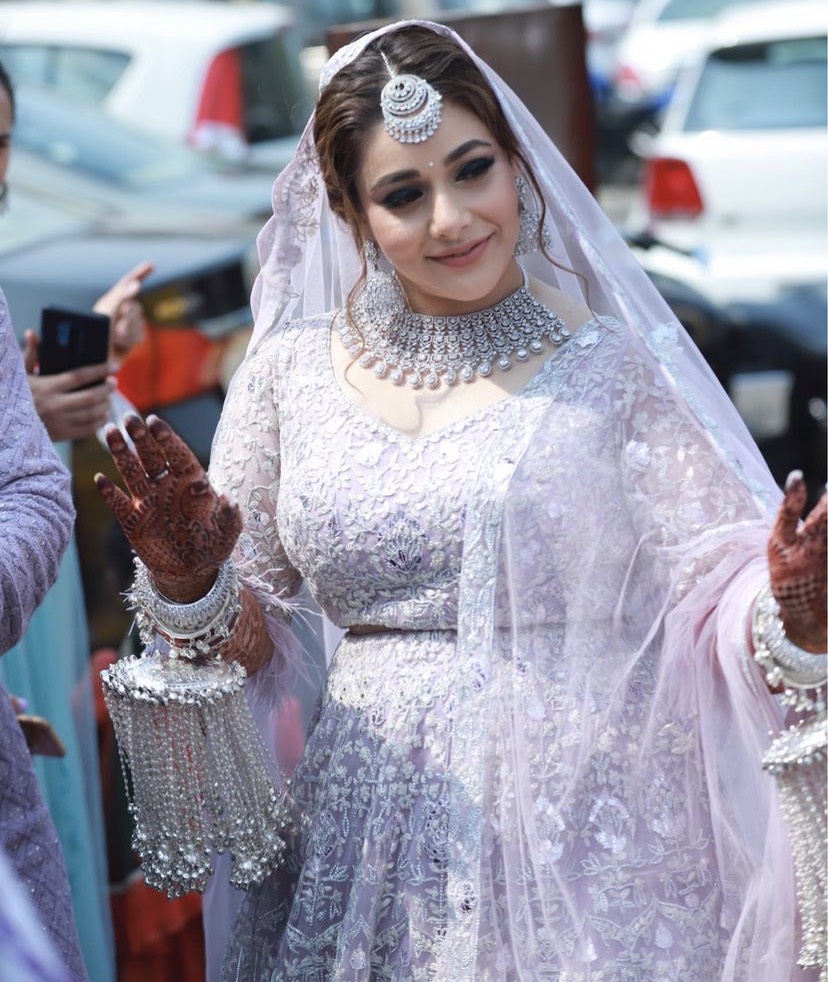 The makeup artist bride, Ritika Bhatia Marwa had opted for customised kaleere from the brand, Indian Wedding Kaleera. Ditching the long gold traditional ones, she had worn short silver kaleere perfectly enhancing her bridal look. A silver bangle with ghunghroo was attached with a silver metal plate which had various strands made up of pearls hanging with small jhoomars at the end, made for a perfectly trendy kaleera set. For the wedding, she had donned a lilac coloured lehenga with white thread-work all over it and silver sequin work in patches. She had completed her look with artificial diamond jewels.

With the passing time, the new age brides have revamped the bridal trousseau by experimenting with each and every aspect of the wedding. They have even changed the kaleera tradition by customising them according to their mood board. Which new kaleera trend you liked the most?

Next Read: 5 Brides Who Ditched Red And Wore White Sabyasachi Lehenga On Their Wedding Day