Brides these days are ditching the reds and pinks for their bridal outfit and are going a little hatke route. Real bride, Reema opted for an orange lehenga on her wedding. Checkout how she aced it!

Earlier, Indian brides only used to wear red on their D-day for it was considered shagano ka rang. But no more! Though even today, every bride celebrates the Indianess for they flaunt the best of their outfits, the modern Indian sassy brides have eventually ditched the prejudice of wearing only red. Modern brides are opting all the off-beat colours they can and one amongst the current picks is orange. And this is what the stunning bride, Reema Dutt selected for her own wedding day in Mexico at the Hard Rock Hotel Los Cabos. 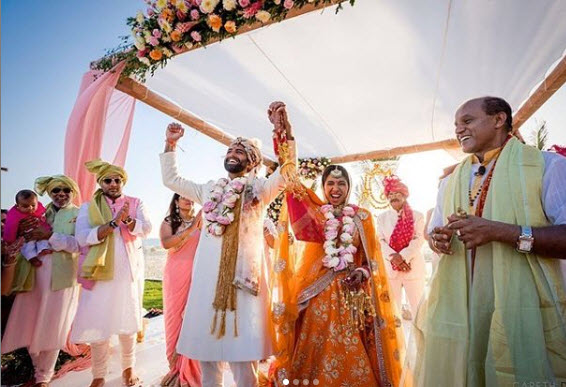 (Also Read: This Bride Wore A Green Lehenga With Minimal Makeup On Her Wedding, Looked Her Elegant Best)

Whether you talk of the sought-after Sabya’s or the experimental silhouettes, there is a spark in every bride as she looks the best while flaunting her bridal glow. Similarly, Reema too looked drop-dead gorgeous on her special day in an orange lehenga by none other than Sabyasachi Mukherjee. We all know how Sabyasachi aces the art of creating Indian apparels such as lehenga and choli, sarees, anarkalis, by giving them a contemporary minimalistic treatment. (Checkout: This Bride Not Only Rocked A White Lehenga But Also Wore Matching White Kaleeras On Her Wedding)

Reema Dutt, who happens to be the producer of Luminous Studios, looked stunning in her bridal ensemble in orange colour having golden embellishments on it with intricate detailing. The good-looking bride styled her look by going for double dupattas, one out of which she draped on her shoulder and other she kept on her head as a veil while the rest was free-flowing behind. 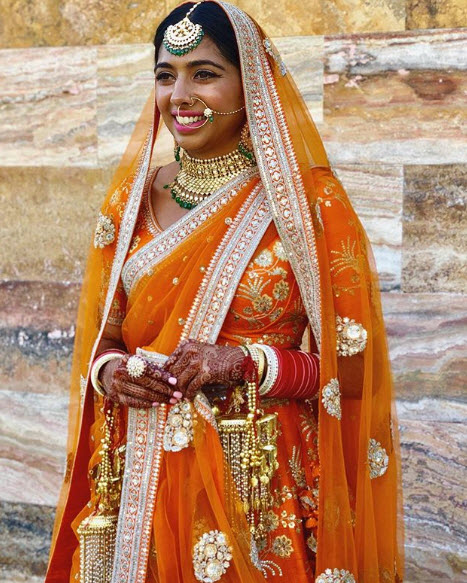 And when we talk of her accessories, she nailed it there too! Reema chose to go for a piece of contrasting jewellery with a golden-green choker along with a big maang teeka as well as matching earrings and nath. As far as her makeup was concerned, she kept it as minimalistic as possible with only a lush of powder-pink lipstick and a little highlighted cheek.

And how can we forget her red chooda that is adding to her magical look? Thanks to the wedding photographer, Gareth Davies Photography and the wedding planner, JC Castillo Weddings for treating us with such lovely pictures!

(Do Read: This Bride Wore A Rani Pink Lehenga With The Longest Dupatta For Her Wedding) 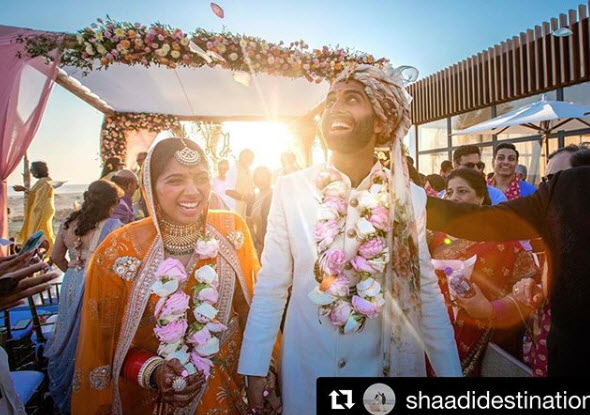 What do you guys have to say about such an off-beat colour choice of Reema Dutt? Do keep us posted! 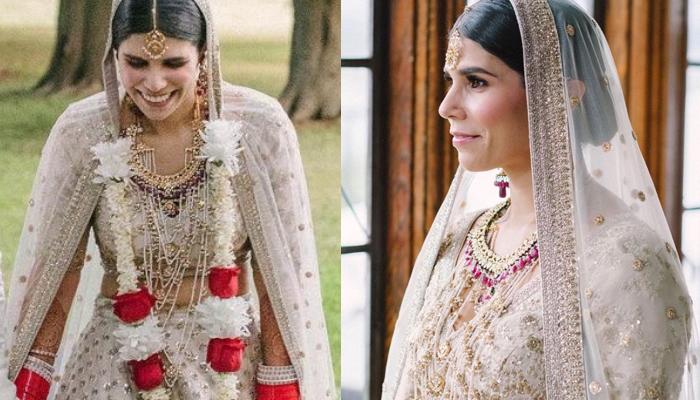 With every bride-to-be gearing up for the wedding season, we are witnessing ample of newly-wed brides, who stun us with their looks on their D-Day. Whenever we think of a wedding outfit, the laal shaadi ka joda for the bride is what comes to our mind. However, gone are the