It was only on May 10, 2018, when within a very short span of time, Neha Dhupia and Angad Bedi had gotten married. How did they manage their wedding dress? Neha reveals!

Has it ever happened to you that the ‘right one’ is right in front of your eyes but you turn a blind eye towards him/her only to realise that the one that you were looking for, never left your life the whole time? If you are nodding incessantly to this question right now, we bet you’ve married your ‘best friend’ and are in a very happy marriage! And the same goes for Neha Dhupia and Angad Bedi too, for the duo were always there for one another but never did they realise that they were destined to be together! (Do Read: Jassi Jaissi Koi Nahin Star Mona Singh About To Get Married In December 2019? She Reveals The Truth)

It was only on May 10, 2018, when within a very short span of time, Neha Dhupia and Angad Bedi had gotten married. It was such a hush-hush, rushed wedding that it was only after their Anand Karaj ceremony when Karan Johar had posted a picture of the duo, complementing each other in traditional wear, as husband and wife from the Gurudwara. Later, sharing a picture from their marriage, Angad had written, “Best friend... now Wife!!! Well hello there Mrs BEDI!!! @nehadhupia” and Neha had posted, “Best decision of my life.. today, I married my best friend. Hello there, husband! @angadbedi.” While every new revelation about Neha Dhupia and Angad Bedi gives us immense joy, in a latest interaction on The Love Laugh Live Show that the duo spilt more beans about their marriage. Since their marriage was conducted in a very short time, it was very difficult for the celebs to find an appropriate wedding dress. Unable to find a perfect wedding dress in such a short span, this is what they did, “It was very hectic for us to arrange wedding outfits in such short notice. I went to a mall to buy clothes but 3 hours before the Mehendi ceremony, I couldn’t arrange for the perfect outfit. I was shattered and was indulging on cupcakes in the middle of the mall but somehow we managed! We bought our wedding clothes on a returnable basis from the designers. That’s the best thing actually as I don’t think I have enough space to keep that Lehenga.” Isn’t this so cool? Further talking about their relationship, Angad Bedi revealed that he was commitment-phobic before he tied the knot with Neha Dhupia. The Soorma actor stated, “I was a commitment-phobic before getting married to Neha." To which, Neha quickly added, “I am always the one apologises and makes it up after an argument.” (Must Read: Ranveer Singh Is All Love For Deepika's Childhood Pictures, Fans Ask 'Is Good News On The Way'?) In an interaction with Humans of Bombay, Neha Dhupia had bared it all out about dating Angad Bedi and how their marriage happened. In the last few instances of their revelations, Neha had shared who pointed out to them that they are so meant to be with one another and how love happened, “Finally, at a party, Karan Johar took us aside & screamed, ‘Can you not see this?! Are you blind?’ You should’ve seen the look on Angad’s face. He had ‘I told you so!’ tattooed on his forehead. When we finally decided to get married, he didn’t go down on one knee & propose. He told me I’d already wasted 4 years & declared ‘Chalo Dilli!’ to meet his parents. Then he said, ‘Before you change your mind, pick an outfit because we’re getting married in 2 days!’ Earlier, I loved the set life. I wouldn’t give it up for anything. But now I look forward to coming home to him. I couldn’t imagine myself as someone who runs to the door, but when it’s time for him to come home, guess what I do?” 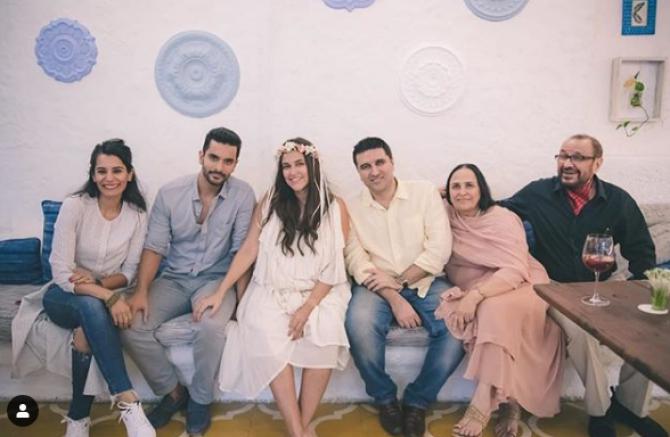 As hard as celebrities try to make their wedding a private affair, media and paparazzi always have a way of finding out little tit-bits about it, but for Angad Bedi and Neha Dhupia’s case, things were different! In an interview with the Bombay Times, Angad had revealed why their wedding was so private and low-key. He had shared, “I feel that our marriage was low-key because we wanted a low-key marriage. Because, when my father got married he had a very low-key wedding and he was the captain of India at that time. So, that time only his side of the family came and my mother’s side of the family came and they got married.” Angad Bedi had further added in the same interview, “And, I thought of it as such a beautiful story. So, when our turn happened I wanted it to be just like how my father had his wedding and we had only 50 people. Abhi shaadi aapne apne liye karni hai ya logon ke liye karni hai, pehele yeh decide karlo. It’s like each to their own. I feel a wedding is a private affair, we both believe in that. The marriage is not only between two people, it’s between two families. Yes, it’s great to celebrate, we had a great baby shower, and we called the entire industry and everybody came and blessed us.” (Also Read: Mohsin Khan And GF, Shivangi Joshi Dance Their Heart Out At His Birthday Bash With YRKKH Team) Guys, is there any last-minute wardrobe anxiety that you have faced at your wedding? Keep us posted!