Masaba Gupta shared a video of her mom, Neena Gupta, sternly asking her not to call her 'buddhi'. Netizens went into the 'every mom ever' moment.

Neena Gupta has believed in making her own path rather than travelling on the roads already taken. At the times when extramarital affairs were demeaned and infidelity was a taboo, Neena had given birth to her first child, Masaba Gupta, out of wedlock. Neena was in a relationship with the former West Indies cricketer, Vivian Richards and Masaba is their lovechild. Neena single-handedly raised Masaba, who is now a renowned name in the fashion world. On and off, we have seen Masaba and Neena’s fun-banters and New Year 2022 also began with the same.

On December 28, 2020, Masaba Gupta had taken to her IG stories and had shared how her mother, Neena Gupta had thought that she was dead as the designer had woken up late, which had never happened before. Sharing a picture of her mother sitting on her bed, atop it, Masaba had written:

“Good morning from Neenaji who told me she was going to come check on me cos she thought I had died because I woke up at 9.30 am (which has never happened before). It’s Christmas?”

Also Read: Mira Kapoor Tries To Play A Filter Prank On Shahid Kapoor, The Latter Says 'He Is A Perfect Face' 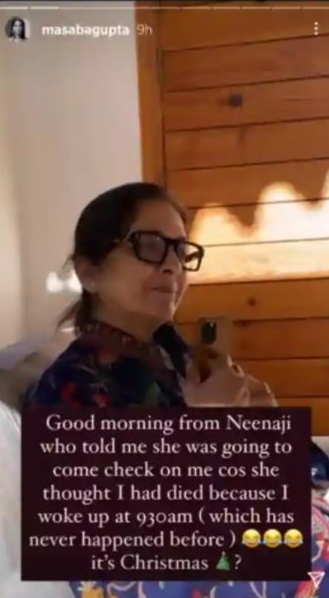 A few hours back, Masaba Gupta shared a hilarious video of her mother, Neena Gupta on her IG handle with a caption, “Asked mom what her resolutions are for the new year. Instead, she decided I should have some for her that she dictates.” In the video, Neena can be seen giving three New Year tips to her daughter, Masaba, and in one of those, she wittily warned the designer to never call her buddhi. She can be heard saying:

“Ok for New Year, three tips for my daughter, for 2022. One is, don’t scream at me, even if I am wrong. Two, don’t call me buddhi ever. And three that you already know, I mean so many people must have told you: slow and steady wins the race.”

As soon as Masaba posted the video, fans started pouring love on Neena and some even agreed with her advice. While one user commented, “Why are all moms the same?”, another one wrote, “I will tell this to my daughters.” One user called Neena a classic mom and commented, “Classic moms.”

Recommended Read: Pooja Banerjee Shares A Picture From Her Maternity Photoshoot, Flaunts Her Baby Bump In A Monokini 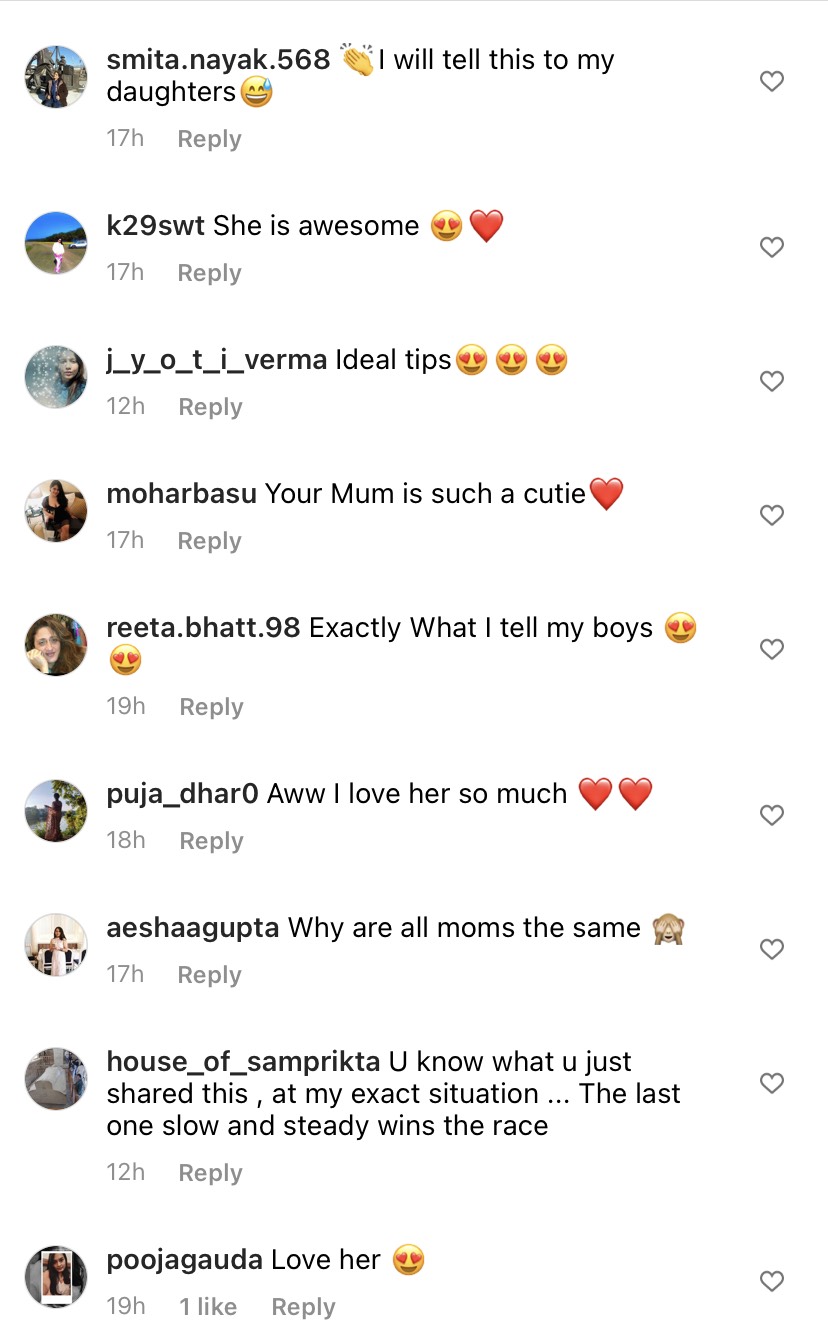 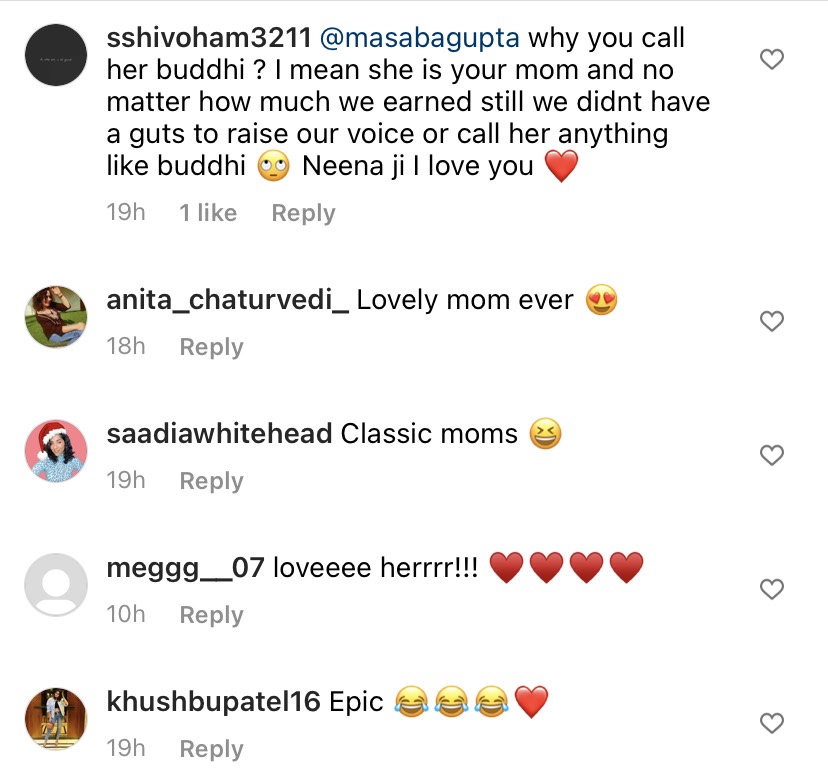 In an interview with SpotboyE, Neena Gupta had revealed that having Masaba was the best decision of her life. Revealing how she would like to change certain things if she gets to live her life again, the Badhaai Ho actress had said:

“Having Masaba is the best decision of my life. But if I had to live my life again I’d want to have a family and a husband to support my parenthood. I’d want the child’s father with me. Not so far away.” 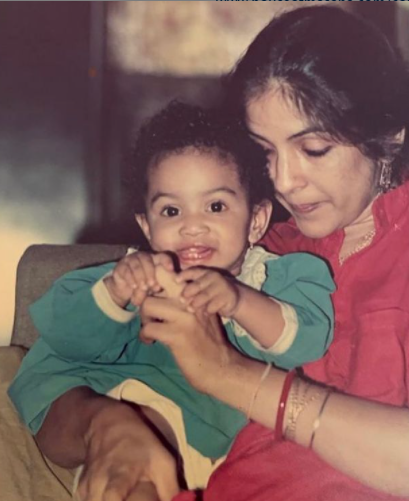 For the unversed, it was in 2008, when Neena Gupta had tied the knot with a Delhi-based Chartered Accountant, Vivek Mehra, and had started her married life.

Next Read: Shaheer Sheikh Shares A Family Picture With Wife, Ruchikaa And Their Newborn Daughter, Anaya 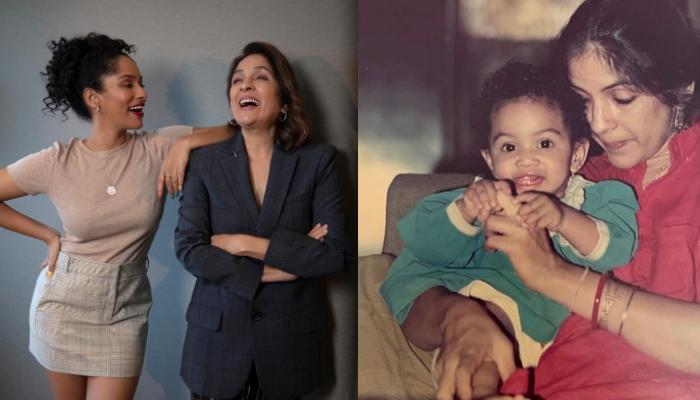 Veteran actress, Neena Gupta is well-known for breaking stereotypes and living ahead of her times. She has always lived her life on her own terms and never hesitated to make brave choices. Back in those days, when infidelity was a taboo, Neena had decided to raise her love child, Masaba Gupta with the cricketer, Vivian